It had become one of the most famous MMORPGs of the 2000s in its breakout era, allowing for many updates to be released for the game's decade-long lifespan before it would abruptly close. Despite that, it still manages to have a following and some private servers to this very day.

When designing the setting for their rendition of Toontown, they took inspiration from how it was depicted in the film Who Framed Roger Rabbit?, the Toontown section in Disneyland, California and Duckburg from the Ducktales series.

A game based on an earlier build of Toontown Online was released as Toon Tag. It was also playable at the Internet Zone in Disney Innovations East, Epcot for nearly ten years before the attraction was shut down. It involved a game of tag where four different players could either play as Mickey, Minnie, Donald or Goofy looking for others around the map. Very few images of the Tech Demo survive on the internet, and a lot of the elements and graphical style seen in the pictures were repurposed for what would be Toontown Online.

A VERY early rough map draft of Toontown was drawn, which were divided into four corners representing the negative sides of everyday life in the form of a checklist below. This seemed to be an early idea of the Work Vs. Play theme that before Suits were even conceptualized. Interestingly, the four corners would also be the basis for what would be the Cog Headquarters in the final. 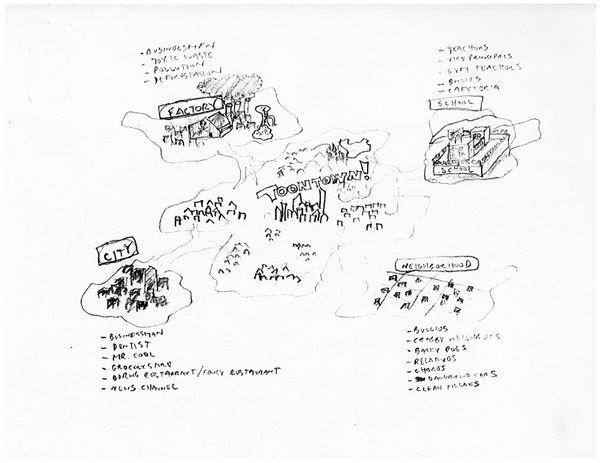 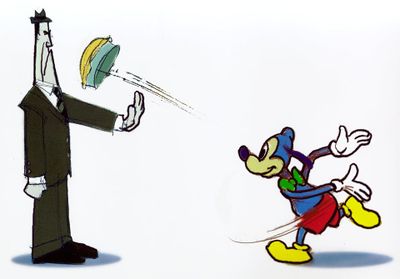 The earliest artwork of Flippy using a Throw Gag. Interestingly the blue color would
be brought back in his finalized design for the game's release.

The designs for Toon species were drawn from the "rich history and traditions of Walt Disney animation", where each of them had to be unique so they can be easily identified. The goal in mind was to make the player feel at home with Mickey Mouse and other Disney characters.

A variety of different options were drawn out.

During development, Cogs were originally called Suits and were businessmen rather than just robots. From the beginning, they were designed in four different types; Social, Money, Legal and Corporate. A rough sketch of the enemies and the types belonging to them were first drawn up in many different shapes and body sizes; 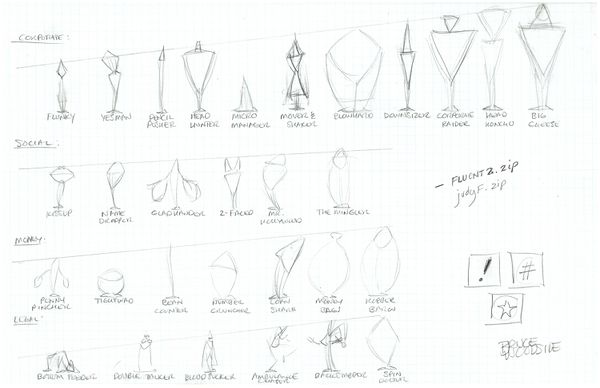 Many of the ideas made it to the final, though there are some changes:

Later, the types of Suits were decided and all equalized into eight. 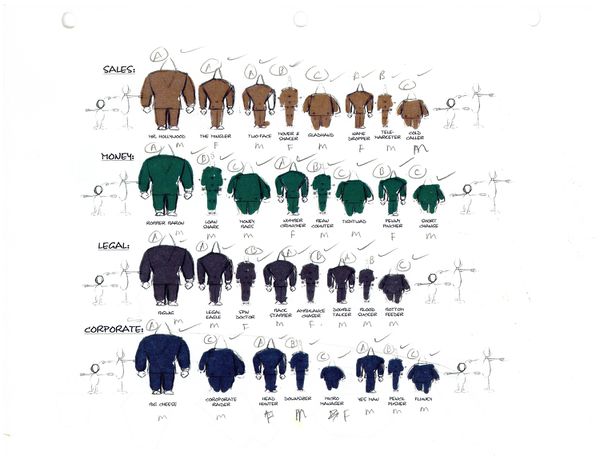 Some changes still remain in the height chart.

A much later version of the suits used for 3D modelling reference, with the finalized Corporate outfit colors has some interesting changes: 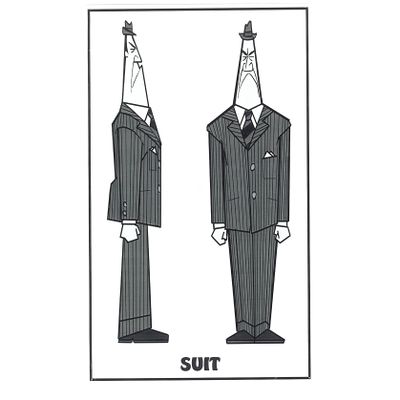 This is the finalized design of the Downsizer Suit before they were redesigned.

The very first conceptual art of Flippy fighting a Cog. The original design of Flippy and dog toons in general were slightly different, taking design notes from Mickey Mouse and Goofy at this point. A slightly later artwork shows Flippy, with a somewhat later design using an Anvil on a Cog.

Originally when Suits were defeated, they were supposed to turn into clowns that would run away in fear and shrink to a smaller size. According to the Spotify leaks and filenames in the final referring to them as "suits", they were conceptualized halfway through development.

The idea was negatively received by The Walt Disney Company, considering that they were executives of a corporation, and came off as a mockery of it. It was so lambasted that Roy E. Disney sent an angry letter to Jesse Schell ordering the project to not be released. The solution was resolved when Suits were changed to robotic businessmen, where Bruce Woodside noticed that giving them bolts in their design would be enough to distinguish them from the original plan.

Fighting With Other Toons 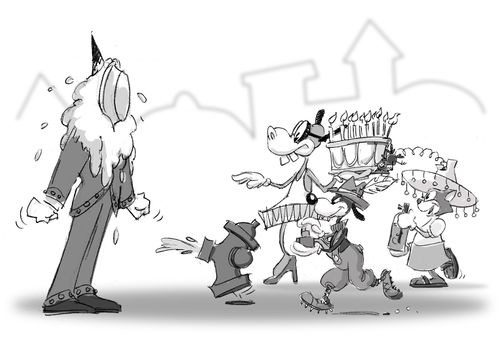 This artwork shows a concept of other Toons participating in Cog Battles, which details a rough idea of the setting and other appearances of Toon species. The gags present in the artwork appear in the final, with the exception of the fire hydrant, which may have been reworked into the Fire Hose. Interestingly, Toons are seen wearing Accessories there, which would not be added until very late into the game's lifespan.

The Pick-a-Toon selection screen was originally intended to take place within the Ritz Carltoon Hotel, an obvious play on the real life Ritz-Carlton Hotel chain. Notably this artwork features a button labeled "Exit to Blast", blast being an online Disney subscription service that would've had Toontown Online bundled with it.

A VERY early rough map draft of Toontown was drawn, which were divided into four corners representing the negative sides of everyday life in the form of a checklist below. This seemed to be an early idea of the Work Vs. Play theme that before Suits were even conceptualized. Interestingly, the four corners would also be the basis for what would be the Cog Headquarters in the final.

Alpha Mockup When other neighborhoods started to become implemented, this map came to be. 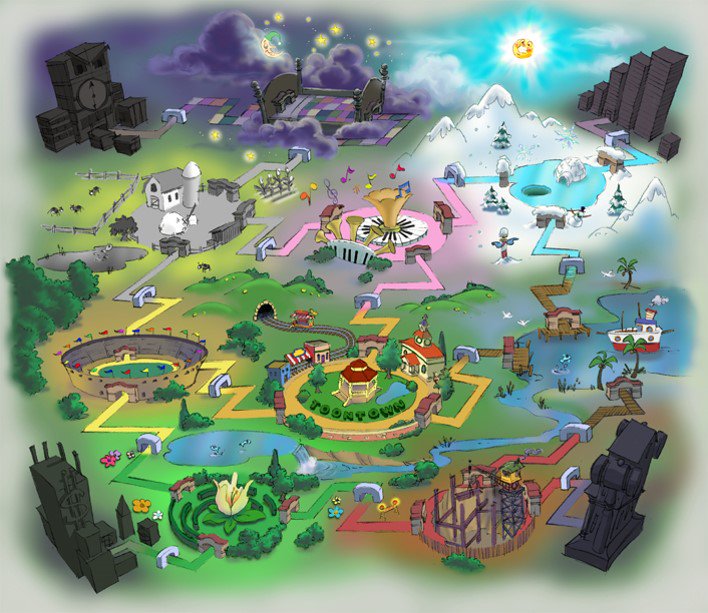 The blurred-out locations had remained to be a mystery in the fandom for years until YouTuber LoopyGoopyG managed to get a full and unblurred graphic in 2017, revealing the locations. The map shows an interesting number of changes and scrapped locations; 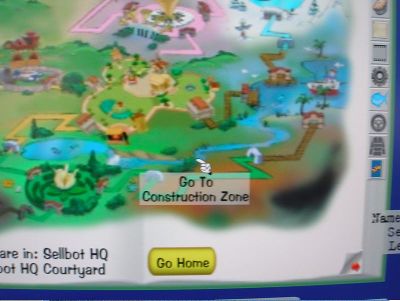 Playgrounds were originally called Safe Zones, and worked much like they do in the final game. Though, each of them planned to have a specific gimmick in the form of an unstructured activity solving.

A total of 15 neighborhoods were originally planned, each of them having a street and an important gimmick specific to them.

It was originally called Downtown Toontown in development, and was planned to be separated into different districts amidst the large size. A lot of features were planned for the Playground but were cut for time or technical limitations;

A second part called North Toon Square was considered as an additional location, with some more features;

In the game's early development stages, there was never a Trolley and an arcade-based minigame hub was originally considered. Four different styles were originally decided before being ultimately reworked;

It's also worth noting that a bus was part of the idea, which may have been a loose inspiration for the Trolley.

Minigames were originally planned to be based on old Disney cartoons, nearly all of them having a unique theme. All of the minigames concepts never made it into the final game;

Throughout the game's lifespan, Jesse Scnhell came up with a extensive list of ideas before he had left upon the game's launch in June 2003; 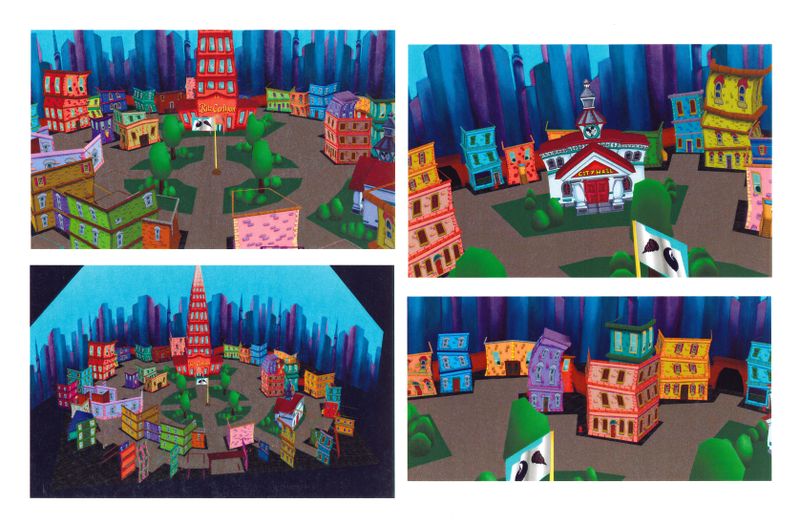 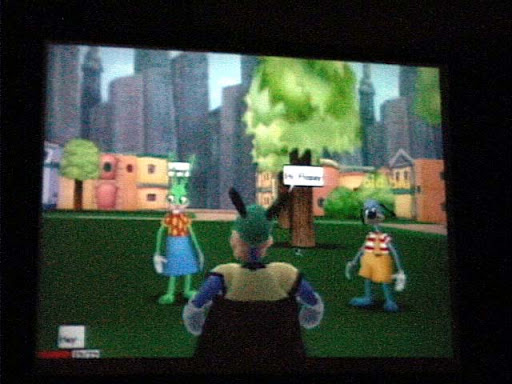 The oldest known screenshot of Toontown Online was posted by Jesse Schell in 2013. 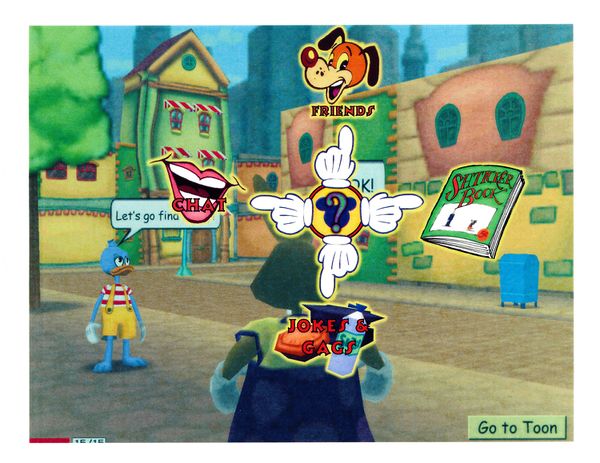 From a slightly later build, the Navigation GUI was different.

Around the same build as the previous screenshot

Dated January 7, 2000. The basic outline of Toontown's other locations is nailed down. 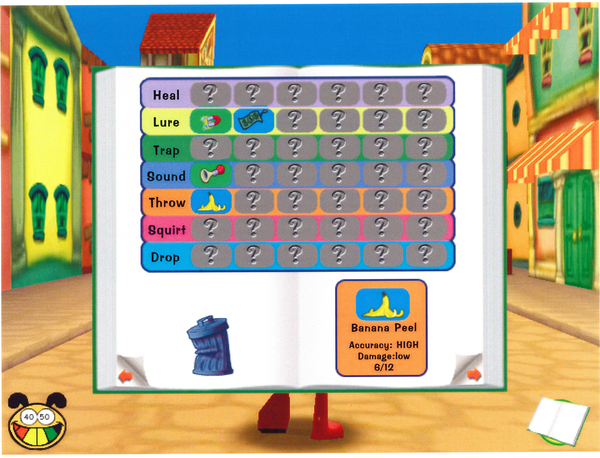 A mockup screen for what the Gags page would look like in the Shticker Book, running on a slightly newer build of the game. This appears to have been made sometime after the early Gag icons from the Spotify source leak, placing it close to fall.

A slightly later and redone Toontorial sequence was planned which is drastically different from what was seen in Beta 1, dating on August 25, 2000. 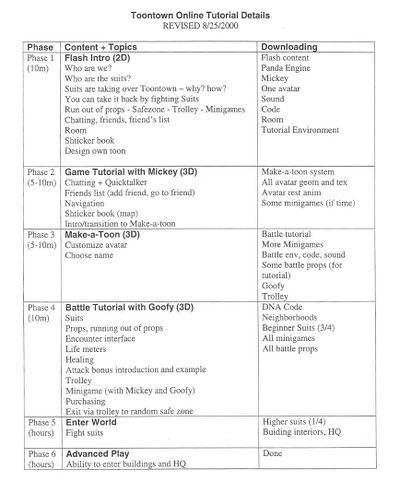 Quite a few differences can be found:

It was at the point when Suits were renamed to "Robots". In order to not waste their work, Bruce Woodside added bolts to the original Suit designs to make them look more robotic, which turned out to be a good decision.

Between the Safe Zone Activities from September and the Designer's Atlas from February 2001, the renders of the Playgrounds are made, except in a very early state. 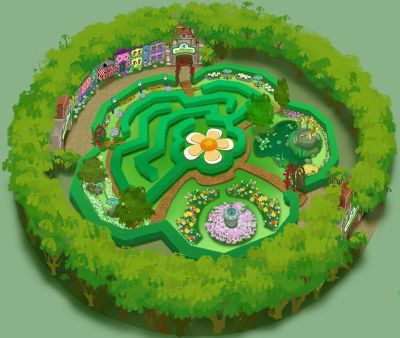 From the installer of Toontown Online Beta 1 in September, they show drastically earlier images of the game.

Create-A-Toon was slowly starting to take its final form in this build, in comparison to the Alpha leaks.

Quite possibly the earliest screenshot out of the batch, resembling that of the earlier builds.

A few developer images were released.

https://old.reddit.com/r/Toontown/comments/ivz2aa/the_toontown_fy1011_story_taken_from_the_toontown/ From the Toontown Online Development Archives, there is a story diagram detailing the plans that would happen throughout 2010-2011.

Many of the plans had happened over the timespan, with the notable exception of the "Supreme Cog Leader" which never appeared at the end of the fiscal year of 2011. It was meant to be a prelude to Toontown 2.0.

https://old.reddit.com/r/Toontown/comments/geysmx/in_light_of_recent_events_take_this_neverbefore/ Besides Sellbot Mover and Shaker Field Offices, there were planned to be ones for other Cog Types.

Retrieved from "https://tcrf.net/index.php?title=Prerelease:Disney%27s_Toontown_Online&oldid=1331779"
Categories:
Cleanup > To do
Games > Games by content > Prereleases