A promotional video, possibly from E3 1998, showing some early gameplay footage. Some of the footage is reused in other videos, but this is the only known copy with the original music intact.

This music is a combination of three tracks from the game: Area 51 Escape, the unused track in the final ROM, and another track not heard anywhere else...in Perfect Dark, at least. This was a "sketch" composed by Graeme Norgate, who later ended up revamping it as "Scotland the Brave" in TimeSplitters: Future Perfect.

The footage in this video seems to come from the same source material as the one above, however it has some footage not seen in that video, and sadly is also missing a lot of it. The parts that are present in both videos are much clearer in this one.

Even more footage from that same source. This has a lot from Area 51 that is missing in the other two.

The relevant part of the video starts at 7:31. There is even more early footage of Area 51 in this video, including a four screen multiplayer game!

A heavily processed video, however it does show a few scenes that aren't in any others, including some more of Deep Sea. Don't be fooled by the "multiplayer" sequence, since the top left screen isn't even in the right level!

An E3 1999 promo video from N64 Magazine which contains a lot of Perfect Dark footage. Much of it is captured from the same source as the other videos, but there is some footage of a later build being played (rather poorly) at 11:11. The GoldenEye sniper rifle is seen in a multiplayer game.

"In a world where dark secrets hide in glass towers..."

This is the official promotional trailer for the game, and it shows a ton of early tests of weapons and allied characters. The solo setup for the Skedar Combat Simulator arena is briefly shown.

This video is unique: It's 34 minutes of unaltered gameplay footage, playing through the first three missions on easy (Agent) difficulty. 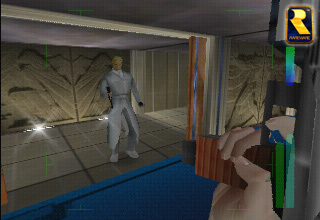 Early weapon behavior can be seen in all three videos, but the official trailer shows most of it. Some points not specific to any weapons in particular:

While this already has its laser sight modeled in early footage, there is no visible laser beam.

The MagSec was originally called "lees gun" (possibly named after Lee Musgrave, who is listed in the credits), an obvious placeholder, and is noticeably less detailed. Interestingly, a "lees gun #2" can be seen in the inventory menu, but it is never drawn, so it is unknown what weapon this became. 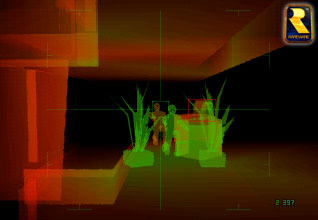 The FarSight's precursor was the z2020. This weapon used the same model, sounds, and aiming sight as the Dragon does in the final game, but only loaded 8 rounds of ammo and had the X-ray rail gun effect when aiming like the final FarSight. It is used several times during the official trailer, including once to "erase" the computer executive in dataDyne Defection.

Additionally, in both the trailer and the shot to the right, a red box is seen drawn around a destructible prop. It's not known if this was a feature of the weapon or not, but it's not seen when using any other weapon except the CMP150, which only highlights characters, not props.

Weapons from GoldenEye were used as placeholders. Several of these can be seen in the early promo videos.

The ECM Mine originally used the same model as the Tracer Bug.

This was known as both the "Data Thief" (a GoldenEye remnant) and Comms Uplink during development. In the half hour of footage, it doesn't have a first person model.

This is the only known shot of an earlier menu style. Notably, it is much clearer than the final menu, and it seems to lack some of the effects that make it look like a projected hologram. The shades of blue used are darker, the title bar gradient is simpler, and text is white instead of cyan. The menu itself is larger, there is no space under the title bar before the Background heading, and no padding for the actual briefing text. There is no eyepiece HUD projector or health and shield bar yet, and the background isn't blurred. There's no indication if other menus are available by pressing Left or Right, either.

The ammo bars are known to have gone through two revisions before the final style:

The border of the radar in multiplayer was originally an octagon instead of a circle.

The aiming sight originally turned red when hovering over any object, including props and friendly characters. The sight only changes on characters in the final game, and friendly ones get a blue square instead of red.

As seen at 19:26 in the half-hour of footage, objectives used letters instead of numbers when completed, similar to GoldenEye. At this point in development they're already numbered on the objective list.

An empty Carrington Institute can be seen in the early promo. Instead of an elevator, there is a ramp that leads to the second floor offices. Since the video only shows one elevator, it's not known if both were ramps at this point in development.

This seems to have been used as a testbed for weapons and character models, which isn't surprising considering it's the first mission in the game. Some notable examples:

The video with a half hour of footage shows an unpolished version of the mission. Luckily, despite playing on Easy difficulty, the player does the segment with the executive anyway. The most interesting aspect is the dialogue, a good amount of it was changed for or dropped from the final mission.

This mission is played on Medium (Special Agent) in the half hour of footage.

This is the last mission played in the half hour of footage, again on Medium.

The Punk Pond was originally called the Pink Pony. The textures for the old sign are still in the image bank. There is no hint that there was an interior to the bar at this point — there is a wall where the doorway is in the final background and the windows are blacked out. 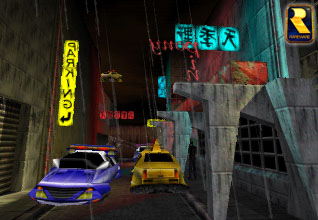 A number of early shots show a hovering police car, like the one used in the mission intro, on the same patrol route the G5 robot uses in the finalized mission. The car used in the cutscene is still present in this shot, however, showing it was not the same one. 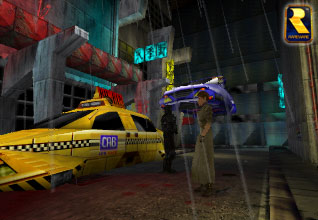 A second yellow taxi cab was originally used in place of the limo — this even made it to the final mission selection icon. This particular shot shows Joanna in third person, which is a bit weird. 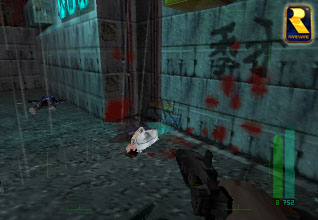 dataDyne shock troopers were used instead of G5 guards. There are no signs of FBI agents in early screenshots. Civilians used the office suit and casual bodies, which doesn't make much sense in the pouring rain. However, it still makes a whole a lot more sense than the CIA agent photo badge they wear in the final mission!

The early preview shows, compared to other missions, a ton of footage from Area 51. Interestingly, none of it can really be tied to a specific mission – it seems to include elements of all of them. This may simply be how the footage was cut and assembled for the video, however. At this point in development, the level is almost completely devoid of props, even most of the doors aren't in place yet.

The "Games on Film '98" preview has more footage of Maian enemies in Area 51.

"Lo mejor de Nintendo 64" has a few scenes not in either video above.

Nintendo 64 Catalogue Officiel 98 shows a very interesting difference – multiplayer! Only a quick glimpse is seen, but it's definitely a real game and not four separate scenes spliced together.

The French promo has slightly extended cuts of footage seen in the other ones. 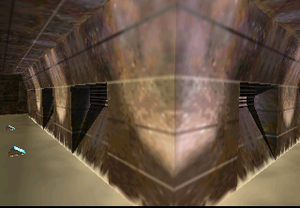 The lower bunker in the final background.

This area underwent a ton of changes! Most notably, the bunker is entirely different. At this point in development, it's using the same style as the lower bunker under it that contains the air intercept radar, but seems to have open windows. The wall sectioning this off from the area Joanna starts in the final Infiltration mission is shorter (there's a wall forming a pointless inlet alley area along the outer area in the final version, it's possible the wall simply curved along this branch in earlier builds); the main gate isn't present. There's also a second hoverbike here, something not featured in the final Infiltration or Escape missions, as anyone who's played them in co-op is disappointedly aware of. The wall in back, separating this area from the minefield, is white corrugated metal with a red stripe, instead of being a normal brown wall like it is in the final background. 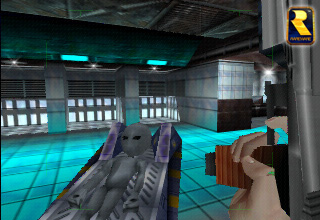 Joanna has taken Elvis to the showers here. This isn't possible in the final Escape mission, since the doors leading to this area are locked until you revive Elvis. 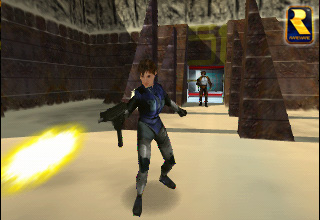 Still from a cutscene where Joanna fires a ZMG (9mm), which can be seen in most of the early videos. The doors and autogun are missing, and A51 guards are being used everywhere at this point in development.