TimeSplitters: Future Perfect is the latest entry in the series, and the only one to be published by EA. This entry would sprinkle in modern elements from other shooters like Halo, while still keeping its classic tropes. Unfortunately, this would end up being Free Radical Design's last entry in the series before the trifecta of Haze, the 2008 recession, and Star Wars Battlefront III's woes drove them out of business.

It's time to split!

Character selection animations exist for the TimeSplitters 1 character, "Mary-Beth Casey". The lead character artist confirmed that they wished for this character to return in TimeSplitters: Future Perfect but this never happened. 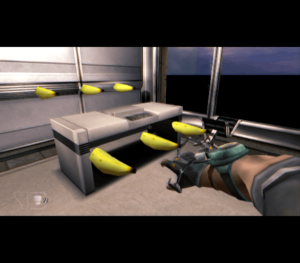 These bananas can be found in the level Breaking and Entering. They can be located by using game modifications to enter the room in which you must defend Amy Chen before the sequence plays. If entered a certain way guards will spawn shooting at these bananas, suggesting they are used as targets for the guards to shoot during this sequence and made invisible when it begins.

This texture is technically used in the intro cutscene, but cannot be seen.

A character from TimeSplitters 1 and 2 who unfortunately failed to make the cut this time around. His sound effects and character select image are all that seem to be left of poor old Impersonator.

Normally, the Temporal Uplink is unable to grab characters unless they have a special flag set. This flag is to only ever set on one specific enemy type in one specific level (the medibots in Something to Crow About) so is widely unused. However, the Uplink has special functionality for grabbing zombies where it will pull their head off, killing them instantly. This turns the Uplink into a very powerful "anti-zombie" weapon.

The game actually checks for the flag twice. The second check is done under conditions where all zombie characters with detachable heads would pass the check too, meaning that it's likely the Uplink was able to be used against all zombies at some point before the feature was cut.

The Lights Out Minigame was a cut minigame that was originally pitched to be used in place of the pipe solving minigame. Programmed by Charlie Cole, people played the prototype but it wasn't received well. This minigame was scrapped in favor of the pipe minigame after Hasit Zala (Team Leader) showed the team his first published game from a magazine which was the pipes game written in basic. This lead the team to move towards the pipe minigame over Lights Out.

There are still references left in the code for the Lights Out minigame but much of it has been stripped out. It has been left in a non-functional state and is not accessible in-game.

Out of these game modes, only Regeneration appears to work. You can apply the following GameShark / CodeBreaker code for the NTSC-U PlayStation 2 version of this game to enter the modes:

With the above code on, press one of the following button combinations after selecting a game mode in Arcade to force the unused game mode of your choice:

Oddly enough, the final game still makes mention of One on One, with a loading screen line asking "Have you played One on One yet?", even though no one ever has.

A few unused cheats are left in the game. These cheats were once in the cheat menu from the main menu, however they are no longer a part of it:

It appears Skating and the fourth cheat are no longer present in the game. However, the following GameShark / CodeBreaker codes can re-enable Infinity Ammo and Invincible:

Another odd unused cheat that makes the player (and enemies) only die from pistol whips, hand-to-hand combat, or explosives can be re-enabled with this code:

There are five more unused cheats. Only one of them functions, which makes the player invisible. The other four unfortunately no longer function as the game never checks the spot in RAM if the addresses are set or not. Every time a map loads they are set to zero. Enable invisibility with this code:

There are various sound files stored in the game's "sounds_e.pak" that go unused.

Pain and death sounds for a character from TimeSplitters 2 called The Impersonator. Unfortunately he didn't get to appear in Future Perfect and so all that remains are his character select image and his sound files.

This dialogue would be spoken by the scientist clinging to a tree the player must save from the worm creatures. The latter two lines suggest this scientist would originally be in a different location and fill the role of the removed scientist below.

This dialogue seems like it would be spoken by a scientist near the end of the level. The player was going to receive a special weapon to use against zombies here. This weapon may have been cut from the game or re-purposed as the Injector.

This dialogue doesn't have a clear place in the level but it's quite obvious what is going on. The "this stuff" the scientist is talking about could suggest that the weapon you were to receive in this level was the Injector.

This dialogue would appear to be related to unused objectives involving a ghost. It would appear that this was originally to bring objects to the ghost's resting place but was changed to killing a demon to free the ghost (something much more fitting for the game's gameplay). The only possible remnants of this quest in the game is the child ghost that appears in this mission who is hostile in the final game.

These cut Anya lines suggest some minor changes that happened to the level during development.

All of these barring the second appear to be alternate lines for the soldiers in this mission. In the final game the soldiers just re-use dialogue from the first level.

This line seems to be spoken by the Cortez the player is controlling, something which never happens in the game.

These lines are for the assault gamemode on the Mars Prison map. It seems that these announcer lines were recorded especially for it; however, in the final game the default announcer is used.

The flying robot enemies seen at the end of "U-Genius, U-Genix" and throughout "Something to Crow About", while extremely similar, are in fact different enemies with different behavior and models. Interestingly, the variation used in "U-Genius, U-Genix" is actually given a name in the game's files, being labelled as the "Mark 1 Sentinel". Meanwhile, the version used in "Something to Crow About" is simply named "Flyingrobot". These names are never seen in-game as both enemies are named as "R-100 Series" fighters.

In the AI navigation data for "Mansion of Madness", the first room of the level has AI navigation nodes going up and to a door to the left that's boarded up despite no AI characters ever even going up those stairs at all. This was likely where the player would have went for the alternate path when the level was more ambitious and had 2 paths the player could choose.

The binary file for this game contains a series of URLs. One is: largedownloads.ea.com/pub/misc/TSFP/

It turns out that this URL pointed to a directory listing, which was active for many years. There were a series of files present:

All of these files look like tests, and indeed include the word 'test' in their name. Recc_maps.txt seems to be related to mapmaker levels and contains strings like this:

The PlayStation 2 and GameCube versions of the game feature white ghosts whereas the Xbox version of the game has red ghosts.

The GameCube version of the game has a ripple effect on loading screens while the PlayStation 2 and Xbox versions use much simpler waving effects.

In the PlayStation 2 version of the game, the number of beetles you fight in Mansion of Madness is massively reduced (quartered in singleplay and halved in cooperative) for performance reasons.

In the PlayStation 2 and Xbox releases of the game, the level Mansion of Madness has a subtle ambient fog effect. This was removed in the GameCube release.

It can be restored with an Action Replay code:

The Xbox version of the game received a small update that would allow the player to sign into Xbox Live when playing Challenges and enable leaderboards for the Challenges.