Star Wars Battlefront III was the planned third game in the franchise's Battlefront sub-series, developed by Free Radical Design and LucasArts, only to be cancelled in 2008. The prototype had been circulating for some time online before being leaked publicly on January 20, 2016.

This said, the game cannot be played by normal means, even on modified consoles. To boot this, you must use a development Xbox 360. A modified Xbox 360 will only be able to run it via RGLoader.

Contained in the build are a lot of assets.

Within a lot of filenames and the files themselves there are Wii-specific build files.

Present in the path \data\bf\ps3osfiles\savegame\profile' is a placeholder image named icon0.png. 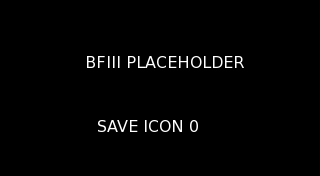 Present in the file default.xex are multiple calls to the PlayStation 3 system.

Although both bf_gold.xenon.xex and default.xex act and function the same, the file default.xex contains a lot of plaintext referencing errors, calls to other platforms like the PS3 and PC, and source filenames with paths.