Compared to the arcade version, it actually isn't too shabby.

At E6A0 (JP/US version), there is text for a debug screen that has not been accessed yet. It can be seen in some prototypes, like the one from September 1st, 1994.

At 12C3C, there's text for what would be an object viewer.

Starting at 02DFDD, there's also a list of all the objects compiled into the game. 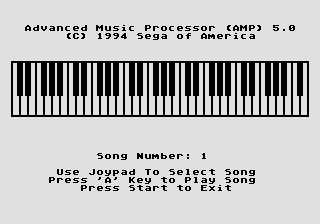 Pause the game just before a mission begins, then press Up, Right, Left, A, Down, C.

In addition to the Time Reset (Left, Down, A, C, Down, Up) and Timer Off (Down, B, B, Up, Right, Left) cheats, which require a six-button controller, the game has a disabled Shield Refill cheat. This code was present in the September 13 and September 14, 1994 prototypes but was removed from subsequent builds.

The values for the button sequence which would have triggered this cheat are no longer present in the final build, but the function to refill the Shields remains in the game, unused. The following Game Genie code can be used to repurpose the Sound Test cheat (Up, Right, Left, A, Down, C) to instead trigger the unused Refill Shield function. Obviously, this also makes the Sound Test unavailable.

On real hardware, the Game Genie is not compatible with the 32X. To use either of these codes with a flash cartridge, they will need to be patched into the ROM. These codes are modifying 0xAE0B (USA/Japan) or 0xAE23 (Europe) from 16 to 0C. The checksum at 0x018E-018F will also need correcting or zeroing; the 32X will skip checksum calculation if the checksum bytes are 0000.