Taking place after the events of A New Hope, Star Wars: Rogue Squadron is the video game where you fly around doing missions in various aircraft, and get some side story on Rogue Squadron itself along with Kasan Moor joining the New Republic. If you have played Shadows of the Empire, you may realize that this game is based on the success of its Battle of Hoth level.

Enter MAESTRO into the passcode option. It allows listening to the entire MusyX-composed Star Wars soundtrack through the High Scores menu, in the Concert Hall. 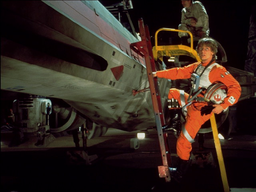 This background image was used for the title screen of Rogue Squadron on N64, but goes unused here.

The v1.2 patch included the Naboo Starfighter in addition to fixing a problem related to graphical corruption with a 3D accelerator card in 3DFX chipsets.