A spin-off of Star Wars Jedi Knight II: Jedi Outcast where you play as Kyle Katarn's Padawan, Jaden. This game features the ability to create a custom character and a custom lightsaber.

Most of these weapons are used by NPCs or mounted on vehicles, but they can't be normally obtained by the player making them go unused. They can all be obtained through the console command "give [Weapon Name]".

A leftover from Jedi Outcast. It is fully functional and can be accessed through the Inventory.

Kyle Katarn's blaster pistol from Jedi Outcast. Kyle can be seen using it on the Byss level. It does the exact same thing as the DL-44 Heavy Blaster Pistol.

The rifle used by the Tusken Raiders. It is sightly buggy and has no first person viewmodel.

The staff used by the Tusken Raiders. It does no damage.

The scepter that Tavion uses to resurrect Ragnos. It's buggy, but it works. It is possible that the player would obtain it if [s]he turned to the dark side.

A portable version of the E-Web Blaster Turrets. It has no model.

This is the cannon from the Byss mission that is used to shoot down the TIE fighters. It's also a leftover from a similar cannon in Jedi Knight 2. 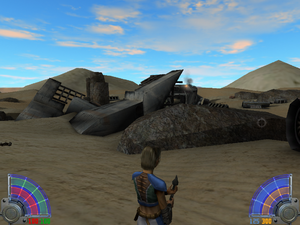 The Noghri's poision spray stick can be obtained. Unfortunately it just crashes the game when fired.

There is a leftover reference to the Jawas' ionization blaster in the files. Nothing remains of the weapon's coding.

These can all be accessed with the command "npc spawn vehicle [vehicle name]".

Z-95 Headhunter (z-95) Jaden's ship. It is very glitchy when it crashes into something.

TIE Bomber (tie-bomber) Like the others, it's very buggy.

TIE Bomber 2 (tie-bomber2) An alternate version of the TIE Bomber. It's pretty much the same thing.

Lambda Class Imperial Shuttle (lambdashuttle) Same as all the others.

Rideable Rancor (rancor_vehicle) A rideable version of the rancor. It is functional and the player can use their lightsaber and the blaster rifle on it.

If you cheat and get Mind Trick level 4, you can use this power to take control of NPCs. The only problem is that any weapons that aren't lightsabers fire very fast.

You can obtain Tavion's sword by typing in the command "saber sith_sword". It's buggy and has very high damage stats. It is possible that the player would get it along with the Scepter if [s]he turned to the dark side.

On the Tatooine spaceport level there is a locked door up some stairs. If you noclip behind it you will find 3 unused rooms including one with an unused Chewbacca NPC.

An obviously temporary texture. The name suggests it was an inventory icon for the ammo dispenser.

In the archive assets1.pk3 is data for unused NPCs. It is stored in "\ext_data\npcs\".

Data there include a dummied out 'test' NPC, a 'rocks' NPC (this may be used, but nobody would know it was an NPC without accessing the game's internal files), an interrogator droid ('interrogator'), 'seeker,' which spawns a floating mouse droid that fires DL-44 blasts at the player and player ally NPCs, different species of reborn cultists ('rebornchiss,' 'rebornrodian,' 'rebornweequay'), a dark side commando that dual wields DL-44s ('cultistcommando'), an Ugnaught ('ugnaught'), Mon Mothma ('monmothma'), Jan ('jan', left over from Jedi Outcast), Lando Calrissian ('lando'), a Tavion NPC using the old model ('tavion', also from Jedi Outcast), a Swamptrooper ('swamptrooper') and 'cultist_destroyer,' which uses the 'cultist_drain' model, and has odd behavior.

An NPC copy of the player (normally reserved for cutscenes) can be spawned in game. It switches to whichever weapon the player is using and will attack NPCs with their team set to "NEUTRAL" or "ENEMY." This is normally never seen during gameplay, though using noclip in the map 't2_trip' can let players skip the trigger that activates the ending cutscene and see the 'player' as a separate NPC.

Using the command 'playermodel luke' gives the player 200 force instead of 100. It's unclear whether this was a cut feature from when Luke was playable or an easter egg put in by the developers.

Setting the playermodel to 'rocks' negates fall damage. This is likely an unintentional result of the 'rocks' model's hitbox.

Editing the files to give protocol droids lightsabers will result in a behavior where if anything causes the droid to lose health, the lightsaber will ignite and the droid will walk towards whatever harmed it. Protocol droids have no attacks or attack animations and cannot swing the lightsabers. Jawas, if given lightsabers, will attempt to attack both the player and enemy NPCs.

It's unclear whether this is used at all, but the sound data for 'rocks' points to the jawa sound files.

This game features the exact same anti-piracy measures as its predecessor.