The roots of Rhythm Tengoku trace all the way back to a drumming simulation tech demo, where a few years later, it would be conceptualised into Rhythm Tengoku taking inspiration from Brain Age. Prerelease material was rather minimal, despite a lot of content not making it to the final cut.

Despite it being released pretty late into the handheld's lifespan, it was big enough of a hit to spawn a sequel for the then-recent Nintendo DS.

In the 1101 interview, Osawa shared the names for some rhythm games that were scrapped from the final game.

In the very same interview, it's stated that the release of Brain Age: Train Your Brain in Minutes a Day! had some influence on how the Rhythm Games would be presented to the player. Much like in Brain Age, the rhythm games would have been separated in categories, each one specializing in different aspects of rhythm; but the ultimate decision was to have the games assorted, with the reasoning being that sorting the games like that could have made the progression much more monotonous.

Both Katsuya Yamano (game's supervisor) and Isamu Sakamoto (game's producer) have stated the name リズムアイキュー (Rhythm IQ; also stylized as Ｒ♂ＩＱ) was a working title for the game. This can be seen in the final game's Debug Menu, and some unused menu graphics. Later games continue to mention it within the game's files including a possible reference in Ringside. 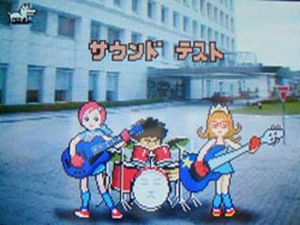 The thumbnail for the video in its original source shows a clearer picture.

Sometime in 2002, (two years before Tsunku♂ pitched the project of a rhythm-training game to Nintendo), chief programmer Kasuyoshi Osawa had created a prototype for the GBA where you could play a drum kit, with each button on the console being designated to a different drum (save for the Start and Select buttons, which seem to be used to start and stop the playback of a backing track, respectively.)

The Drum Lessons and Concert Hall modes are directly derived from this original concept (as well as the unused Raccoon & Monkey rhythm game!).

In 2004, Tsunku♂ pitched the project of the game to Nintendo, and the staff went to Tokyo to take dance lessons to improve their sense of rhythm under Tsunku♂'s recommendation, dancing to the music of Remixes 1, 2, and 4.