Rhythm Heaven Fever is the third entry of the Rhythm Heaven series. It's also the most infamous, as it started the memetic "Piki piki piki desu ka?" (or "Wubba dubba dubba 'zat true?", if you prefer).

Two drum tracks meant for the Rhythm Test at the beginning of the game. These tracks are actually remade versions of the ones previously heard in Rhythm Tengoku's Rhythm Test, meaning that these would've served the same purpose.

Three versions of the standard "Let's Practice" theme, all leftover from Rhythm Heaven. This game uses unique practice music for all stages that closely resembles the stage's song, and even when it doesn't (like with the extra games), a new arrangement of the "Let's Practice" theme is used instead. BGM_PRACTICE IS used as the practice theme for the unused Endless Game "Torch Relay", however.

Faces used in the animation "navigator_a_face_look." The face depicts Marshal/Matt and Miss Ribbon being unsatisfied.

A pair of seagulls, occupying Sprite 187 in golf_monkey.brcad. The only difference from the final seagulls are that these ones lack their strings. The final seagulls would be stored in golf_bg.brcad.

Numbers that are present in the texture atlas for most Rhythm Games. They were used as a frame counter for animations, and can still be seen on many of them. They'll usually have there opacities set to 0, so editing them will be required in order to see them. 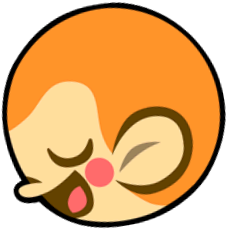 The monkey facing his side whilst smiling, found at Sprite 5 in tambourine.brcad.

A monkey-shaped shadow that would be used in place of the generic circle shadow.

The player's left hand. The used left hand has more of its arm visible.

Two sprites of the monkey's leg.

A chair seat meant for the spinning animation, as it is found next to the other spinning chair seats in the texture atlas.

When compared to the final body part, the unused one has a shorter arm.

A group shot of everyone, including the bassist from Rhythm Tengoku's "Drum Girls LIVE!" mode. Since the assistant herself holds a bass guitar, including two bassists would be kind of redundant, so the Drum Girls bassist was removed.

A pair of red eyes belonging to the Muscle Doll. The Cast Credits shows the Muscle Doll's eyes glowing red along with his beat animation, so perhaps these had a similar purpose. This graphic only appears in the files for the original game and the Remix 10 variant.

In Ringside, the reporter has to stand on her toes in order to get the microphone close enough to the wrestler for his response. The graphic for this however goes completely unseen, both due to the camera being too zoomed in to see, and the photographers covering most of the graphic. 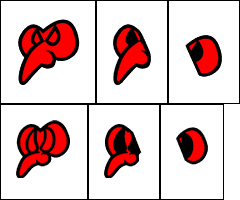 A mask reminiscent of the ghosts from the Rhythm Tengoku version of Samurai Slice, likely to be worn by the ghosts in the remix. It's cut diagonally to the left unlike the regular ghosts, possibly an indication that the ghost that wore it would drop it after the Samurai sliced it, finishing it off with a second slice (pressing the A button twice). 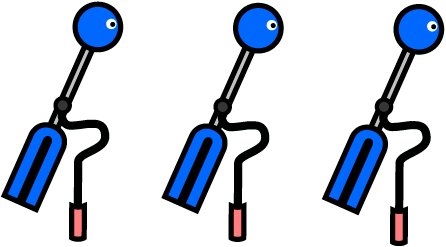 This early image of The Donkers is bizarrely found only in the texture atlas for the Remix 10 version. They are noticeably bluer than their final versions. 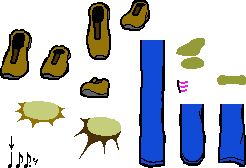 Sprites that don't resemble the Wii game's art style, but rather the DS installment, exist in the main sprite sheet for the tappers. It's safe to assume these were just placeholder graphics; possibly recycled assets from the Rhythm Game that originally got planned for the DS installment, and later used as base for the artist to draw the new graphics. 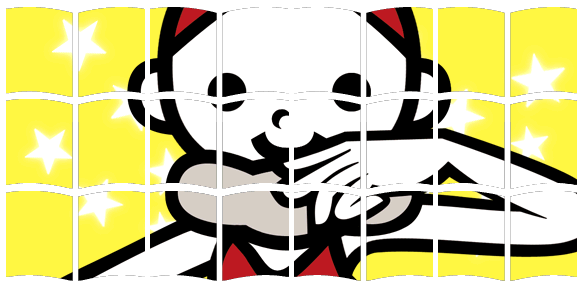 Unused book image of the Tap Trial 2 girl from Rhythm Tengoku. The player's part of image (bottom-right) can still be seen when opening the books too early.

A "1", presumably for a "Hit 1" cue. This possibly went unused because asking players to "Hit 1" in a game where you spend a good chunk of time doing just that would be silly, now wouldn't it?

An entire word set, smaller than the used ones. 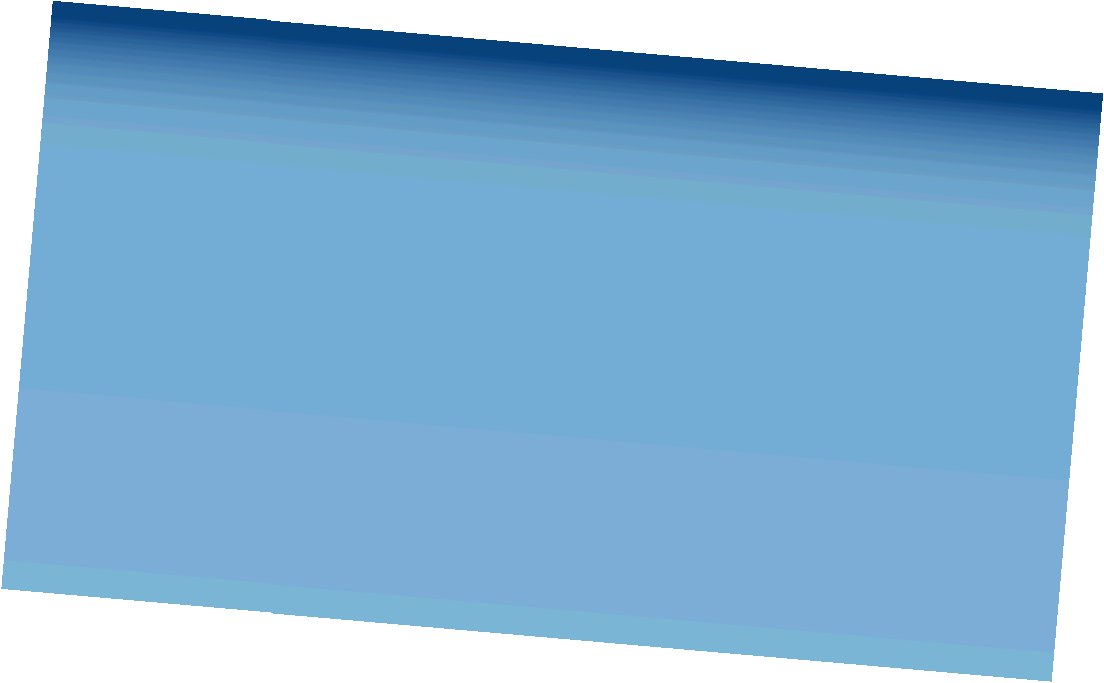 This background occupies sprite 74 in karateman.brcad, while the actual background is stored in karate_bg_00.brcad. Aside from the whole thing being rotated 5 degrees, no noticeable difference between this BG and the used BG are present, aside from using a slightly different, less smooth gradient.

A file named layout_prologue_manzai_ver0.szs exists in the layout folder for Rhythm Heaven Fever. Prologue files are where Rhythm Games store their title cards, suggesting that Manzai might've been a normal Rhythm Game.

A crown. Likely to be worn by the chameleon, as it is grouped next to its sprites.

An early version of the toy car, with a more sleek design than the final one. 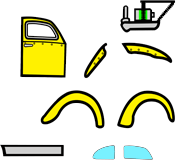 The car is actually split into parts, unlike the final, which shows us that the car had an engine. It may have also had windows, although those aren't seen on either car.

The person driving the car wears a hat, which was removed in the final version. 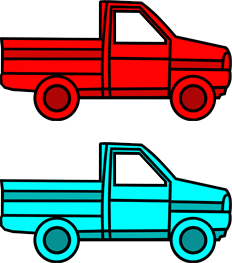 A red and cyan pickup truck, likely used as a visual aid to know the correct time to launch the car.

A plain looking tile, possibly an early version of the road tile. 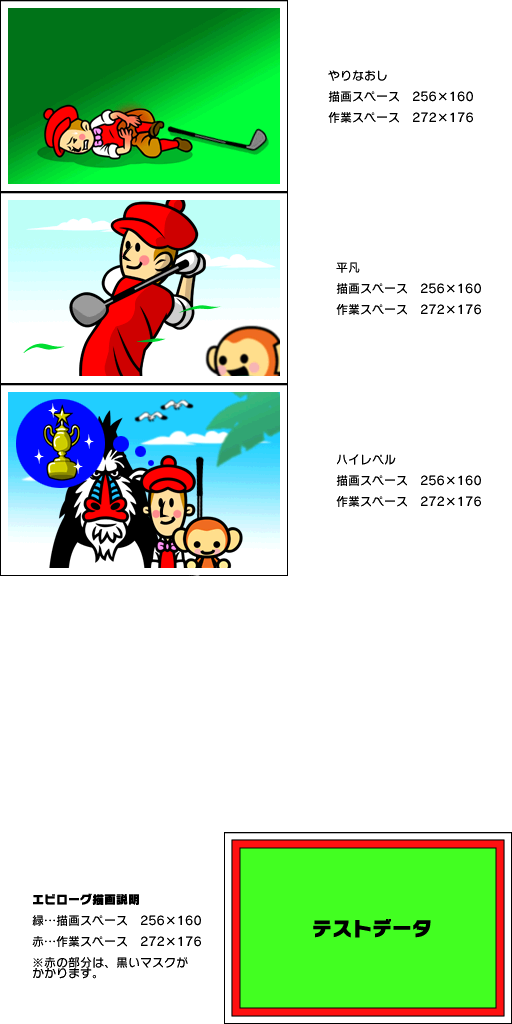 A low-res logo. Code to display it still exists, revealing it would function the same way as a similar logo did in the previous installment.

A debug display similar to it's predecessor, featuring a points counter and 32-beat bar used to measure accuracy and determine your rating at the end of a Rhythm Game, the word "Tutorial" followed by a red cross suggesting that tutorials could be turned off, red, blue and yellow bars that indicated over the beat bar if your input were too early, spot on or too late, - and + symbols from the Wii Remote and a incomplete Japanese sentence that reads "-to the menu".

A block from Super Mario Bros. Found in layout_fader.szs.

See-Saw has an unused version of the game where the game is controlled by two players, with player one controlling Saw (the one on the right, like the normal game), and player two controls See (the one on the left). This version of the game notably doesn't follow either player when they do a high jump, likely because having the camera move with both players would be nauseating.

Additionally, there are two unused miss sounds for the second player that get partially covered up by the normal landing sound. These sounds were not re-recorded for the English version, so they still use the Japanese voice. 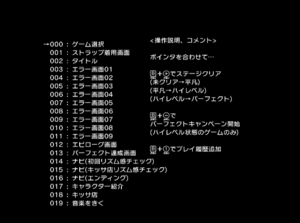 First page of the debug menu.

The following Gecko codes will trigger the debug menu in place of the title screen:

Accessible via the debug menu is an entirely unused game called Seika Relay (or Torch Relay, as the folder containing the graphics for the game is named). Judging from its position in the debug menu, this game was intended to be an Endless Game. The game starts with a count-in, followed by a torch being thrown from offscreen. The player then must catch the torch by pressing A + B, which causes the onion to catch it. Not catching it causes the torch to permanently stay on screen, and catching it too late causes an onion to appear above the vegetables, at the center of the screen. The unused version of the "Let's Practice" theme starts playing, the onion turns towards the lettuce, and the player must press A + B again, causing the lettuce to suddenly become an onion. The onion then turns towards the next vegetable, even though the torch is still with the first vegetable, and the camera starts to infinitely pan right, eventually looping back to the first vegetable, still with the torch in its hand. Inputting anything else won't affect anything on screen, and the game continues infinitely.

Attempting to skip the practice will cause a short drum beat to play, before immediately softlocking the game. Similarly, attempting to pause and quit the game will softlock it. If the camera is panning when you do this, the vegetables will stop spawning after a while. Most of this game has been removed in international versions, with all that remains being the unused "Let's Practice" music.

The debug menu contains 3 standalone versions of each of the Rhythm Games featured in the Endless Remix. It is likely that these Rhythm Games were once used for general testing of cues and such, mainly due to their simplistic nature. These games function similarly to the Endless Games, and use the same score counter seen in them. All of them feature a simplistic drumming track for the music, and will continue indefinitely until the player misses a cue, at which point it will display the game over graphic also found in the Endless Games. During this, the music will still continue to play until the player presses A, stopping the music and softlocking the game.

The first of these is a test for Basket. The game starts with the girl dribbling the ball, and eventually passing it to the player. This action repeats a few times, and then the girl starts rapid-firing passes to the player. After this, the camera will start to zoom in on the Basketball net, something that does not happen in the Endless Remix, and repeat the same cues as before. After the cues repeat, the camera will zoom out from the Basketball net, returning to its default position, and the game will repeat until a cue is missed.

The second of these is a test for Chameleon. This game is very simplistic, as it mainly alternates between the A + B (when the fly is far away) and A (when the fly is up close) cues with no variation what so ever. Interestingly, when the game is softlocked, you can still control the chameleon.

The last of these is a test for Frog Jump. Like with Chameleon, the game is very simplistic, only requiring you to hold A after the frog gives you its two-tick cue, and release it a beat later.