When the GBA version of Rhythm Tengoku was popular with the staff of Sega, they approached Nintendo for an offer to make a port for arcade systems. It's still the very same rhythm game as you know it, but there's some new additions such as a Multiplayer mode, and an Extra Stage consisting of "high speed, no less!" rhythm games based on Stage 1's games, along with some visual changes for each of them.

It's also notable for being one of the very few games developed by both Nintendo and Sega.

An unfilled heart for the Flow Meter that goes unused, as there's no color being filled in it.

Unused English text prompting you to press the A button, and a smaller version of the A button intended for the tutorial. These are never used in-game. 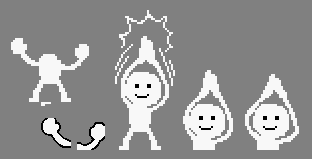 A possible placeholder sprite of one of the Trio's members.

Red text to indicate that the player is marked as "You" in English.

Ears meant for The Clappy Trio.

An exclamation mark which is in italics.

A hat different from the one used in game, this one being a top hat.

A four which goes unused because we never get to see four on the floor.

An unused wig that The Clappy Trio was meant to wear.

Unused sprites of a duck and a crab, which are also present in the original GBA version.

Unused sprites of a speech bubble and a note.

A Tempo Up! squadmate with no helmet. Their hair mostly goes unseen in-game.

Japanese text to mark the player as "You", but without its metallic box.

Gray text to indicate that the player is marked as "You" in English, similar to The Clappy Trio.

These numbers are most likely a leftover from the original game's Quiz SP.

There are unused portions of Remix 1's music in the sound files, but they go unused here apart from the starting portion, as some were later repurposed for Remix 7.

Unused portions of Remix 2's music are also in the sound files.

Remix 4 also has unused portions of its music in the sound files too.

Just like the GBA Remixes 1, 2, and 4 in the GBA version, there are unused portions of Remix 1 Tempo Up's music that are never used in-game.