In 2016, a kiosk demo version of Rhythm Tengoku was dumped and released by Demoban. The player is able to play the Rhythm Test, as well as three rhythm games from the first set of the retail game: Karate Man, Rhythm Tweezers, and The Clappy Trio.

It supposedly was playable in stores about a month before the game's release, and development was close to being finished, so there's not much to see in terms of interesting differences between this and the final game. It's all pretty minor stuff.

For starters, the demo lacks the Health and Safety screen usually seen when booting up the game.

The title screen in the demo adds a subtitle reading "体験版" (roughfully translating to Trial Version), as well as the first and certainly not last instance of "おねだん ¥３,８００", denoting the price of the game.

Once again, a mini-logo, and the aforementioned message was added to the top-right of the screen to inform players that Rhythm Tengoku costs ¥3800.

When starting the game, the demo goes directly to the minigame select screen, while the full game first takes the player to a separate menu, containing other features that are normally inaccessible in the demo. One of these options is the Rhythm Test, which in the demo was moved to the minigame selection screen. The main menu can be accessed through the debug menu, but the audio quality is different than in the final game.

In the Options menu, the Stereo/Mono sound setting options are non-functional, so the demo is locked to Mono regardless of which option is chosen.

The demo version, once again, reminds the player of the game's price, and the text on the bottom-left reads "おためし: あそんでみてネ！" ("Trial: Take a look!") in the demo, as opposed to "ステージ １:ようこそ！" ("Stage 1: Welcome!"). In the demo, only three games can be selected, in addition to the Rhythm Test. Pressing B has no effect in the demo, whereas in the retail version it takes you back to the previous menu.

Generally speaking, all games accessible in the demo were modified in some way to include a message advertising the upcoming release of the game. Another difference that applies to all games is that the option to pause the game using Start has been disabled.

The sound effect for the note appearing on-screen is the same sound used for the balls bouncing in the Bouncy Road rhythm game in the full game. This seems to be a bug, as loading the Rhythm Test through other methods, such as the debug menu, uses the intended (?) sound.

This game's sequel also has this text, although it wasn't meant to be playable in this Trial Version.

The demo has the text "リズム天国は、おねだん ３,８００円です。" scrolling along the bottom of the screen.

In the demo, the text on the sign changes to "リズム天国 おねだん ¥３,８００" by the end of the game.

This game's sequel, The Snappy Trio, doesn't feature any changes as it does not share the same sign graphic as the game it was based on, and it was not intended to be playable in this Trial Version.

However, this is a mockup of how it would look if The Snappy Trio had this feature.

In this unused version of Marching Orders, the text "リズム天国 おねだん ¥３,８００" moves at the end, when the marchers are off camera.

Marching Orders 2's textures are corrupted because it wasn't meant to be included in the demo.

This unused version of Spaceball has the text "リズム天国 おねだん ¥３,８００" to pop out at the last zoom.

Its sequel, Spaceball 2, does not have this.

"Thanks For Playing!" Screen

This unused "Thanks For Playing!" screen can be accessed in the demo's Debug Menu, but it is unused. This unused screen says when the full game released, so it was a reminder to buy the game on August 3rd for 3,800 yen. 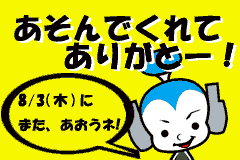 When opening the ROM as raw audio on Audacity, it's revealed that every sound effect from the retail version is still in there, but only some of the ones from the mentioned playable games above are used.