Rhythm Tengoku is what happens when popular Japanese music producer/singer Tsunku♂ partners up with the team behind WarioWare - a weird but awesome rhythm game filled with all sorts of wacky characters (and lots of monkeys), which further resulted in the Rhythm Heaven series.

While exclusive to Japan, it actually requires little to no knowledge of Japanese to pick up and play, making it a good (and popular) import title, though a fan translation is available. It's also the last first-party GBA game, coming two years after the Nintendo DS' launch.

Note: all offsets listed here are pertinent to the revision 0 (Rev. 0) rom unless specified otherwise. If you are playing a revision 1 (Rev. 1) copy, offsets mentioned may not be accurate. 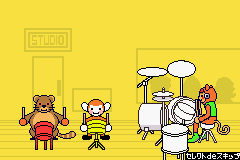 A screenshot from the Rhythm Game. Tanooki and Monkey are on the left, the monkey-like drummer is on the right.

An unused Rhythm Game where you control a monkey-like drummer, who's tasked to copy the patterns that are played by Monkey and Tanooki. The game controls the same as the Drum Lessons from the final game, but only A, Right, and Down are used on the patterns. The player is given three attempts at completion for each pattern. Upon completing the game, the player is taken to the Rhythm Test result screen. Upon losing the game, however, the player is taken to the Ratings Screen. It doesn't go much farther than that, though, as the game crashes shortly after.

Tanooki & Monkey also has text to go along with it!

If the player wins:

If the player fails a pattern:

If the player loses:

An unused Rhythm Test that can be found in the game's Debug Menu. The game is very similar to the Endless Game Mr. Upbeat (and uses the same tileset), and the player must press A in time with the needle passing the bird at the top of the screen. The counter at the top right then starts counting down from 30, and the player continues to press A until the counter runs out. Once the counter reaches 0, the player is taken to the Rhythm Test results screen and is shown their score, which will be different based on how many successful hits the player got in the game.

Metronome was likely an early incarnation of Mr. Upbeat, as the two games play almost identically, with the only major gameplay difference being that Mr. Upbeat is endless. Interestingly, however, Metronome has a different set of text from Mr. Upbeat:

The minigame also uses a slight variation of the beeping sounds that play during the Rhythm Test. The sounds are mostly the same, but the 3 beeps before the end, as well as the ending chime, are a slightly different pitch. The bird sound effect is unique to this unused Rhythm Test, however.

There are also multiple unused sprites found in Metronome's spritesheet. The first appears to be a scale, with the left side saying "slow" and the right saying "fast". This was likely meant for an accuracy meter, with each bar lighting up to measure how on-beat the player's rhythm was. The other two are pictures of a person's face, with Japanese text written beside him. The first picture says "fast", and the second picture says "slow." Strangely, there also exists copies of the face, but flipped horizontally.

These are background graphics that go unused in the first Karate Man rhythm game. They can be activated if 0x089CFF05 is changed to 0x01 in a memory viewer.

There are ten unused sound effects of the Sarge with a different voice.

There are unused pointing sprites for Marching Orders, as well as the variant of the minigame that appears in Remix 7 and 8.

This sprite is visible in-game, but is mostly obscured by the helmet sprite. For whatever reason, the entire head is made up of more than one sprite.

A flowerpot with a face, an apple, and a star all go unused. The apple was most likely replaced with the rice ball, and the star is a graphical replacement for the baseball since it can be activated by changing the baseball GFX.

There are two unused variants of Spaceball present in the game's file. Both variants use the second minigame selection track.

Located on page 8 of the Debug Menu, labeled as ダンスレッスン1 (Dance Lesson 1), is an early version of Remix 1! This version of Remix 1 is a minute longer than the final, using unused portions of Remix 1's music (with a few parts of it being reused in Remix 7). The most interesting thing to note is that Rhythm Tweezers is absent in this version and has been replaced by Tap Trial! This implies that it was either originally in Stage 1 but was then moved to Stage 5 later in development.

It's named "Dance Lesson 1" after the dance lessons the development team had to take during the game's development, as recommended by Tsunku♂.

Sprite of the girl on top of the tower without her red jacket or hands. While this sprite is in the final game, the jacket and railing of the tower cover up most of her torso. Her legs are completely obscured in-game

The graphics function that controls the virus palettes has some unused values that change the viruses into other visible palettes.

There also exists unused hit counters, most of which turn the viruses invincible, but one makes the virus require 4 hits to be cleared.

Unused English text is present in this game's tileset. The text can spell out any number of words, including "down", "punch", and "right". Japanese words are displayed during the tutorial in-game, and they mean essentially the same thing as these unused English text. For example, "パンチ" means "punch."

A crab and a duck, which both go unused. These might have been a reference to the Play-Yan for the Game Boy Micro.

An unused sound for Play-Yan screaming. This could have been used when Play-Yan fell off of the stairs after the steps disappeared. It doesn't appear in its sequel either, suggesting it was cut before either one was finished.

An unused arrow graphic. It is not known what this would have been used for.

Located within Toss Boys' soundbank are some unused SFX. With new SFX, comes new combos. These include:

There are two unused sprites in Fireworks,

The string is slightly different on this bomb, the final version uses a more curvy string design.

This is the last frame of the explosion, for some reason this was never added in, probably by mistake.

There are a few unused sprites meant to replace the giraffe for the different versions of Tap Trial, but only the original giraffe ever appears in the final game. Remix 7 would've utilized the dragon, and Tap Trial 2 might have, at one point, used the camel.

This unused variant of Rap Women can be found on Page 6 of the Debug Menu, labeled as ラップウィメン(by KAZU), with the other option, labelled as "by YONE", being the version used in-game. This version is likely named after Kazuyoshi Osawa, the Chief Director of Rhythm Tengoku; similarly to how the used "YONE" version is named after Masami Yone, who was the game's Sound Director.

The audio cues in this version are placed differently than that of the used version, most of which being on offbeats. It was likely changed to make the song flow better with the lines from the characters, however this has yet to be proven true.

Early versions of the OK and Try Again graphics.

This directly translates to "Norikan Check", with "Norikan" being the Japanese term for "Flow". This appears over the white oval with text that serves as the caption on the rating screen after completing certain unused games in the debug menu.

Sprites of a cowbell are present within the Rhythm Test's graphics, it might have once been intended to be used for a timer's ending tone.

Graphics from an earlier version of the Game Select screen. "Rhythm IQ" was a working title for this game.

An unused graphic of a dog found in the Café's tileset. It could be an early version of the Barista, however the Barista was never shown in the final game.

Hidden in the background layer for this game is an early version of the "controller".

Some text that isn't used in-game. The first string uses similar phrasing to the results screen from the unused Rhythm Test, but it doesn't use Kanji characters, unlike the other text. There would have been an eighth Drum Lesson experiment, and Power Calligraphy doesn't have a sequel version in the final game, so these are unused. The second text string can be seen in the Debug Menu, and the third text string can be seen in the unused Gameplay History, also featured in the Debug Menu.

In the Debug Menu, there is an unused version of Drum Girls, where they play the song Bunny Hop. This version is the only time that a Drum Girls minigame is seen to use this sprite, which appears at the bottom of the screen during small segments of the song without any music:

It is also the only known minigame in Rhythm Tengoku to utilize an earlier version of the Ratings Screen without crashing the game. There are other minigames in the Debug Menu that seem to try to use this same screen, but they result in a crash.