Game storyline: When some creature escapes into space with Princess Peach, Mario gives chase, exploring bizarre planets all across the galaxy.

How to progress through the game: Players run, jump and battle enemies as they explore all the planets in the galaxy. Since this game makes full use of all the features of the Wii Remote, players have to do all kinds of things to succeed: pressing buttons, swinging the Wii Remote and the Nunchuk, and even pointing at and dragging things with the pointer.

Special powers/weapons/moves/features: Since he’s in space, Mario can perform mind- bending jumps unlike anything he’s done before. He’ll also have a wealth of new moves that are all based around tilting, pointing and shaking the Wii Remote. 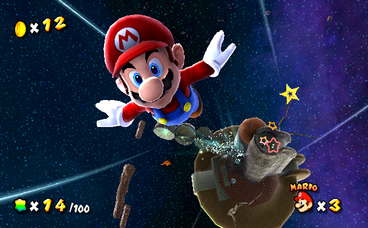 The same demo appears to also have been used at Nintendo World 2006, but with the language set to Japanese.

The "Wii Preview" event took place from 14 September in multiple places around the world[1]:


note: the "Mario GXX" labels are from the Photoshop "Slices Group Name" fields in the exif data from some JPG copies of the screenshots, or in some cases from the actual JPG's/BMP's filename

photos of a video shown on the stage of the London version of the event:
https://www.gamekyo.com/news17445_la-wii-pour-le-8-decembre-en-europe.html

Shown during the conference.

Many videoclips of the E3 Demo survived on YouTube:

Not sure if this is associated with event.

Some preliminary US box art and an updated logo were released.[42][43]

Some new artwork was released:

29 screens. Unknown if these are associated with an event. [59]

Retrieved from "https://tcrf.net/index.php?title=Prerelease:Super_Mario_Galaxy&oldid=1139215"
Categories:
Cleanup > To do
Games > Games by content > Prereleases