This page details prerelease information and/or media for The Legend of Zelda.

It was my first video game-related job. At the time it was titled Death Mountain. I wrote a story that was inspired by conflicts of hegemony that happened in medieval Europe and created the legend of the Triforce. A system where you collect the scattered pieces of an item is nothing special nowadays, but back then it was pretty novel. I was quite proud of that.

In an interview with Electronic Gaming Monthly that published in EGM Issue #198, Koji Kondo explains that the original title theme was supposed to be a cover of "Bolero". However, he was informed at the last minute that the song was not yet in the public domain, so he had to create his own theme:

Electronic Gaming Monthly: This is an open-ended question, but do you have any stories or funny anecdotes that you remember from the early days, maybe the early Famicom days, about your music or the games?

Koji Kondo: Yes, as I recall, in the very first The Legend of Zelda, in the very opening title screen, we used to use the classical music of "Bolero," because that tempo was perfectly matched with the speed of the opening screen rolling. But I remember it was just before, when we really had to complete the final ROM for reproduction, they told me that unfortunately the copyright of that music hadn't expired yet, so I had to compose a completely new piece of music that [sic] night. I recall that I did it within one day. You know, "da-da-da-da" — that was done in just in one night.

Electronic Gaming Monthly: You came up with that and recorded it in just one day?

Koji Kondo: Yeah, but of course, we already had the ground level music [overworld theme] figured out, so what I did was just an arrangement to perfectly match with the opening scroll.

As an additional volume included with the The Legend of Zelda: Spirit Tracks Iwata Asks interview, the staff unveil the history of prior handheld titles in the Zelda series.

Below is an early development document by Shigeru Miyamoto, which shows where various sprites would be stored in the CHR data. This would later appear in the Hyrule Historia. 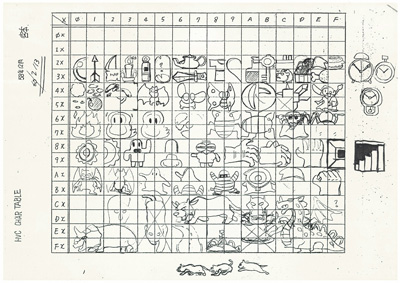 According to the Iwata Asks interview, the game was originally meant to have only one quest (some lines removed for clarity):

Nakago: And I've got something even more interesting today. This is the first dungeon map ever created for The Legend of Zelda. 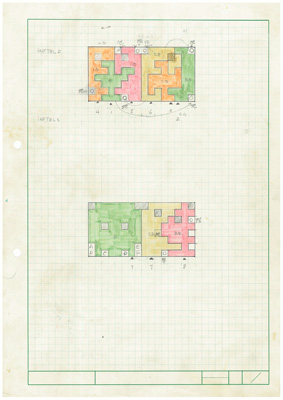 Tezuka: Basically, we were going to make lots of dungeons using one square per room, and lay them out like a jigsaw puzzle.

Iwata: In order to fit in as many dungeons as possible given the limited memory, you were making them like you were doing a puzzle.

Nakago: Right. Tezuka-san said, "I did it!" and brought this to me. I created the data exactly in line with it, but then Tezuka-san made a mistake and only used half of the data.

I said, "Tezuka-san, there's only half here. Where did the other half go?" and he was like, "What?! Oops, I messed up..." But Miyamoto-san said it was fine just like that.

Nakago: So, using the half of the memory that was left over, we decided to create the Second Quest.

Iwata: Huh? Just wait a second. If Tezuka-san hadn't messed up, there'd have been no Second Quest?

Nakago: [...]And this is the original for the Second Quest. 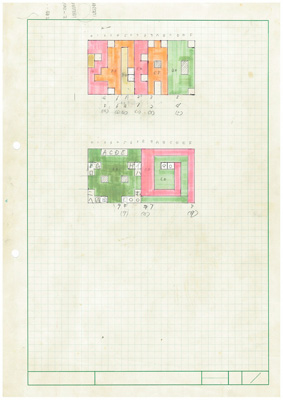 Iwata: So this is the Second Quest resulting from Tezuka-san's mistake...

Iwata: Was it Miyamoto-san who suggested turning this into a second quest?

Nakago: Yeah, it was.

(Source: Iwata Asks: The Untold Story of the Second Quest)

The February 1986 issue of Family Computer Magazine (aka Famimaga) included a preview of the game. This issue had a focus on items.

Several bushes were cleared out of this section of the overworld, removing a chokepoint that could potentially cause problems for beginning players.

A closeup crop of this screenshot (mirrored in the magazine) shows the detail of Link's sprite. He has extra pixels of hair in the back, giving the appearance of a mullet (something noticeably missing in other screenshots). The sword sprite is also placed one pixel higher.

The stepladder looks completely different, appearing to be a simple square with a checkerboard pattern. It may be a placeholder, or a different kind of object entirely, though the magazine still refers to it as a "ladder".

The magical rod is red instead of blue.

The March 1986 issue of Famimaga followed up with another preview of the game; this one with a focus on enemies. The build shown is newer than the one in the previous issue, but still not quite final.

These things seem to have been finalized between the build shown in the last issue and this one.

The game's font is now nearly identical to the final FDS version, with the only difference being that the I has serifs.

Two extra columns of bushes were added to the right side of this screen.

A blue heart is shown in the key counter, presumably due to the magical key being obtained. The final game uses an "A" (for "Almighty") instead.

An extra bush was added near the left entrance of this screen. (One of them can be burned to reveal a secret entrance in the final game.)

This entrance to "LEVEL-1" is actually the Moon dungeon that was shown in the last issue. If you look closely, you can see the distinct shape of the dungeon's map which was inked out. The finalized dungeon naming scheme was implemented, however, the Moon dungeon is actually Level 2 in the final game.

Additionally, the pixels between the floor tiles are red in the magazine screenshot.

The Stalfos is much simpler, with a less elaborate design for its face and its two swords. It also uses a blue palette, as opposed to a red one, which is even reflected in its promotional artwork. Interestingly, the Stalfos seen in the "ZEL-B" prototype, while essentially finalized, features a different raised foot, whereas the final sprite coincidentally looks more like the early one seen here.

The Wallmaster has a some rather sloppy extra pixels which were removed in the final game. Its spots (boils?) are also more numerous, more grouped together, and contain dark blue ones as opposed to just white ones. Interestingly, the ZEL-B prototype features what is essentially the final sprite, minus the spots. This would either imply that the devs were considering removing the spots, or that the ZEL-B sprite was just in the middle of being reworked.

The Keese is slightly thinner, has no legs, and appears to have smaller eyes.

The Rope is quite noticeably different. Namely, it looks much more like a realistic cobra, with a complex pattern on its hood, no gaping maw, and a smooth underbelly instead of a striped one. It is also assigned a blue palette instead of a red one, which is once again reflected in its promotional artwork.

Gleeok's Head originally had a completely different design, which is odd since the regular Gleeok shown in this magazine uses its final design. Here, the head is much rounder, and looks more like some sort of ogre than a dragon. Moreover, its main two colors are swapped, with the head being orange and the fire red, instead of it being the other way around.

The Iron Knuckle's shield was originally plainer and wider, its belt buckle is less visible, its sword is thinner, and its shoulder pad red instead of white.

Pols Voice originally lacked whiskers, which is interesting as its promotional artwork actually does have them. This could then mean that the sprite used here is from an earlier build, which predates the artwork, or that the devs liked the artwork's interpretation of this enemy and then added the whiskers later. Also worth noting is how Pols Voice has brown eyes here, but in the ZEL-B prototype they are assigned Link's tunic color, a trick which in the final game was assigned to its whiskers, the eyes being reverted to brown.

The Boulder sprite was originally quite sloppier, lacking white highlights and looking more like a giant walnut. This sprite actually managed to stick around for quite a bit, with it still being around by the time of the ZEL-B prototype.

The Ghini originally had two legs, as well as a meaner expression, making it look like a ghastly starfish. This sprite is also still present in the ZEL-B prototype, and this early design was also used for this enemy's artwork in the Japanese strategy guide.

Interestingly, the magazine uses not one, but two iterations of the Rope enemy, which all but confirms that not all of the sprites used here come from the same build. This sprite is essentially identical to final, with only the face's perspective being different, and with the underbelly being less jagged.

Early footage of the game appeared in a 12 minute long promotional video for the Famicom Disk System.

The dungeon blocks from the Famimaga screenshots are shown in the video, although other footage shows a design much closer to the final version but with different shading.

Aquamentus' sprite is noticably different, with a less detailed eye. Most of the white and dark green colors were reversed on the final sprite. In addition, the room he's faced in is using the Levels 4 and 6 palette as opposed to the final's Level 1 palette.

Interestingly, this image also appears on page 41 of the NES version's manual, but with the Japanese text blacked out. 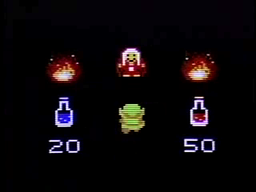