The Disk System was an add-on for the Famicom that utilized distinctive-looking floppy disks (primarily yellow, though sometimes blue) as its media. A number of its games were later ported to the Famicom and/or NES cartridge format.

The Twin Famicom, meanwhile, combined the Famicom and FDS into a single unit that supported both formats as well as the Famicom's other peripherals.

Probably the most recognizable element, partly through its cameos in Paper Mario: The Thousand-Year Door and Tetris DS, is the "PLEASE SET DISK CARD" screen: While waiting for the player to insert a disk, Mario and Luigi (using slightly-altered versions of their Mario Bros. sprites) change the color scheme and chase each other around. 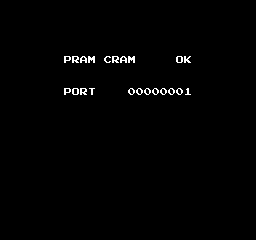 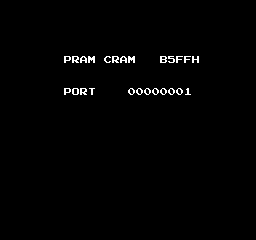 Hold Start + Select during the boot screen and press Reset. If no problems are detected, it will display "PRAM CRAM OK". If an error occurs, the address of the first memory cell where the error was detected will be displayed.

Use the RAM Check code above, but before the text appears on-screen release Start + Select then hold Right + A to see the programmer credit of Takao Sawano. This works on both the standalone unit and the Twin Famicom, the latter of which otherwise makes no reference to Nintendo.

The original version of the standalone BIOS only includes the programmer credit. The newer revision features some space-saving code optimizations (including the removal of the code responsible for adding a drop shadow to the font, seen below) that allowed Sawano to add both the name of the ASIC and the team responsible for FDS development, Nintendo R&D2.

Three versions of the FDS BIOS exist. The ones used on the standalone unit display the Nintendo logo, whereas the Twin Famicom uses the "FAMICOM" logo also used on the physical console.

The later revision of the standalone BIOS removed the heavy shading on the bottom edges of the Nintendo logo and the drop shadow behind the alphanumeric character set.