This page details one or more prototype versions of Ape Escape.

In the 1990s, Pizza Hut gave away discs that contained demo versions of games, one of which was Ape Escape.

The menu font is significantly different, the menu options are red and don't blend in very well with the background, and the trademark symbol is less stylized.

The demo's DualShock controller screen is very similar to the European version and likewise recommends the DualShock instead of saying it's required.

The area where Specter puts on his helmet in the intro cutscene is a wooden area instead of a colorful, circus-like area.

The pause menu and status screen features a thicker font in the demo. "Stage" is in all caps in the demo.

The demo has leading zeros when displaying the totals.

After completing Primordial Ooze in the demo, you're presented with the following two screens. 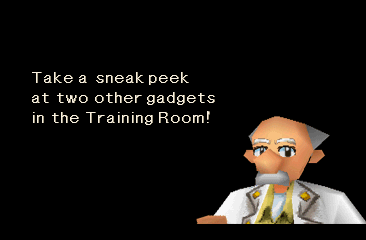 This screen refers to the two gadgets in the training room, the Sky Flyer and the RC Car. After completing their training, you gain permanent access to the gadgets. 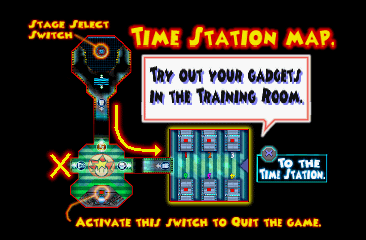 After the previous screen, you're presented with a map of the Time Station barring the minigame room, which is closed off. This map contains the unique Warp Room not present in the final.

Primordial Ooze is called Wetlands in the demo. The demo uses a more stylized font for the menu options.

The font is different, and the demo is missing the monkey and Specter Coin counters.

Both fonts on this screen are different, and the demo says "STAGE CLEAR!" instead of "STAGE CLEARED!" in a larger font.

The warp switch is in a separate, darker room called the Warp Room, unique to the demo. It features a machine with generators and electricity moving in a wavy pattern, indicating that this is all powering the warp switch. It's north of the main area, and you spawn here upon leaving a level.

This room may have been removed due to its size and the fact that the stage select is accessed simply through a switch. 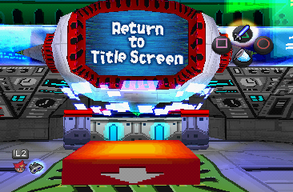 The memory card monitor has been replaced with a monitor that takes you back to the title screen.

In the demo, this mailbox is located in its exclusive Warp Room, hence the mention about the passageway in the back. The demo incorrectly mentions that the warp switch will send you to stage 2; it actually sends you to the stage select.

The text is quite different from the final, since there's no saving or loading available.

This mailbox gives you more tips in the demo.

This text box tells you how to jump twice in both versions, however, the final rewords the second to last sentence and forgets to omit a period after "R1".

The final split these hints into two text boxes. The first line in the demo overflows at "cookies".

The demo doesn't specify which stick to push in to dive.

Once again, the demo doesn't specify which stick you have to push in to dive.

The demo doesn't mention that you drown when running out of oxygen in this mailbox.

Mailbox (By the log bridging land and the water)

The final is inconsistent one here, showing the stick icon at the end of the first sentence. Minor changes otherwise.

The demo oddly mentions throwing the Time Net, which is something you can't do.

The final understandably changed the wording so it doesn't sound like you obtain a camera.

The different camera modes are capitalized in the final.

The last word was moved into a separate line to prevent overflowing the text box.

Mailbox (By monkey in corner cliff)

The final makes it more clear what you can do if you're on a tree.

The final improves the grammar for the RC Car's description and uses more of the text box's vertical space.