The September 3rd, 1999 prototype of Crash Team Racing is a review version of the game dated three weeks before the final NTSC-U release version. The original source and the release date are unknown, as it was overlooked until 2012, although it had been available online for some years before.

There are more unused voice clips of Aku Aku and Uka Uka that are not present in the final game. These voice clips might have been planned to be used in the races, but they were never programmed in.

These could be most likely played when going out of bounds.

These could be most likely played when collecting 10 Wumpas.

These could be most likely played when activating the Invincibility Mask power-up.

An unused variant of the "Wrong way!" clip.

There are five additional pieces of audio for Nitros Oxide that are not present in the final game. Three of these are from an early version of the intro cutscene dialogues, whereas the other two are completely unique clips from scrapped cutscenes, revealing more information about Oxide's character.

The podium is completely silent in this build, however most of the characters grunts and sound effects are already present within the files. Some of them have been changed and others have been shortened.

The extra life sound effect from the previous games - which is used in the final game when receiving juiced up weapons - is present here, but unused.

There are only seven cheat codes in total, in which the inputs are totally different from the final game. They always end in Square and don't require you to hold down L1 and R1. 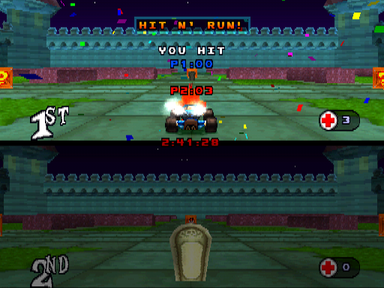 The track disappears for a brief moment when jumping in the second downhill.

The start banner has an extra object on each side.

The level features a hidden head model of Coco Bandicoot floating in the sky next to the finish line. It cannot normally be seen due to a thread that makes it invisible, but it can be drawn again by replacing the third array set 8F 00 00 08 to 0F 00 00 00.

It is not known what was the purpose behind this, but it's assumed it was planned to appear exclusively in the Japanese version, as it can be briefly seen in a pre-release trailer for Japan. The model itself still exists in the final game, although the head is not present in the level anymore.

The two Wumpa crates are missing, making it impossible to collect any Wumpa fruits on this track.

The signposts don't have collision.

As there are no controller messages when a controller is unplugged, they went unused in this build.

There is a hidden obscene message in the files that makes reference to the song Kyle's Mom's a Bitch from the movie South Park: Bigger, Longer & Uncut, released during the game's development.

There are leftover strings of earlier versions of the end of race comments, located in another file.

The memory card header contains a version number, which is set to 16.

The icon and title stored on a memory card when saving the game differs in this version. As the product code is the same in the final NTSC-U release, it's impossible to have a save file from both versions in the same memory card.