This page details one or more prototype versions of Golden Axe (Genesis).

A prototype from Sega of America, dated October 14, 1989 — 70 days before the game was initially released in Japan.

The text in the beginner mode ending was slightly improved. The "next" in "go next for" was removed, and the "your" was corrected to "you're".

The cast roll received a number of small changes: 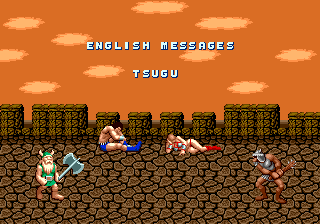 "Tsugu" is missing from the staff roll in the prototype.