This page details one or more prototype versions of Maniac Mansion (NES, USA).

The prototype of the American Maniac Mansion is nearly identical to the final, except for some elements that were subsequently removed or altered at Nintendo of America's request.

Douglas Crawford, who worked on the NES version, has a page on NoA's objections here.

If you read the poster, you get this message: 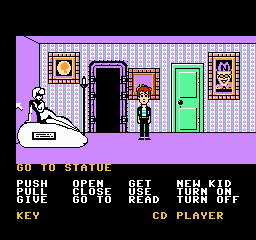 The final modified the blood a bit so the TM symbol could fit, along with changing the logo from brown to red. Notably, the logo on the character select screen retains the brown palette. 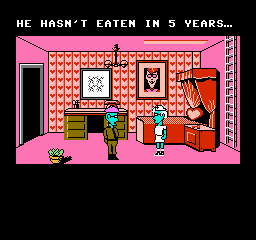 Mostly the same as the final, though one line was altered:

NoA cited the entire exchange as being objectionable. As Crockford explains:

What was Nintendo's problem with the dialogue? Was it the brutal exposition of parental neglect in the disintegration of an American family? More likely, we thought they had a problem with the dead bodies in the basement[...] In fact, Nintendo's interpretation of the speech was that Dr. Fred was a cannibal, that he was eating the bodies. That was never our intention, so we changed Ed's speech to "He hasn't slept in 5 years," which helps to explain why Dr. Fred is never seen in his bedroom.

Also mostly identical to the final, with one line altered:

Nintendo, according to Crockford, thought "brains sucked out" was too graphic for the younger audience and suggested changing it to "brains removed".

In the final, when you call Edna she assumes she's talking to her dead cousin Ted, when in reality she's having a conversation with herself. In the prototype, there is some humorous dialogue where she assumes it's a prank call:

While there's no inappropriate content to be censored here, it was removed from the final version by the porting team themselves, due to concerns that the younger, more impressionable player base would find this dialogue too amusing and start making prank calls of their own. 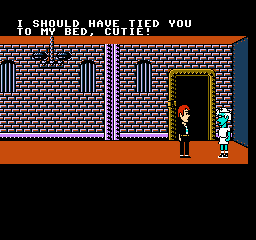 The lines that Edna says when she puts you in the prison were changed. They were obviously cut due to depicting intentions of bondage (not to mention implied rape!). The lines depend on the gender of the character that was caught.

Interestingly, the final is the only version of the game to have two variants if a character is caught. These are shown at random.

Edna is still harsher on the boys in the final, but the implied tone is completely different. 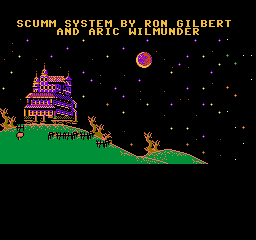 The prototype's credits include two mentions of SCUMM (an acronym for Script Creation Utility for Maniac Mansion). According to Crockford, Nintendo was worried what players might think when they see "NES" with a word that looks like "scum", so he took out the mentions of SCUMM.