Maniac Mansion is the second graphic-adventure game published by Lucasfilm Games (later known as LucasArts), and the first they published themselves. It is the first game in a series which also includes Maniac Mansion: Day of the Tentacle.

The original Commodore 64 version has some differences from the later more famous DOS releases. 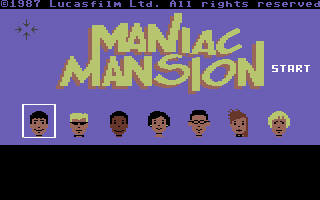 The in-game character select screen in the C64 version has a different title logo than the later DOS versions. 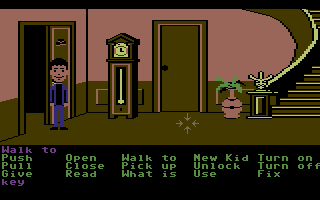 The verbs are arranged differently in the Commodore 64 original; "New Kid" has the K capitalized, and is above the "Unlock" verb rather than beneath it. 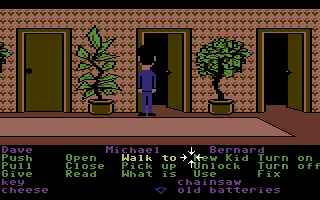 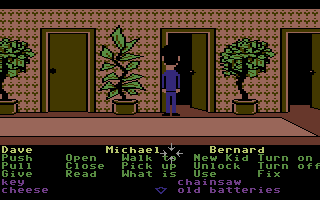 When selecting characters, the three options appear on the Sentence Line. In later versions the verbs disappear and the three characters' names appear instead. 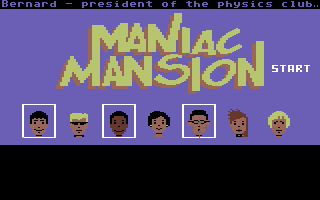 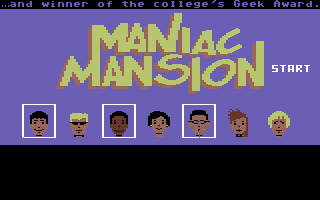 Only one line of dialogue text is featured in the original C64 version. Later version expanded this to two lines. 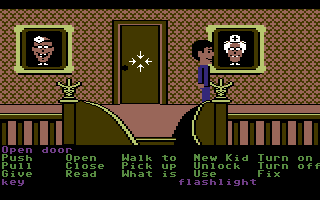 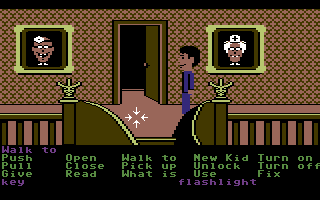 The C64 version of the game uses disk-based copy protection; later versions switched to an in-game password system, tied to a "Nuke'm Alarms" booklet that came in the game box. Thus, in the C64 release the "steel security door" on the second floor of the Mansion is absent, with just a simple wooden door there instead. 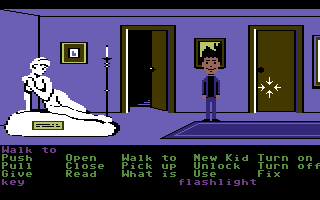 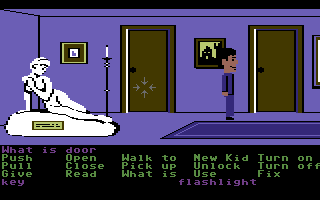 The back of the door also looks like a regular door. The DOS V1 version didn't change the appearance of the back side, but did add a keypad to disarm the security system. 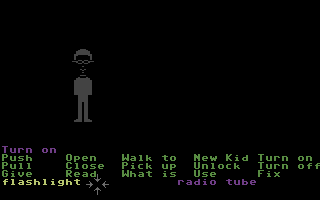 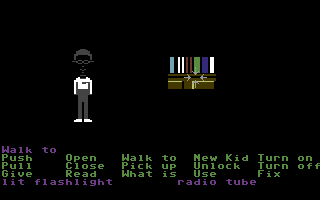 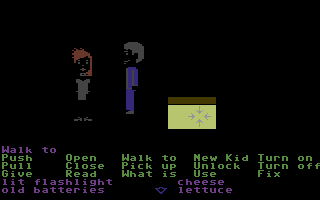 In the C64 version, when using the flashlight in a dark room, the current player characters' sprites go from a dark-gray outline to being partially highlighted, with areas in their signature dialog-text color visible. Later versions changed this so they either remained as a simple dark-gray outline or became fully visible.

The lit area of the flashlight "beam" around the pointer cursor also has hard rectangular edges, where later versions used rounded corners. 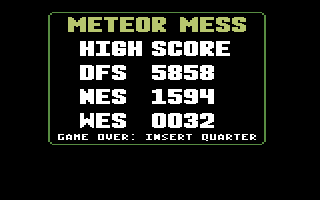 In the Commodore 64 and DOS V1 versions of Maniac Mansion, Dr. Fred, Nurse Edna, and Weird Ed's surnames on the Meteor Mess high score chart begin with the letter S. This is because in Ron Gilbert's original design proposal, their surname was "Schwartz" rather than Edison.

The DOS V2 version, and the Amiga and Atari ST ports, changed the initials on the Meteor Mess high score list to have an E for "Edison" instead. Gary Winnick has mentioned that the name Edison name was apparently suggested by the writers of the Maniac Mansion TV show.

Using the "what is" verb in Dr. Fred's lab in the finale reveals two objects that were removed from later versions, because they don't have corresponding visual data: a "girl zombie" and "boy zombie".

Sandy in the Meteor Chamber

Trying to "give" an object to the Meteor in its inner sanctum, clicking on the wrong area of screen near the Meteor results in "Sandy" hotspot appearing on the Sentence Line. Apparently an early idea was for Sandy to be found here in the Meteor's lair, instead of being shown hooked up to Dr. Fred's machine in the previous room.

The SCUMM interpreter has special hotspots coded for certain verbs, including "Give". Apparently Sandy's hotspot was incompletely erased from the scene.

This quirk is present when using the original interpreter or a C64 emulator, but may not be replicable in ScummVM's virtual-machine environment.

Unlike in other versions, the grandfather clock's pendulum in the mansion hallway is not animated.

When Purple Tentacle apprehends a character in the vestibule to Dr. Fred's laboratory, his line in later versions "Dr. Fred isn't paying me for nothing!" is absent.

Some minor color differences result from the C64's 16-color palette being slightly different from the IBM EGA color palette. Other changes seem to be there just for the sake of it, though. For instance, the Pepsi machine in Dr. Fred's lab has some blue coloration on C64 that disappears in the initial DOS release. 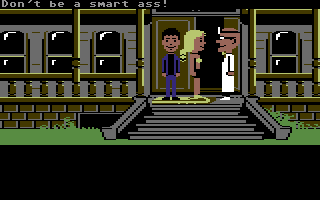 In the ending where Dr. Fred, Dave, and Sandy appear on the Mansion front porch, Dr. Fred tells Dave, "Don't be a smart ass!" Later versions replaced this with "Don't be a tuna head!", reprising an insult from the game's intro.

By using debug to enter the observatory before performing the actions to reach there normally, the player can trigger a normally unused death upon leaving. They will disappear and the plant will shout "YUM!!", resulting in a death. It is unknown why this was made inaccessible through normal means. Unlike the later DOS versions, this can be done regardless if the plant is grown or not.