Day of the Tentacle

From The Cutting Room Floor
(Redirected from Maniac Mansion: Day of the Tentacle)
Jump to navigation Jump to search

Day of the Tentacle is a comedic point-and-click adventure. It's a sequel to Maniac Mansion, which is fully playable here as an in-game bonus.

After booting up the game, enter swordfish on the keyboard. Then, press Ctrl and D together. Alternatively, some of these work in ScummVM by adding -d0 to the startup parameters. At any time during gameplay, press one of the following keys/key combinations:

The Human Chart seen on the wall in Doctor Tentacle's Office could originally be picked up, as seen in some pre-release material. You can load into a state where Laverne has the Human Chart in her inventory by using Boot Parameter 333 (see Debug Mode). It cannot be flushed to other characters and no longer has an icon. It has the exact same dialogue as it does when it's attached to the wall when the player interacts with it. 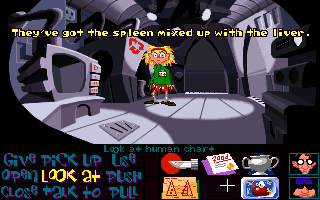 Laverne Doesn't Get Stuck In The Tree

As mentioned in pre-release material, Laverne would originally have become playable earlier on, possibly at the same time as Hoagie. Chopping down the cherry tree would still have freed the Chron-O-John from the tree, but Laverne wouldn't be in the tree at this time.

If you regain control of Laverne before you cut the tree down in the past (this is possible using Boot Parameters to pick up the Battery Plans out of sequence, see Debug Mode), Laverne has some unique dialogue for interacting with the Chron-O-John while it's in this state.

While your game is in this state you can see that the tree was originally meant to have the name "four-hundred-year-old kumquat tree". In the final game this goes unseen as removing the tree from existence is what causes Laverne to become a playable character in the first place. 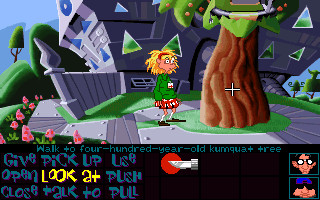 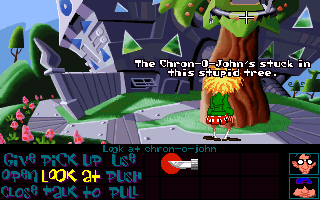 Laverne also has an unused alternative animation for falling out of her Chron-O-John, where she plummets straight into the ground rather than getting stuck on a tree branch.

The used animations are shown with the unused one here, for comparison's sake.

There are some Easter eggs that don't appear to be documented anywhere else. 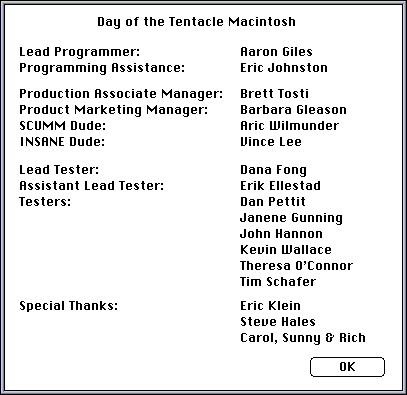 This text-only credit screen exists in the Mac resource fork, but an illustrated one using the game's fonts and color scheme is used instead. Two changes were made to the above roster:

In the floppy disk version, the speech and subtitles style dialogue is only present up until the moment the first Chron-O-John cutscene is over. The rest of the game is subtitles only. The dialogue that is present is much more heavily compressed. Here's an example from one of the first cutscenes:

This version of the game also includes copy protection, whick kicks in during the cutscene where Bernard picks up the Battery Plans. When Dr. Fred looks at the Plans, it cuts to the Super Battery Plans screen and you have to adjust the oil/vinegar levels and add/remove croutons to match the numbers shown in the manual. This is still technically present (and even fully voiced!) in the CD version and can be accessed in ScummVM by running Script 203 while looking at the Battery Plans (Room 65).

In the Macintosh version, Maniac Mansion is accessed by using Weird Ed's Computer five times in a row, instead of once.

Programmer Aaron Giles explains, "Since Maniac Mansion had never been ported to the Mac before, and since we were on a fairly tight schedule for Day of the Tentacle and wanted to concentrate our testing on the primary game, we compromised by still including it, but making it a bit more of an Easter egg than it was in the DOS version."