Sam & Max Hit the Road is a classic LucasArts adventure game based on Steve Purcell's madcap Sam & Max: Freelance Police comics. Notable for ditching the "bottom half of screen filled with various verbs to click on" interface seen in previous LucasArts games in favor of a more minimalist, icon based system.

Like many other games on the SCUMM Engine, Sam & Max has a built-in debug mode. However, the variable to enable it has been disabled.

It can be re-enabled by opening samnmax.001 in a hex editor and changing the sequence of bytes starting at 0x3995 from 0C692622 to 06696969. This bypasses the need for a debug password completely, and debug mode can be enabled after booting up the game simply by pressing Ctrl and D together. This edit has a minor side effect of replacing the word OK in the Save menu with ''. This edit has only been tested on the CD version of the game. It won't work in ScummVM, only in the original DOS interpreter.

At any time during gameplay, press one of the following keys/key combinations:

If you're curious what these debug options look like and don't want to crack open a hex editor to see them, here's a video showing them all:

There are a bunch of unused scripts which are mainly storyboard placeholders. These scripts are being parsed here in a readable fashion, while removing non-interesting junk and throwing in some insight. You can access them in ScummVM by entering debug mode, teleporting into the appropriate room and hitting script x run.

Although the majority of the script is used, one message in the answering machine remains unused for whatever reason.

This seems like an early cut-scene on the way to implementation, as it was left alone for quite a long time. Since Sam and Max's dialogue are legal say-line events, they have corresponding voice clips.

And here are the unused pieces of dialogue associated with the above script:

Early versions of the T-Rex's Mouth script switched to this one when trying to use Twine on it. It also features some unused dialogue which was a pretty straight hint on what to do. In the finished game, you're given hints more gradually.

And here is the unused dialogue associated with the above script:

Another placeholder from when bungee jumping animations weren't done yet.

Some very strange, unfinished graphics of what appears to be early versions of the Bigfoot Disguise can be found stored near the final Bigfoot Disguise graphics. Only a forward facing graphic appears for each of these.

Bernard from Day of the Tentacle!

Oddly enough, a few animations of Bernard from Maniac Mansion: Day of the Tentacle appear in the files of this game right next to the previously mentioned Early Bigfoot Disguise graphics. They go completely unused, although of course Bernard was used as a base for the Snuckey's Employees (which are not stored anywhere near the Bernard graphics).

The sprites and their Day of the Tentacle counterparts are shown here side by side. The only difference is that the palette is noticably broken in the Sam & Max copy.

This peculiar STOP icon was used in early versions of the game to interrupt conversations, or as a placeholder icon for inventory items. Interestingly, it is not by any means a default graphic for missing icons, it must instead be willingly programmed into an object's pickup script. Owning any object with no pickup programming will just glitch your inventory.

This image, stored amongst the inventory icons, appears to be a crop of one of the internal sprite sheets used when developing the game. It contains versions of some of the game's inventory icons without the bright red border, which is usually removed by replacing the color with a script at run time. It also seems to contain an earlier version of the Day Pass icon, which is straightened out rather than being at a bit of a tilt. Oddly enough, the used tilted version (sans red border) can also be seen in the top right.

The image also includes some notes written by the developers. The top ones aren't possible to read, but the ones at the bottom seem to say !/?, and are next to the Exclamation Mark and Question Mark dialogue choices.

The image's dimensions match up perfectly with the interface seen at the bottom of the screen during conversations, and the object this image is assigned to is named "dashj", so it's most likely just a random piece of placeholder art hidden at run time used to help position the icons correctly.

This odd icon, which is likely just an incorrect crop of an internal sprite sheet used when developing the game, shows half of the Tar icon and half of the Mammoth Fur icon. The Mammoth Fur icon seen here seems to be a little different from the one actually used in the game, having some greyish pixels in the top right that aren't present in the used icon. It shows up in the game's files three times, and is actually stored just before the rest of the inventory icons, amongst the conversation icons.

Objects are static elements in SCUMM the player interacts with. Some times objects are just coordinates with no graphic, sometimes they do have some graphics to display on top of the background. Each object can have a name, a code header and a script to run when it's been poked by the player.

In this room's case, we have a total of three objects with no graphics, which are completely disabled by the coding.

Dialogue for looking at the Diner Door.

Dialogue for looking at the Road Kill.

Dialogue for picking up the Road Kill.

Some idea of what the Road Kill may have looked like can be found in the original background illustration of this room, found in Rogue Leaders: The Story of LucasArts. 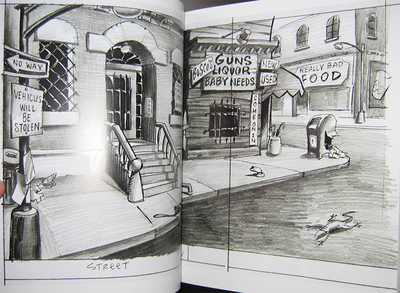 Dialogue for looking at the Dead Guy.

Dialogue for picking up the Dead Guy.

It's interesting to note that the "Antenna" Sam is referring to is exactly the one in your office. If you go into Room 7 and pick up Object 67 using debug mode in ScummVM it will display a STOP icon in your inventory, further proving it was once an obtainable object.

These are voice clips that are supposed to be called by in-game scripts, except they never are because the conditions to do so just can't be met. There are some recordings using what appears to be leftover dialogue from the Computer Entertainment Show (CES) prototype, and basically any obsolete, even development-related SCUMM say-line event has its own vocal counterpart.

All subtitles have been copied directly from the game's scripts, except where noted.

Dialogue that would once have been triggered by looking at the Antenna.

Used when looking at the merchandise with var240 set to 1.

Used when looking at the merchandise with var240 set to 6.

A short conversation that would have been used for asking Max about either of the Snuckey's Video Games.

This dialogue isn't referenced in the game's scripts anymore, for obvious reasons. The subtitle has been transcribed manually.

Used when looking at the merchandise with var240 set to 3.

Dialogue that would have been used for asking Max about the Snuckey's Flip Books. The response given by Max would be the same as the one used for the Paper Dolls, "I say we go down to the scummy side of town and give a bunch of hoods some paper cuts."

This was possibly an unused opening dialogue.

It's not immediately clear how this would have been triggered.

Used when trying to pick up merchandise with var239 set to 0.

Used when trying to ask Snuckey's Employee about merchandise he doesn't have dialogue for.

Room 19 is a copy of Room 18, the Wak-A-Rat minigame. It seems to be used to store some of the images seen in the actual Wak-A-Rat minigame, such as bonking Max on the head with the hammer. For some reason, it contains a unique background image which is exactly the same as the used one, except it's missing the score counter in the top left. It also seems to house the conversation for riding the Tunnel Of Love again.

Most objects in the game have appropriately uninteresting names such as "office-window" or "twine-tram-platform", but a few near the start of the game have names like the sort seen in other adventure games by Lucasarts. Other object names seem to have been written by someone who was hopelessly bored, with names like "ugh" and "bite me!"

Room 1, the room which contains the logo seen right at the start of the game, contains some amusingly named objects: "our-sainted-logo", which appropriately enough, is the Lucasarts logo, and "max-the-object", which is the shortcut to use Max stored in your inventory.

Room 7, Sam and Max's Office, the first non-cutscene room of the game has a few self-explanatory object names that can't be seen: "office phone", "door", "roach farm", "antenna" and "roach food" (the sandwich).

Room 9, Apartment Exterior, has some more self-expalanatory object names: "liquor store", "beat up DeSoto", "pile of mail", "road kill" and "dead guy". The latter two are both disabled by game's scripts, and are documented in the Disabled Objects section.

Room 26, Golfing at Gator Golf, has an object called "gamera".

Room 50, Brain Of Bumpusville Robot, has 5 wires all called "s".

Room 94, the room used to store the inventory, names the background "dsf".

There are two versions of the game, a floppy release which does not feature voices except for the intro, and a "talkie" CD version which is fully voice acted.

The floppy version also features a copy protection where you have to match Sam or Max's doll clothing as seen in some manual pics. If you fail twice you get booted to the DOS prompt. This check was removed in the CD version, although data for it still exists. Some kind of sound loading screen is instead put in its place.