This page details one or more prototype versions of Michael Jackson's Moonwalker (Genesis). 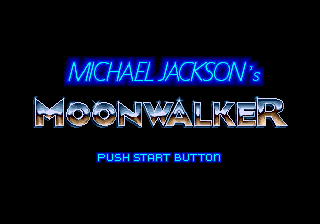 A sample version of Moonwalker was discovered by brian the hedgehog in September 2017, and later acquired and dumped by Landon White who released it on August 6, 2018.

This build is dated April 24, 1990, four months prior to the final release, and contains many differences - most notably the presence of a full version of "Thriller", which was removed from the final version.

The prototype's ROM header is copied from Kujaku Ou 2.

"PUSH" was changed to "PRESS" and a ™ symbol was added.

According to the game's BGM composer Hiroshi Kubota, this was an early instance of altering a video game soundtrack due to music licensing issues. As their deadline approached, the developers were informed that only compositions by Michael Jackson himself were available for Moonwalker's BGM. "Thriller" was written by Rod Temperton, and thus was off-limits.

Of course, either deliberately or by mere oversight, three small snippets of "Thriller" still made it into the earliest retail copies of the US release.