The April 15, 1994 prototype of Star Fox 2 was dumped around August 6th, 1999, and has many differences from later builds; It still feels more like a tech demo than an actual game at this point in development.

NOTE: This prototype requires the console's WRAM to be initialized to zero at boot, otherwise it will lock up at a black screen. It may not work in some emulators as a result. (In other words, open it in snes9x and reset it once.)

A mode which got cut near the end of development.

Accessible in the 1994 and 1995 builds is a CONFIG MODE, labeled CONFIG on the title screen, which functions as a sound test. This build only plays sound effects, while the 1995 build adds background music playback, cpu to audio unit register writer (4 bytes, named ports), a more stylized font, and a cursor.

The options themselves in this build are simple to understand and self-explanatory.

The controls here differ between the builds:

An early, unused version of Fox's portrait from the 1-Player Mission mode character select screen, along with three duplicates, can be found buried in the ROM in a format which can be decompressed by the Super FX chip. The three duplicates are likely placeholders for Falco's, Peppy's, and Slippy's portraits, which do not exist in this build. Compared to the version used in the later prototype and final build, Fox lacks most of his shading, his head is slightly larger, his eyes are brown instead of blue, and his facial expression when selected is...frightening.

These sprites, which are loaded with the other graphics in the Battle mode menu, appear to be intended for when both players have selected their characters. However, the screen just fades out with a mosaic effect when this happens in this build. 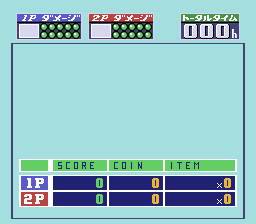 The table at the bottom, gets printed on the screen that appears after you press Start, but it's hidden by other layers .