This page details one or more prototype versions of X-COM: UFO Defense.

There are multiple Pre-Release demos for the game, two for the original release in the UK, and another for the later American release. There is also a later German demo based on the second UK pre-release.

This was a special demo created exclusively for the British PC Gamer magazine, and released on the cover disk of their 5th issue from April 1994. The demo of course uses the original UFO: Enemy Unknown name for the game. It also features a mixture of soldiers with differing weapon and armour types, with each soldier named after a PC Gamer member of staff, including future Star Wars writer Gary Whitta.
While the demo was released in April 1994, filestamps show many of the files (including the PC Gamer specific intro slides) were created in February of that year. The demo consists of a night time terror mission as X-COM do battle against Chryssalids and Snakemen. If that wasn't enough of a trial by fire, the demo doesn't even give you any Electroflares!
The map is a set level, and not random. It consists of the Skyranger parked near some parkland cut off from the main area by a road. Across to the East there is an apartment building and a warehouse full of Chryssalids.

There are many changes visible in the demo, and a lot of cut content in its files.

The player is given a fixed squad of 6 X-COM soldiers, all at Rookie level. Their composition seems to be deliberately designed so the player can test out a range of different weaponry and armour, and also gives some nudges towards re-organising the squad for a more optimal loadout. For example, the soldier with the lowest strength stat has the Heavy Cannon and loses Time Units each term due to being over encumbered. So too another soldier starts with no weapon, but there is a spare Laser pistol in the SkyRanger. The below are the only X-COM weapons/items in the demo, however it is possible to hack in more items in the demo code into the mission.

The demo features an early version of the initial equip screen and also the in-game inventory screen(s). 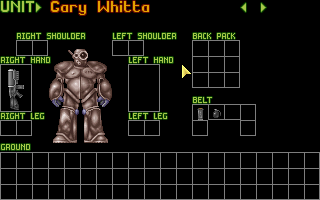 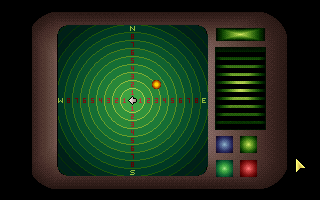 A simpler brown coloured Scanner screen is used in the demo. This looks superficially like the early Map screen design seen in the Pre-Release coverage. The map screen in the demo is identical to the final game's, however. 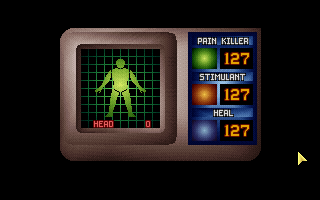 As with the Motion Scanner, the Medi-Kit has a similar crude early graphic when used. 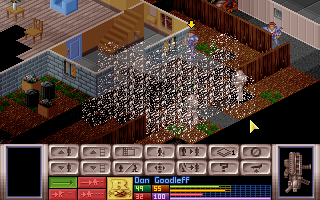 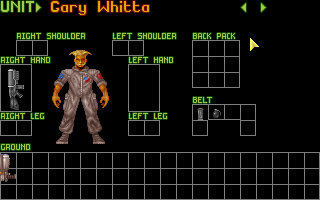 Items with either graphical changes from the final game, or those that were cut entirely

The demo begins with with screens of a UFO being detected by a Brazilian X-COM base and then the shooting down of that UFO over the Amazon rainforest. The text at the end of the demo also talks about recovering a UFO as if it were intended to follow a UFO recovery map. This is all elementary however: the slide just before the Battlescape part begins explicitly says the mission is going to be a UFO recovery in the Amazon jungle. It's quite surprising that the demo is actually a city terror map, then.
In fact this original theme is present in the PC Format magazine demo released at the same time, which consists of UFO recovery mission against Sectoids in a Large Scout UFO in the jungle. What makes this clearly last minute change odd and risky is that the Sectoid spritesin the other demo are much closer to the final game's than the unfinished Snakemen ones and actually have animation frames for holding their weapons. It's surprising then that the demo in fact completely abandons this original concept.

Presumably it was changed at the last minute either to differentiate it from the PC Format demo (the PC Gamer one is highly customised and unique compared to the more generic demo PC Format got) or because the more exciting Snakemen/terror mission assets were created, even though they were unfinished. After all, what could be a more nail biting introduction to the game than a night time terror mission against Chryssalids? Clearly this demo was considered the better of the two, as the American demo is based on this and not the more coherent PC Format jungle demo.

The jungle mission briefing slide is corrected in the later American demo.

The static slides introducing and ending the demo are named screen00-22. However, images 5, 7, 8, 12, 15, and 17 are unaccounted for. Possibly there were originally even more comprehensive instructions planned? 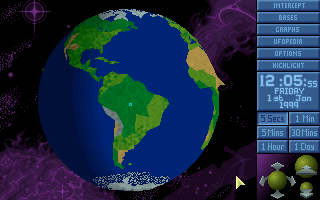 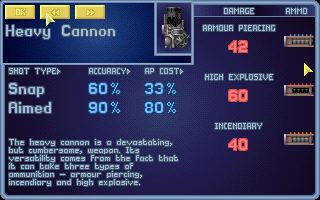 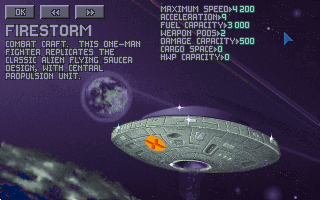 These are samples of a woman with a British accent that seem to be related to the interception minigame, presumably they would be combined to report on the action as it occured ("UFO Damaged", "Interceptor Damaged"). While the "Damaged" sample is stored as 8000hz as per the final game's samples, the other two seem to be of a lower sample rate. They are recorded here at 4500hz as this seems to be around the correct speed. They are very low quality samples.

There are several unused files in the GEODATA directory marked with ".old" file extensions.

Inside the directory UFOGRAPHS is a file called icons4.lbm. This seems to be a very early concept art picture of the game's Battlescape interface! Most of the buttons roughly line up with commands from the final game, although the "2D/3D" button is interesting and may have been to switch between an isometric and flat 2D view somewhat like Laser Squad's firing mode. In fact it might even be possible that this image is from the Laser Squad 2 period of development (it has 256 colours so can't be from an Atari ST game). It's dated from July 1992 which seems quite late for that to be the case, however.

The demo includes disabled debug code for the game that can be re-enabled by editing the executable. If position 0x5D66E in ufo2exe\ufo.exe is set to 01 with a hex editor, the debug mode will be enabled. Once enabled the following occurs:

It's not clear if there are other functions accessible from this mode.

Also included with the demo is the file descurs.pck. This is not present in the final game, and is a series of mouse cursor icons clearly from some kind of debug mode. Based on the options it's likely used for setting AI routing paths through map segments. It's not known if there is some way to enter this mode in the demo or if this is a leftover from some kind of external editor program.

The executable also contains the following text strings used by the debug mode:

This was a different demo of the game, released at the same time on the cover disk of PC Format issue 31 from April 1994. This is clearly the original design of the demo, seeing as it's a UFO recovery mission that takes place in a jungle as per the introductory slides of the PC Gamer demo. The base files the two versions share are identical, but this demo includes jungle and UFO graphics tiles that were not present in the PC Gamer city based demo. The executable is slightly smaller for this release and is timestamped from two days after the PC Gamer release.
Strangely, the pictures on the box of the American release of the game (X-COM: UFO Defense) are all taken from this demo. 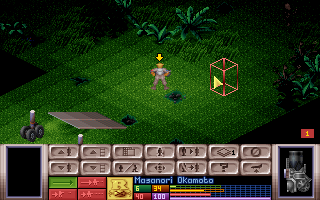 The jungle map terrain is numerically the first tileset listed in the final game's files (so was likely made first - something confirmed by the weird MOC1.LBM file that is a picture of the jungle terrain tiles used solely for setting the correct palette in all versions of the game), and this along with the fact that the Sectoid's graphics were mostly finished suggest they were probably the most complete and therefore logical best bets to include in a public demo.

This time the soldiers have a totally different loadout, and use generic games chosen from the game's random pool. They are not named after magazine staff. None are armoured, so you get to see the early soldier graphic with their lovely beards! Including what is clearly supposed to a woman with one... 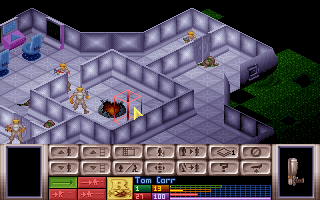 The file U_DISEC2.MCD is an earlier version that includes cut tile graphics for a kind of basin full of blood, a metal grate in the floor, and destroyed graphics for the robotic dissection arms. These are present in the final game files but unused as the MCD has had them purged from its contents. 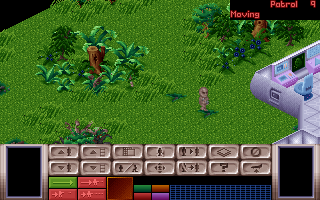 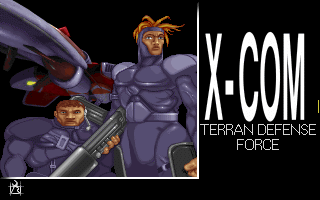 A reworked version of the PC Gamer UK demo, but using the assets and code improvements of the now final game, specifically of version 1.2. An extremely important demo that was instrumental in the game's success in the American market, when it was released in May 1994. Hosted online for download by the likes of AOL[1], it quickly put the otherwise mostly ignored game into the spotlight in the USA through sheer word of mouth. File stamps in the demo date back to April 1994. Strictly speaking this was still a pre-release demo as it was targeted at the USA where the game was not out, whereas it had already been out for two months in the UK and Europe.


The original release of the demo was in a zip file called "xcomdemo.zip"[1] that contained a readme file and a further self-extracting archive.

Note the entirely different early name for the game and that X-COM is frequently referred to as "XComm".

The soldiers you are given in this newer demo have been slightly changed from the first one. Soldiers now have names from the final game's automatically generated pool, unlike the real life names used in the PC Gamer demo. Once again a soldier has an suboptimal weapon for his build, and you get to play with an Autocannon and some smoke grenades. However you now also get one less Power Suit in the team. There are also two Electroflares in the SkyRanger. 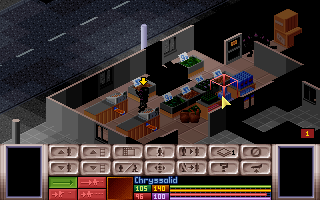 Most of the slides are identical to the first game, but with all references to PC Gamer magazine removed. There are the following important changes, however: 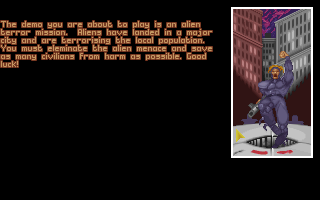 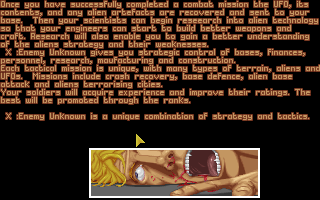 A peculiar demo that was released around July 1994 in Germany. Timestamps on files vary, with some as late as May 30 of that year, while the rest line up with those of the original British demo, generally from February 1994. While the game had been out for some time at this point it still uses the ancient pre-version 1.0 build of the game.