Psychonauts is a cult-classic, underselling game about a psychic boy that infiltrates a psychic summer camp. Using several kinds of psychic powers, Razputin must try to stop the children's brains from being stolen. In his adventure, he'll navigate inside other people's minds and help them with their psychological turmoils. It's mostly humorous, but some small details may prove to be... incredibly terrifying. Some of them might have actually been considered too extreme, so parts of the script got left in the cutting room floor.

The Li-Po Backstory Document is a leaked backstory document accidentally placed inside the files of the Psychonauts Steam port, though it was quickly removed.

Linda the Lungfish has 3 different death animations, but only one of them is used ingame (and it can barely be seen). The first, "lungfishdeathold", is incredible simple and rough and most likely temporary. What seems to be a more completed variation of it is present as "lungfish_death". These animations were likely both at some point used as part of the scrapped boss battle with Linda in Brain Tumbler Experiment.

The final death animation is called "driftwooddeath" and it actually is used when you shoot the shadow lungfish in the final game, but the visual effects on her make it almost impossible to see it unless you know what you're looking for. The strange name suggests it may have had some other purpose originally, but this is just speculation.

Various characters have animations relating to hypnosis present in the game files. These are part of an incredibly old concept where the player (probably still as D'artagnan at this stage) would enter minds by hypnotising the characters with a gold watch. 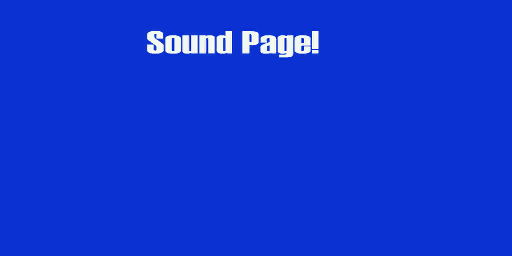 Inside the game's files is a simple background for a "sound page". It's not clear what exactly this background was for, probably an early version of the sound options menu or possibly some kind of sound test.

A still image of Double Fine's logo, likely a placeholder before the animated one was put in. 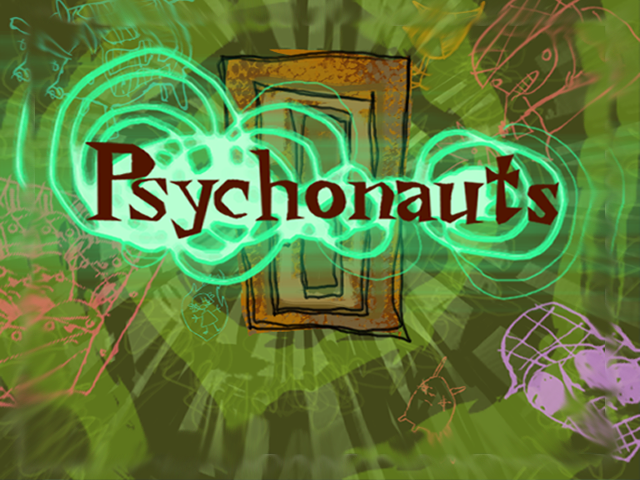 This image is used as the background for an early version of the main menu, presumably from before the 3D brain menu was implemented. This early menu still exists in the game's code, however the menu is dummied out and the code to show it is replaced by the code that normally shows intro videos and loads the final menu level.

An eye that closes and opens, bunched in with the placeholder title screen. 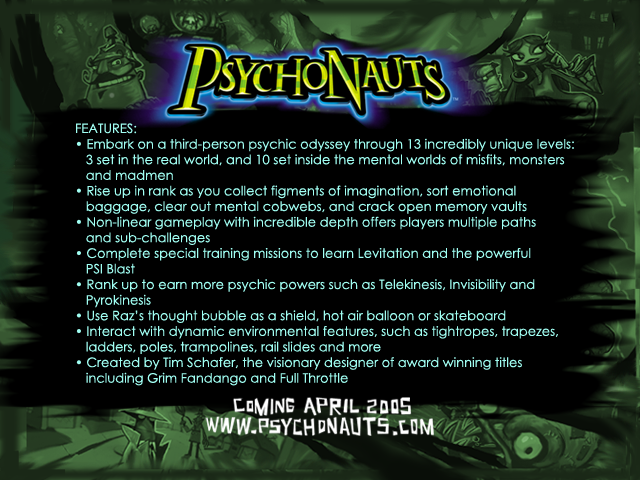 A leftover splash screen, shown at the end of demo versions of the game. 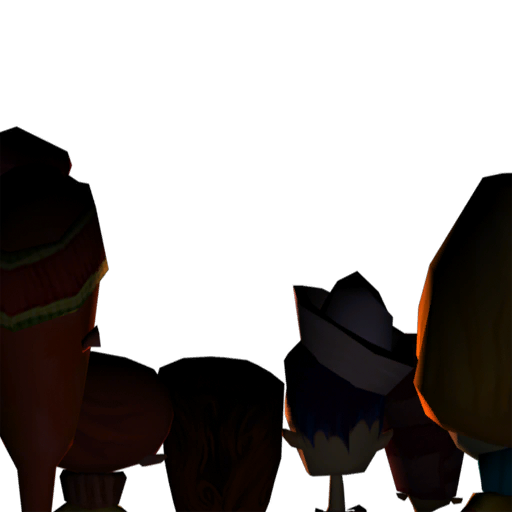 A silhouetted picture of the campers.

A sound loop intended for the loading screens. A similar sound is used in the sequel.

The commonmusic.isb soundbank contains various snippets of music that aren't used in the final game.

Seemingly an old jingle for dying. The final game doesn't have a musical cue for death, only sound effects. Notably the filename references the original protagonist of the game, D'Artagan. The game actually does try to play this sound, but when loading the file it mistakenly calls for Sounds/Music/Dart_Death where it should just be looking for Dart_Death, meaning no sound ever plays.

This sound does work fine in the Li-Po 553 prototype.

Another unused jingle. This sound was actually intended for a scrapped fight with the shadow lungfish in Brain Tumbler Experiment, where it'd play on beating the boss, but it was scrapped alongside that fight.

Musical cue for finding an arrowhead. The final game only produces foley sounds, or a different sound in case it's collected within someone's mind. The game loads this sound (or at least attempts to, it may be affected by the same bug as the above death sound) but never tries to play it.

Musical cue for finding PSI...? Could be in reference to either the PSI challenge markers or the PSI cards scattered about the world. Neither has a musical jingle in the final game, only foley sounds.

An unexpectedly long music track for finding PSI Markers. Given how long it is, it's possible that finding challenge markers was once intended to be accompanied by some kind of cutscene, otherwise this sound would have probably been very strange.

A file called SplashScreen.aif is present in the soundbank. It contains 200 milliseconds of silence and seems to be an artifact from when the game's XACT project was converted to ISACT. As ISACT does not support loop points, it splits files with them into 2 seperate tracks, an intro and a looping body. The title screen track doesn't have a real intro and loops in its entirety, so this file is essentially a dummy file. 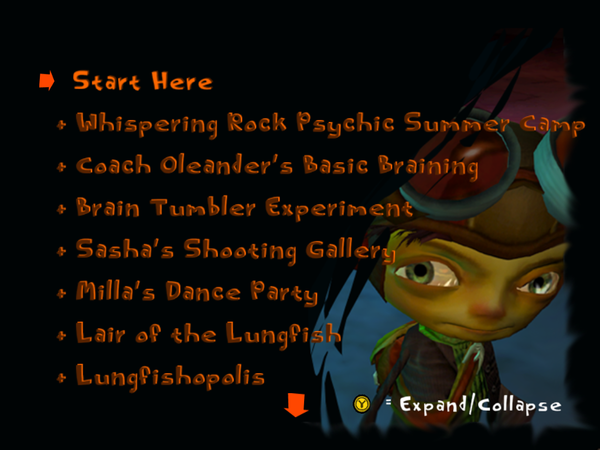 Present in the game's code is this level select screen, which can be re-enabled through hacking.

The top "Start Here" option takes you to the regular menu screen. Each actual level's main heading acts as a directory, you can select the heading itself to go to the first map of that area or expand the directory to list all the maps that are part of that level. Loading into a map will update your story progression and abilities/inventory to a state that matches up with that point in the game. Using the menu to go forward updates progression, but using it again to go back to earlier levels will retain any current progression.

This level select can also be seen when booting up the December 14th prototype build, where it functions identically. The main difference being that no levels exist past the asylum grounds in that build, so the level select ends there. Naturally, in the final game, all levels are present and selectable.

The Two-Headed Dad Monster's textures feature an upside-down pentagram on Raz's Dad's forehead, which is not present on Raz's dad before his transformation. 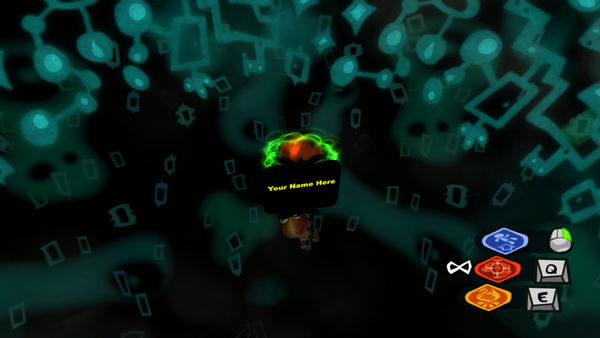