Setting word $6482 to a nonzero value (for instance, with the patch code 006482:FFFF) will allow you to play during the demo. By default it will try to overwrite ROM with your demo play, but the current address of the demo data is stored in longword $FFEA42. You can use the following set of Gens/GS patch codes to redirect demo recording to SRAM (in an emulator that supports automatically writing to SRAM, like Gens/GS) and then play it back by disabling only the $6482 code: 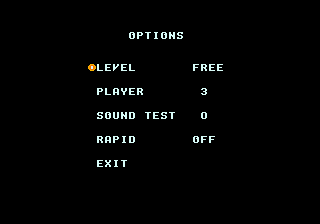 A text string FREE is stored right after the EASY NORMAL HARD level settings in Options, but the programming in the menu doesn't include it. You can force the game to add it with Action Replay codes 000858:0003 + 00086C:0003. In game, when set to FREE the game executes an operation at 002CA0 but it's not clear what this does - ships and credits are not affected...?