Ranma ½: Hard Battle is a one-on-one fighting game by NCS Corporation. It was based on a popular animé and manga series by Rumiko Takahashi and features many of the prominent characters. 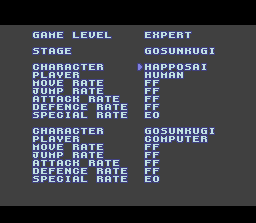 After you select a character, hold R+X+A and before the round begins, you'll call up a debug menu that will allow you to change various aspects of the game, including the characters you and/or the CPU are playing as, their various stats, and the stage you're fighting on. You will notice that one of the characters you can select is Happosai. Normally, he is only the final boss for Pantyhose and not playable. 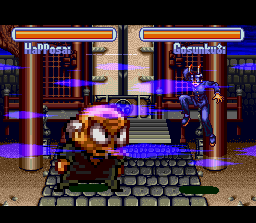 With this code, you will find that he is fully playable. You can even perform all of his special moves, though it may take some experimentation to figure them out. Not only can you play as Happosai, but you can play as other characters against Happosai (normally, you would only be able to fight him as Pantyhose.) 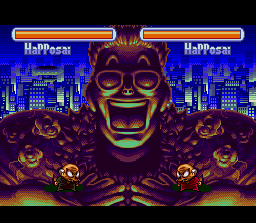 If you set both players to Happosai, the second player will display an unused palette. It is apparent that even if he wasn't meant to be playable in the one-player mode, it was most likely intended for him to playable in the 2-player mode, but he was not left in the final game. Happosai vs. Happosai will cause the game to crash when the match is over. 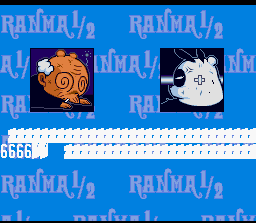 The most likely reason he was left out is because the developers did not finish adding in his between-round dialogue. Sometimes the game will skip the dialogue scenes altogether, but when it does display them, the text will be scrambled, or will be called up from other characters in the game. Also, Happosai's profile picture (even if you win) is always an unused "defeated" pose. Even when you defeat Happosai in the normal game, you are never shown this picture of him. This code is the only way to see it.

In the sound test from the Options screen, one of the sounds, number 0F, is never actually used in the game.

A somewhat typographically challenged copyright message is stored at xFF00:

The Japanese and European title screens display a fiery animation, the US version omits this (although the palette is still animated, invisibly). The logo designs are also different.

Several characters (with some exceptions, such as Ryoga and Happosai, who would've become Roland and Ernestin) use their French names in the European version. Curiously, this includes the English release.