Robin Hood: Prince of Thieves is a Zelda-like action/adventure game presumably based on a movie. 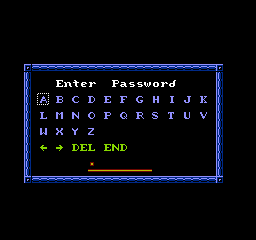 It's fairly well-known, but this game contains a hidden password mode, which allows you to skip ahead to any segment of the game, including straight to the ending. At the title screen, press A (×8), B (×8). Note that each password only gives you all the items you strictly need to succeed in that area, and sometimes not even that (CASTLEIN for example does not provide the Druid's Dagger).

While playing, open the menu, highlight "EXIT" and press A + Start. The credit list will pop up. 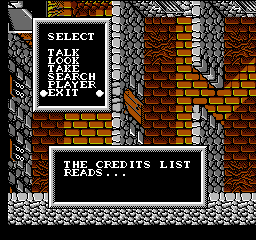 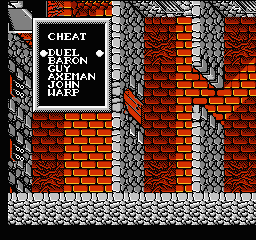 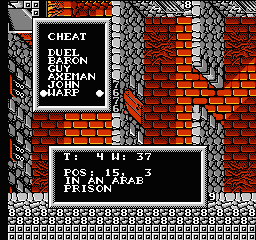 While in debug mode, pressing Start will show the cheat menu instead of the regular menu. This menu allows you to fight any duel in the game or warp to any location. Additionally, your HP will be always 100, rendering you invincible, and you can walk through walls and other obstacles. 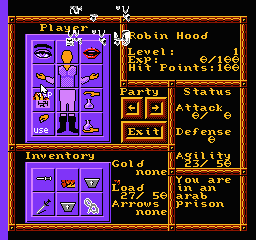 Unused items in video games are nothing new... but it's a rare case when they're actually mentioned in an official source! Many of these items were included in the manual, but were left out for whatever reason, leading many a player to fruitlessly search for them. 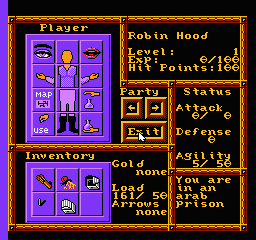 A few miscellaneous items/objects can also be made to appear in the inventory, something which never occurs normally.

The NSF file contains three songs not used at any point in the game:

Track 4 on the NSF. A rather heroic song that sounds like it might have worked for the opening/title or ending.

Track 18 on the NSF is a short, victorious-sounding fanfare.

Track 25 on the NSF is another short, victorious-sounding fanfare, although different from the previous one.

Assigned variable names are stored in the ROM at 0x17E49

The first section of uncompiled, commented code can be found at 0xFBCF in the US ROM, 0xFDB6 in the German ROM, and 0xFDB6 in the European ROM. They have been combined here: