This is a sub-page of Sonic Adventure 2: Battle.

Sonic Adventure 2: Battle is a port of Sonic Adventure 2 for the Sega Dreamcast. There are actually tons of changes from the original version, ranging anywhere from tiny to huge.

As can be expected, almost anything having to do with the Dreamcast was removed in the port, such as the file selection menu, the posters in levels that referenced the Dreamcast, and button prompts.

Despite not being able to be accessed without the use of cheats, the game's hidden debug menu was also enhanced for the GameCube release.

The multiplayer was overhauled for the GameCube release, which is the entire reason why "Battle" was tacked onto the end of the title on GameCube.

The Dreamcast version of the game included a number of seasonal costumes for Christmas and Halloween in 2 Player mode. These costumes could be enabled through special menu themes that (like all themes in the game) were unlocked via downloads to the VMU. They were removed entirely from the GameCube version.

Like the other alternate costumes in the original game, the seasonal outfits are completely aesthetic changes and do not affect gameplay at all.

The Chao World underwent many changes between the two versions as well. 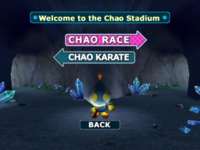 The Kindergarten was mainly adjusted to accommodate features from Chao Adventure and the Dreamcast's Internet features that couldn't be ported to the GameCube.

There are many slight modifications to most of the cutscenes between the two versions. In general...

The intro was revised far more than any other scene in the game:

The scene where Sonic and Shadow meet for the first time was also heavily revised compared to others:

Sonic Climbs Onto the Shuttle

Before Sonic vs. Shadow 2

Rouge Breaks into Eggman's Base

Shadow Runs to Save Rouge

After Shadow vs. Sonic