Hail, knight! You've been fulfilling your duty of exploring the Clockworks and their mysteries for years now, but now we present a new task: can you explore the mysteries of Spiral Knights and uncover what might have never seen the light of Cradle?

Inside rsrc/item/gear/helm/shroomcap is a fairly old mushroom helmet with two variants, "Shroom Cap" is orange with player-colored spots, while "Ronin Gasa" is a light yellow striped mushroom. Both are very blatantly unfinished as Shroom Cap contains noticeable gaps in the model and Ronin Gasa has four gaping holes in the model above the player's face.

Surprisingly, this item was given rendered icons with the 2013 HUD redesign just as the beta items were, despite how unfinished it is. In particular, the Ronin Gasa icon erroneously displays the model's holes in full view.

Located in rsrc/item/gear/helm/doubleploom is the Super Brawl Crown, which bears a striking resemblance to the Royal Jelly Crown, though they aren't identical. Super Brawl was the original PVP mode in Spiral Knights, and the winners in each category would receive this costume helmet as a prize. It lasted for seven days before being removed from the players' inventories and given to the next week's winners. When Super Brawl was removed, the crown went with it, and the mode was eventually succeeded by Lockdown. Despite that, it also got a rendered item icon, and a rather flashy one at that.

Nick, the head developer of Spiral Knights for several years, left the game in early 2014 to pursue his own development. He would often use a GM-only costume exclusive to him to make himself look like an Impostocube, his "avatar". Despite his long absence the item icon for this costume still exists in rsrc\ui\icon\inventory\costume\helm. 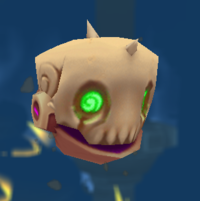 Included in rsrc/item/gear/helm/doubleploom is a slightly odd helmet that resembles a Zombie. 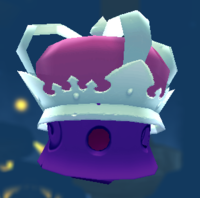 Located in rsrc/item/gear/helm/pith is a strange purple pith helmet with a Royal Jelly crown on top of it.

Calibur's file contains a preset for a Calibur with a frosty blade. The skull-adorned hilt and the form of the blade hints that it may have been an early Cold Iron Carver, but it may have been a separate sword entirely. It, too, has a rendered icon, named "frost_sword".

Located in rsrc/item/weapon/sword/flourish is a Skelly set themed Final Flourish. At face value it appears to reuse the Dread Skelly Shield's texture, but it actually has a completely unique one. Not only that, but its texture is set up to be recolored in-game, similar to a copy of Dread Skelly Shield's model. The Skelly set notably lacks a sword.

Nightblade's model contains textures for what are presumably Iceburst and Fireburst variants, and even an entirely different model designed as a Proto variant.

rsrc/item/weapon/sword/saber contains a single model file of a long, narrow sword similar to Flourish but with a different handguard. It reuses several of Calibur and Brandish's texture variants, including the unused frozen Calibur variant, with their particle effects intact.

Pulsar's files contain a very festive reskin that was almost definitely intended to be released during the 2013 Winterfest event along with the matching reskins Deadly Candy Poker and Nog Blaster, as it appeared in the files alongside them. Strangely, it also received a rendered item icon named "eggnog_blaster", the same name given to one of the other weapons.

Despite the HUD overhaul in 2013, nearly all of the previous HUD's graphics were kept intact, although some of the accompanying interface.dat files were removed. This includes a lot of the original paletted item icons, like the (still) unused lance weapon icon. Never has there been even an implication of a lance to be added to the game.

While nearly every folder in rsrc/item/pickup is completely empty, two of them still contain a single texture: coin_gold and coin_silver, both textures depicting what appear to be early currency. They're both very simple and radically different when compared to the final game's Crowns, and their texture structure indicates that they probably used a model that was removed, if they ever even had one.

Not only does the Vitapod texture contain an unused wing, paired with it in rsrc/item/consumable/vitapod are two unused variants: one purple (icon_5pod) and one yellow (icon_omegapod), both with the unused wings. Even more interestingly, however, the Vitapod model has presets for both of these. The purple one is apparently called a Super Vitapod, and is loaded as three Vitapods grouped together with no number to indicate their effectiveness. The yellow one is an Omega Pod, and comes with both a halo of light and a pair of the unused Vitapod wings. Notably there is another folder in consumables named vitapod_super that is completely empty. 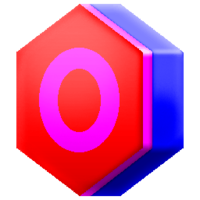 Grouped with the other tokens in rsrc/ui/icon/inventory is a token with a circle on it named icon_token-core, it has been in the files since late 2012 at least. One could assume it has to do with the core, however in what way remains unknown.

A file exists with the prestige icons named prank_006, implying that there was to be a prestige rank beyond the final one, however the icon is blank. 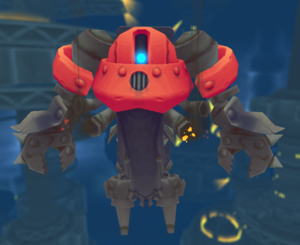 The Collector, the main boss of the Battle Sprite missions, has a texture that shares a color scheme and design with friendly Mecha Knights, implying a possible support version was planned. 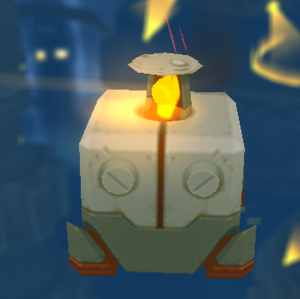 Shufflebots, the inconsequential training enemy located in the training hall of Haven, have an unused texture that resembles a regular enemy more than a knight-created training device. It matches the Scuttlebot's color scheme rather well. 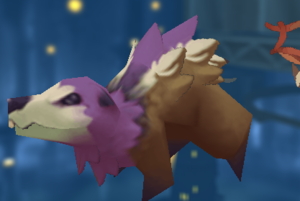 Wolvers possess a texture that removes their tails and makes them resemble badgers, as indicated by the name of the preset in the model. 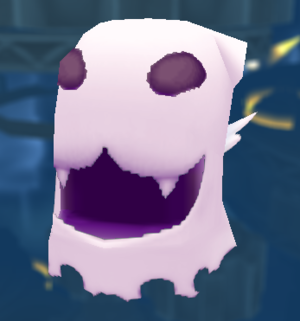 Mewkats, a rare variant of the Spookat enemy, do not enter an attacking state. As a direct result, this aggravated form is never actually seen ingame.

Located in rsrc/world/tileset/dev is a set of run of the mill test level textures and tiles. 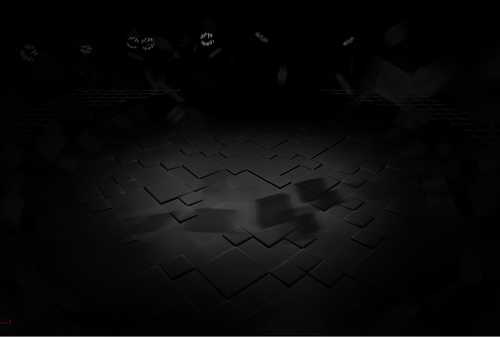 Located in rsrc/world/skybox/consumed is a pretty unsettling skybox, with an entirely black background, a grayscale spinning floor, pages spinning around the area and creatures biting from within the darkness. Thematically it would work well in an event involving the Owlite Keep or the Kat tribe, however it isn't actually a skybox, as it renders itself in the playing field instead of as a background. 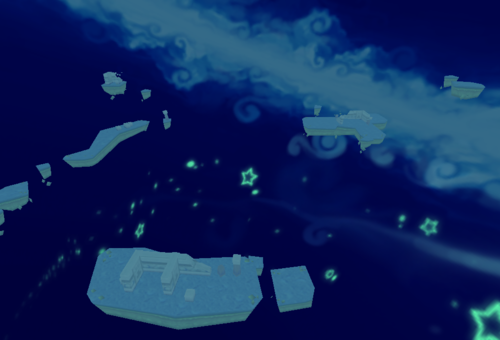 Within rsrc/world/skybox/grass_island_night is a skybox depicting an oddly non-mechanical sky with other sky islands levels floating by in the background. It doesn't render quite right.

rsrc/world/skybox/modelviewer contains a couple of backgrounds that are probably used for a developer's model viewer, however they go unused in the released game.

Located in rsrc/world/skybox/worldmap is an adorable yet enormous miniature of Haven. While Haven itself is made out to be much larger than is ever seen during gameplay, it is about ten percent of the model at best as it mostly consists of large mountains and crevices. The model also has passing clouds, and the complete skybox file applies sunset/night lighting to it. Some settings imply that it was for the rescue camp, and the skybox's placement with Haven in the far northeast would fall in line with that. The model does not reflect the bazaar, or the garrison (which possibly had not existed at the time this was made), and the west entrance to the Arcade is missing. Oddly enough however, there's an entrance to the east that's quite a bit farther out than the actual one.

rsrc/world/skybox/core_approach contains a model named model_hatch_open.dat which is, as one could assume, the core's hatch opened. While it will hopefully be used in the future, it has been in the files for quite a long time, and none of the models have proper animations to show it opening. 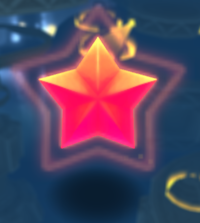 Present in rsrc/item/consumable/star is a rather pretty model of a flashing star with texture variants for different elements. It could be assumed that it was a collectible, but its real use is unknown.

Located in rsrc/world/prop/beast_dens is, fittingly enough, a set of beast den models. While a few of them are just tileset decorations at face value, there's also a separate nest made specifically for the mini mobs found in Compound levels, with a destroyed model as well. The folder itself seems to have appeared in 2013, which would put it in line with the release of Compounds. Even more interestingly though is a set of Chromalisk nests, full of eggs with unique textures for each "breed" of Chromalisk that seems to relate to an unused particle, fx_chroma_egg, that depicts an egg's contents spilling on the ground. This is the only object that the particle could relate to. 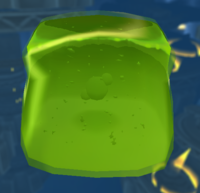 The Jelly Green Giant is essentially a reskinned Royal Jelly with only two of its attacks: tackling and spawning miniature green jellies. It only spawned in one place: a small seemingly optional arena to the left of the elevator in Aurora Isles: The Jelly Farm II. As this particular level was common in the Firefly Gate, a gate present in very early versions meant for new players, the Jelly Green Giant absolutely crushed them, and the arena it was in was walled off, effectively removing it from the game. Its mini jellies, however, still appear in Royal Jelly Palace and occasionally some danger rooms. 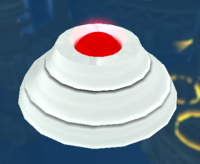 rsrc/character/npc/monster/blastcore contains a temporary Battlepod that's very different in design from the final. It has some of the final's animations but lacks quite a few, and the death animation is a generic enemy death.

Gold versions of Trojans and Gun Puppies exist in the files after having been removed, probably due to being completely invincible. Later, when drones were added, similar golden, also invincible versions of Shankles and Wisps were added.

While not unused, the friendly skull NPC in Firestorm Citadel has the Spookat's animations for moving, biting and dying, implying it was to be an enemy instead. It even contains variants for shock and curse versions, and two models that mimic Lord Vanaduke's mask phases, although this isn't the model that Vanaduke uses. It's known as "reaper" internally.

The curse variant seems to be used for the head of the Phantom, and the Phantom's sounds are named reaper as well, however the skull never uses any of its own animations. 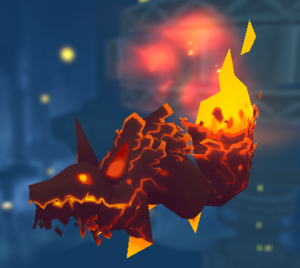 The Wolver model still has a preset for a Vog Cub, an enemy that was only seen in the preview event and the promo video. Now, it's only alluded to through the Vog Cub set of armor.

rsrc/character/npc/monster/mechaknight contains a model named model_giant, it is a Mecha Knight with a large glowing 'eye', a large gear on the back of its head and sparks emitting from its exhaust pipes. There is also an allied variant which is surrounded by a very large bright blue glow. 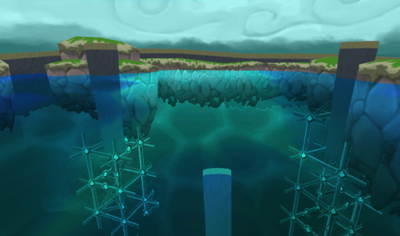 The most notable unused level of late is only implied: added some time in 2013, several tileset and skybox folders exist for an alleged water temple level. It seems to (naturally) have a lot of water, including frozen pools of water that can be walked on (assumed based on a few preset names). The water temple content looks slightly rough and unfinished, and the most polished part (a skybox) was removed from the game's files. Whether it was ever intented to be used or not is debatable.

Located in rsrc/item/consumable is an almost empty folder named food. According to Spiral Knights' head developer Nick Popovich, Spiral Knights was once intended to have food items that would lure enemies. The food was to work like normal items, it would be held above a knight's head and different food items would attract different species. This was cut mostly due to dominant strategy, as it was thought that nobody would use food when flat out fighting is faster.