These strings are similar to other games by Magic Pockets. Notably, the European version was compiled two months before the original PlayStation 2 version was released.

Also of note is that all three strings use the game's original title of "Halloween".

Present in all versions are a set of four JPEG-format images that are never used in-game. It is not known if there is any code that would cause the game to display these images.

The first picture has クレモン (KUREMON) written in Katakana. Based on the game's credits and other hidden images from F1 2002, it may be Clément Cordé, an in-house programmer.

For whatever reason, only 21 of the game's 25 images can be extracted from the European version. The ones that cannot be extracted are the first three hidden images and, oddly, the menu background.

While these graphics are used, they can't be seen in full normally. The mountain background has a hidden portion that looks like the sky background.

The US and Japanese versions have their respective publisher's logo before the Wanadoo and Magic Pockets logos.

The Japanese version updated the copyright date on the Wanadoo logo. 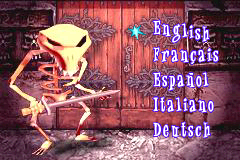 The European version has a language select screen that is completely absent from the US and Japanese ones, which only have English or Japanese text respectively. While the background image is present in all versions of the game, only the European version uses it.

Aside from the logo changes, the Japanese version adds a sprite for its subtitle. This sprite is completely static, unlike the main title which has a scaling effect.

Load Game and Options switched places in the Japanese version.

The European and American versions use a password system for recording progress. The Japanese version changed this to a battery save. 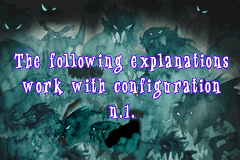 The above screen is only present in the European and American versions.

The cutscene text slowly appears and disappears in the European version. The other releases sped this up considerably.

Scrolling the text is much faster in the US version. It also avoids the minor graphical glitches in the font that are present in the other releases.

Mahou no Pumpkin replaces the Sparks with Crystals to match the console version.

The Japanese version replaces the Normal mode with Easy/Beginner, where you start with 5 lives instead of 2 and the levels have fewer enemies.

"The Doorway to the World of the Dead" has a slightly different starting position in the Japanese version. 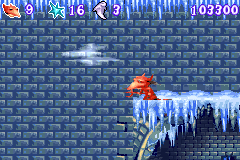 "The Frozen Crypts" has a wall you can go through in the European version. This isn't possible in the other releases.

One platform in "The Tall Tower" has a missing tile in the European version.