Harry Potter and the Goblet of Fire (Game Boy Advance) 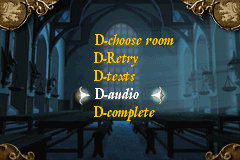 With the U.S. version, enter the following code on an Action Replay Version 3:

Then, pause the game and press L and R. The cursor will be brought one space below all the visible options. Simply scroll downwards to get to the game's many debugging options. This Action Replay code can be input through GameShark as well.

While there are other options after these, they are more or less other text strings from the game.

This is a level in the level select menu. Upon selection, the game brings you to the Yule Ball game. The game then hangs at the Yule Ball background image. The pause menu is still accessible.

Within the block of text for spell names there are two unused strings.

Arresto Momento is a spell used in other Harry Potter games. It is used to slow down the speed of objects or people. This spell is completely unused. There may be graphics for it still within the ROM.

There are secondary versions of almost all the spells in the game, including the unused Arresto Momento spell. Expelliarmus has no upgraded version.

These strings appear right after a "minigames" string in the texts log. They refer to some mini-games that remained exclusive to the Nintendo DS version, which was developed by the same company. 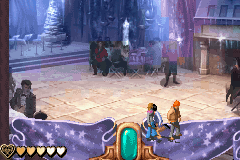 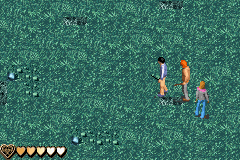 A test room for Level 8. This room is about 3x3 screens in size. It's a large empty space with a grassy flooring.