Harry Potter and the Prisoner of Azkaban (Game Boy Advance)

Harry Potter and the Prisoner of Azkaban seems to be based off its Game Boy Color predecessor, including some unused data from that game. 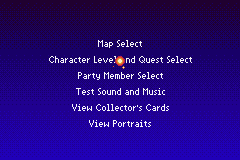 Pressing the B button on the main debug menu will return to the title screen. 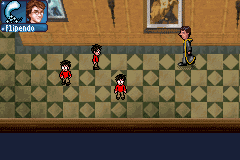 There are some error messages starting at hex address 0x60555.

There are build dates hidden in the game at 0x06BFC4 in the US version and at 0x06BF34 in the Japanese version.

Five maps make up the test room. They are titled Diagon Alley Test Map 1 through 5. These maps can be accessed through the Map Select function of the debug menu. Despite the name, there are no features of Diagon Alley in the levels. These maps are linked horizontally and in numerical order. Each room has unique sprites. Any sprites with walking animations walk in a continuous loop. The encounters vary by room, many of them being bosses. Interestingly, the HP of the bosses is displayed as its actual value, while in game boss HP is displayed as being unknown.

In this minigame, Harry has to play a version of the arcade game Tapper (but he serves Pumpkin Juice instead of Budweiser). The sprites for the "customers" are randomized every time the minigame is started. The customers will move towards Harry slowly. Once a sprite reaches the end of the table, it's game over. Controls: Use Up/Down to move between the three tables. Press A to fill and slide a glass of Pumpkin Juice along the current table. There is no function for receiving Pumpkin Juice, so the glass slides past the sprites and falls to the ground. This results in a YOU LOSE notification. Pressing the L button at any time brings Harry to the center table, where he drinks a glass of Pumpkin Juice and throws the empty glass on the ground, giving Harry 400 points. This results in a LEVEL PASSED notification. 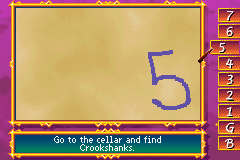 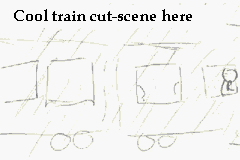 For more, see the notes for this game.

The characters were intended to have multiple portraits, to explain their emotions during their dialogues like in the GBC games.