Suikoden is one of Konami's early attempts at an RPG, and the start of a long and fairly popular RPG series spanning five games in the main series, and several side-games. Based loosely on a Chinese folk tale, it's a story of a young man named Tir McDohl who, after being exiled from his home, forms an army and battles the repressive Scarlet Moon Empire.

A tad rough around the edges, but an enjoyable RPG experience. 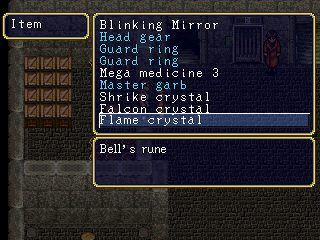 There are three Rune crystals that can never actually be obtained.

As characters' weapons are strengthened, their names will change at predetermined levels, with each weapon having three names total. However, many characters join with a weapon "pre-upgraded" into the second or third name change group, preventing you from ever seeing their initial weapon title.

(Note: Ted and Odessa have the same exact weapon, which is why they're lumped together. Technically, you never see Odessa's "original" weapon as her weapon starts a level too high, but it's the same as Ted's, the Steel Bow.)

It's worth pointing out that because these names are never seen, there are two weapon name themes that go unnoticed in-game.

The first is that Clive's weapons all have a wind naming scheme: Wind/Storm/Tornado. The second, and more interesting, is that Warren's weapons all refer to the Norse God Odin. His third weapon is just "Odin", while his first two weapons are mistranslations of Sleipnir (Odin's horse) and Gungnir (Odin's spear).

Also interestingly, many of these weapon names are repeated throughout the series... and continue to go unused, as the characters wielding them always start with their weapons at elevated levels. In particular, Futch's first weapon Verserk is (un)seen again when he reappears in Suikoden II and is later passed on to Sharon in Suikoden III... where it's still never seen! Several other weapons got the same treatment.