The N64 Superman is an example of what happens when a license holder orders an insane amount of changes during a game's development, forcing the developers to scrap most of the work they had done up to that point. It's bad. Not only that, you mostly fly through rings for most of the game instead of saving people. 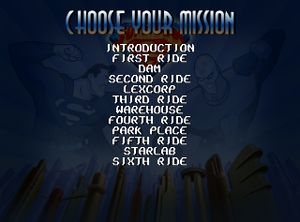 Play the game until it lets you save, then reset the console and load the game. When the Rumble Pak message is on-screen, hold L + B for about a second and press A.