I might be remembering it wrong but I don't think I remember a bit in the opening movie where Sonic sneezed. Sprites are fine though. MightyKombat 01:33, 10 May 2012 (EDT)

I have an interesting theory regarding these sprites. You know those moth-like enemies that flit about, dropping sparkly clouds of pollen/dust/whatever? You know how the sparkly stuff doesn't do anything? I bet at one point in development, if Sonic touched one of these clouds, he would stop dead in his tracks and sneeze. Not a deadly trap, but it would make him more vulnerable to attack for a brief moment. Maybe it was dropped because it was simply too annoying? --BMF54123 02:57, 26 June 2012 (EDT)

That makes a lot of sense. I like that. MightyKombat 04:20, 26 June 2012 (EDT)
Indeed, could it even be possible to just try that out in the final? Just leave Sonic still and have him exposed to the sparkly stuff those moths drop. Someone should check! OKeijiDragon 04:25, 26 June 2012 (EDT)

I've got the 2011 remake, the Gems Collection one on PS2 (I live in the UK) and I can easily grab an emulator and try it out on teh original Sega CD version. And as the latest edit says yeah Sonic's more skidding to a halt when he sees the Little Planet. The way his head moves resembles sneezing but isn't that. MightyKombat 04:33, 26 June 2012 (EDT)

Are these appropriate for the page? They're leftover sprites from a level scrapped early in development. They match up to some concept art shown in this developer diary and the Antlion enemy appears in the ending movie. Syntaxlies 19:24, 27 March 2013 (EDT)

They aren't in the game data anymore, no, as they more than likely would have been found already, but don't they still qualify as cut content? Syntaxlies 17:14, 28 March 2013 (EDT)

I believe that the CX in Quartz Quadrant's ACT 1 are the initials that the designer of QQ put in the stage to be a sort of Easter Egg. I believe this because if you enter the code Right, Right Up, Up, Down and C on the Title Screen you are taken to the Game designers best times for Time Attack mode(shown below); Which includes a designer with the initials "CXX" 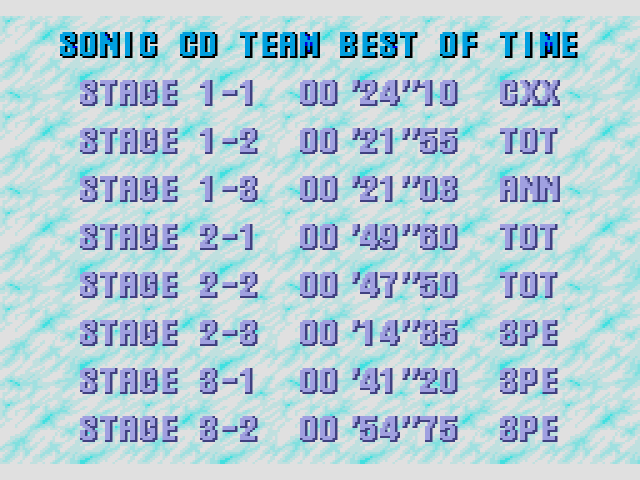 "CXX" is Masato Nishimura (Majin). He's credited as "CXXMAJIN" in the game Dark Wizard. Incidentally, 3PE is Masahiro Sanpei (3pei), and TOT is probably Yasushi Yamaguchi (Judy Totoya). Not sure who ANN is though (Akira Nishino?). --Djsquarewave (talk) 16:20, 20 July 2017 (EDT)

Creepy sound test may be a misunderstanding

I believe the screen was a "good luck charm", like the Japanese version. The pointers are the same between the versions, but the songs are in a different order. This suggests that the easter egg was not updated in time to make the US release. So, yeah... — The preceding unsigned comment was added by C lector (talk) • (contribs)

Unused Amy with hearts in eyes?

I'm kinda confused about something. If the bunch of unused sprites of Amy were said to have hearts in her eyes, how come the given picture has them scribbled over with something else? I don't know if this is a mistake or if I am mistaken. Also, I personally like the last sprite ^_^ -Sultanofswag89 19:46, 16 September 2017 (EDT)

The origin of that rip comes from Secrets of Sonic Team and is fairly old. It's the best rip I could find and in turn, that's how Sonic Retro got its rip. --From: divingkataetheweirdo (talk) 20:00, 16 September 2017 (EDT)

There is a note along with it under the sound test/debug mode section that claims it may be a form of copy protection, but I'm fairly certain this is just a rumor someone made up. The Sega CD itself had no implemented copy protection, so having only a single instance of copy protection would be pretty weird. The supposed method for this screen to load instead of the game is also a bit unorthodox as well- most copy protection at this time was limited to copy-proof manuals containing some bit of information needed to access the game, and nothing that would actually alter a game's startup off the mark. I've browsed around on some forms, and I haven't found a case of anyone supposedly coming across this screen using a pirated copy of the game. This screen isn't encountered when emulating using a disc image (Much like how a pirated CD-R would) either; so it seems like this screen isn't a creepy form of copy protection (Though, it'd certainly be effective- imagine a kid booting up a pirated copy and being greeted with that), but a creepy secret inclusion to the game.

The description of the unused sprite of Sonic being electrocuted says that it's used in the 2011 remake, which isn't true as far as I'm aware, at least on the Steam port. None of the sheets for Sonic or Wacky Workbench have the sprites on them, and getting hit by the coils as a test just damaged Sonic normally.

I'd add these to the page, but I don't want to do it just yet without confirmation. I've been looking at some Sonic CD sprite sheets recently, and caught my attention of certain angled rolling sprites. Playing myself, I could never see these sprites used in-game, instead sonic goes straight from his normal sprites to the "front-view" sprites (video provided). Is there some sort of special situation where these sprites are used? - MCTravisYT (talk) 01:06, 24 May 2021 (UTC)

From Palmtree Panic Zone 1's half-loop(?), it seems those sprites are actually used if you tried rolling up and down without touching the levitating windmill - Zaycool97

As in the video provided, the sprites I've shown don't seem to show up and instead snap to the front/back facing sprites. The running sprites work fine with all of them being used. -MCTravisYT (talk) 18:24, 25 May 2021 (UTC)