Sonic CD is just your average Sonic the Hedgehog game on a CD... that's what you're told, anyway. 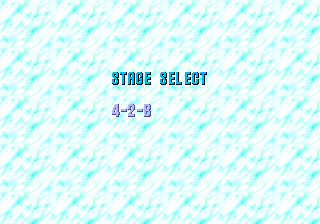 Press Up, Down, Down, Left, Right, B at the title screen. Note that you will be taken back to the title screen upon completion of the selected level or upon attempting time travel. If the level was ended by attempted time travel, entering the Level Select again and choosing another level will start the level as if you had traveled through time, keeping any rings and accumulated time from the last level.

The level select screen skips from level 1 to level 3. Level 2 was also missing in the PC version, known as R2 because of the way the PC version stored the levels in R# folders. For a specific version of the level: A is the Present version, B is the Past, C is the Good Future, and D is the Bad Future. 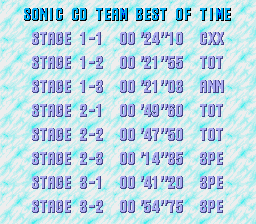 Press Right, Right, Up, Up, Down, C at the title screen to see the best times that the team behind Sonic CD got in Time Attack mode for each stage and act. High-Speed Shoes music plays in the background. Possible developers and their common nicknames are as follows:

At the title screen, press Down, Down, Down, Left, Right, A to go to the sound test. By entering the following codes, you can get the corresponding image, debug mode, and/or extra after pressing Start.

There are some monitors that aren't used in the final game but are used in some of the prototypes. The player can access the monitors in all major releases of the game from the Debug Mode. The S and Clock monitors can also be used in Palmtree Panic Act 3, using debug to place Sonic in a secret room located underneath the boss arena.

This sound effect is odd in that it's a CD audio track on the disc. When the game disc is inserted into a CD player, one can hear this sound on track #2, with iTunes and other CD players labelling the track as "Metal Sonic". The v0.51 and 712 prototypes used this sound for time travel.

This screen, which features a scrolling banner saying "COMIN' SOON" while playing the invincibility theme, was used as far back as the v0.02 prototype when only two levels in the prototype were accessible and used for subsequent prototypes after clearing certain Rounds. It managed to survive all the way into the final game and can be viewed by selecting "COMMING" in the Level Select.

Almost the entire soundtrack was redone for the American version by Spencer Nilsen because Sega of America thought the soundtrack of the Japanese and European versions sounded too identical to the electronic dance soundtracks being produced at the time, so the American soundtrack has more of a rock feel. One example of this is the theme song: instead of "You Can Do Anything", the American version has "Sonic Boom". The only songs that weren't altered were the Past themes since those were played through the PCM chip and not Redbook.

In addition, there are a few other differences in the American version compared to the original Japanese and European games:

All of these changes are applied to all regional versions of the PC version, though the 2011 re-release reverts the Metal Sonic racing theme so it always plays Stardust Speedway "B" Mix and mostly restores the original ending videos' exclusive audio when played with the Japanese soundtrack.