The Last of Us

The Last of Us is a universally acclaimed Uncharted-like third-person action-adventure game starring Joel, a smuggler tasked with escorting a teenage girl, Ellie, across a post-apocalyptic United States in a journey to defend themselves against hostile humans and cannibalistic creatures infected by a mutated strain of the Cordyceps fungus.

To enable this, you'll need a Jailbroken PS3 (Custom Firmware) or a Homebrew enabled (HEN) PS3 with Version 1.00 or 1.11 of the game (with region BCES01584/BCES01585). Attempting to enable the menu on the BCUS98174 version will load the FPS counter, but the Debug menu will not show up, either due to the necessary files being absent from this version, or the correct values being unknown.

The files debug-menu.bin and debug-menu.dci, which can be found in bin.psarc\dc1, are not used for the Dev Menu. They can be deleted without the game crashing, which means they are never called by script-manager.cpp.

After you enable the debug menu, you'll see the FPS text at the top-right of the screen. Press L3 + Start to open the Dev Menu, L3 + Select for the Quick Menu, or L3 + R3 for Debug Fly (player will need to be spawned in a level to use this). The Net... and Profile... Sub-menus are empty.

The Memory section is only useful when connected with the ProDG Debugger via TMAPI (ProDG Target Manager), and with quite a bit of experience modding the PS3 version of the game. 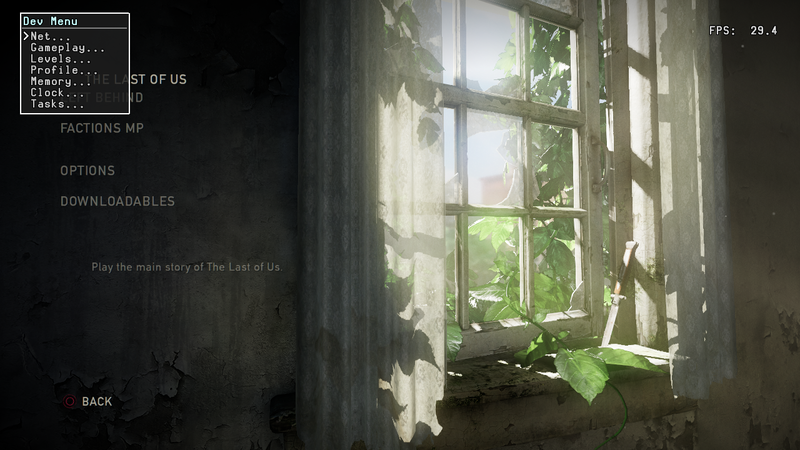 Clock allows you to change the game's speed. 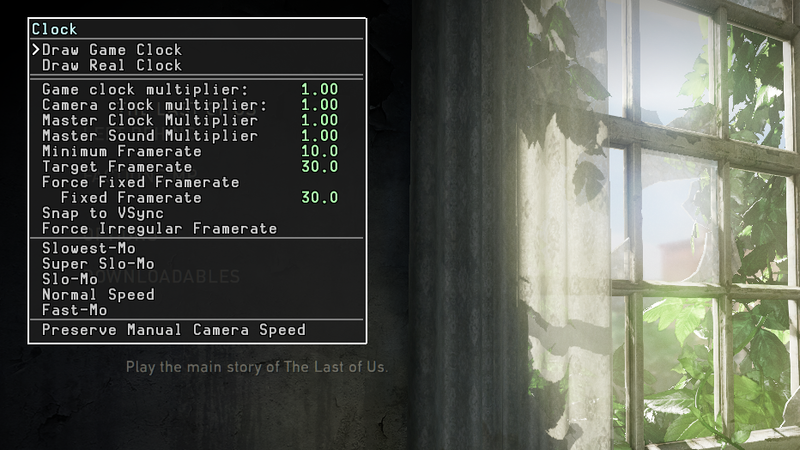 Tasks allows you to choose any task or cutscene you want to play in both the single-player campaign and DLC chapters. Attempting to load a DLC task without DLC installed will crash the game. 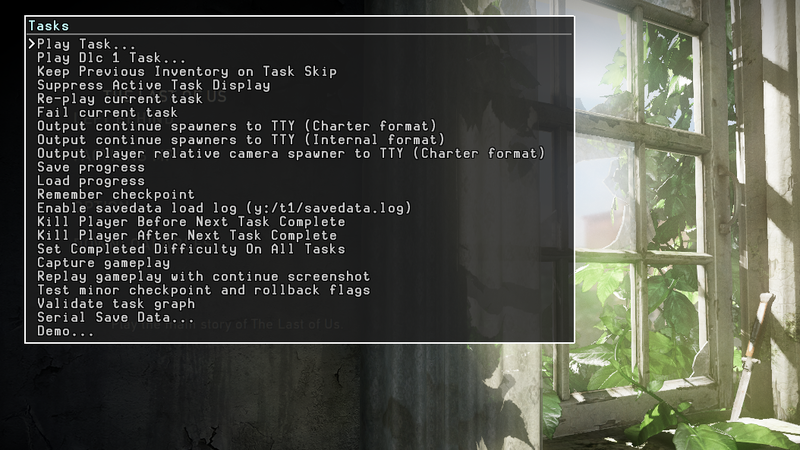 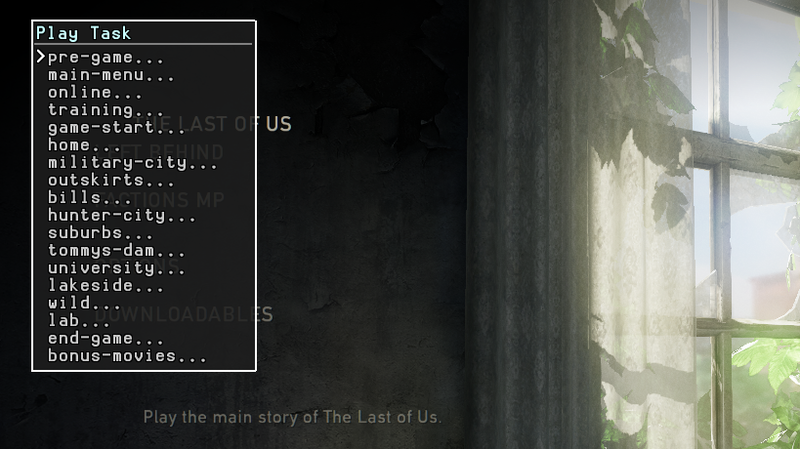 The Tasks list has every notable point in the game broken down, with larger sections having their own sub-menus such as bookstore fight or Lab fight. Options with sub-menus are shown with "..." at the end of the name. 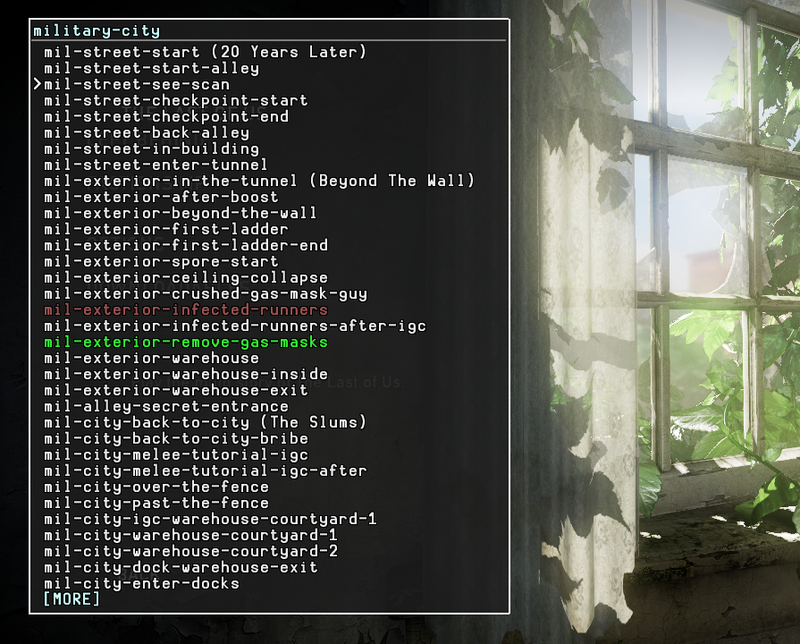 This has some additional options such as Infinite Ammo, Invincible Player, No Reload, and Selective Background which is used to hide assets in-game. Once enabled, press X to select the object you're looking at and O to hide/show it. There will not be any text on the screen for guidance as Debug Text has been stripped from the retail eboot.bin. Hiding an asset does not delete and unload it, only stops rendering it. The "Give Player Weapon..." sub-menu is, hilariously enough, only useful for removing all weapons from the player. Attempting to select one of the blank spaces where the weapons are supposed to show up will crash the game.

Joypad Scheme 1 and 2 seem to do nothing. 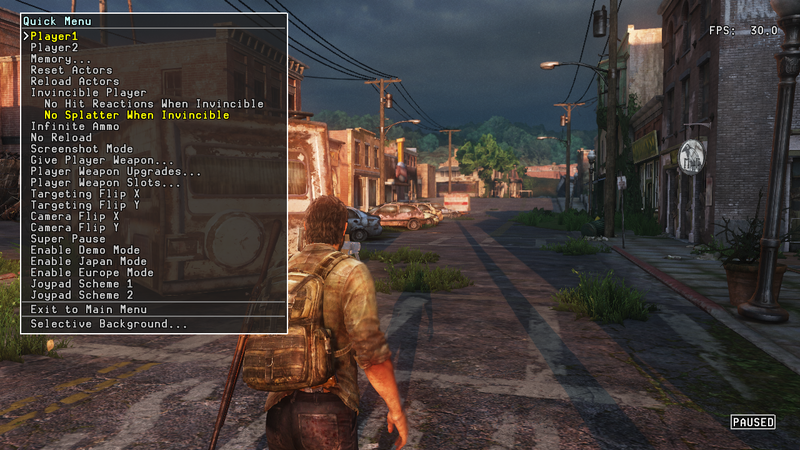 There are some secret debug rooms/test maps that can only be accessed with the Debug Menu or by a save file that can be found here. These maps were created by the developers so they can test the gameplay's mechanics, combat sequences, and NPC AI. 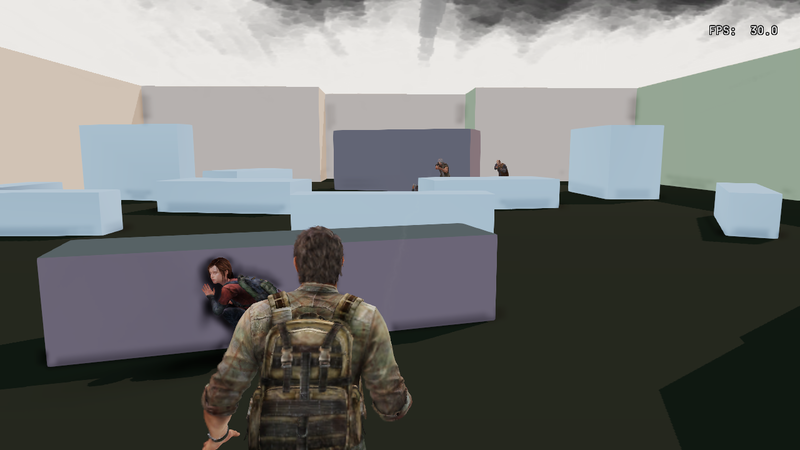 The player will need to press L3 + R3 for Debug Fly to get to all of the rooms or use the Tasks menu to skip to the ones that work. Any that involve equipment will not be possible to complete due to the required assets not being loaded into the level. 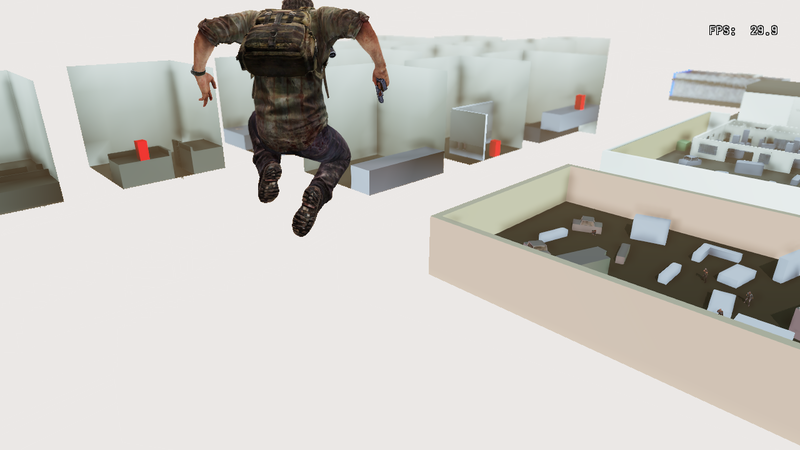 You can access these rooms by the Tasks option in the Dev Menu: Tasks > Play Task > training). 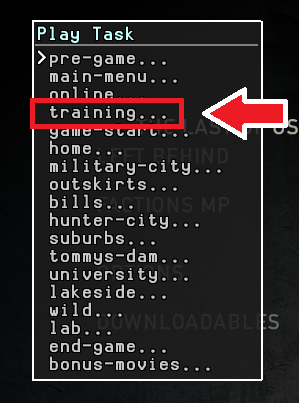 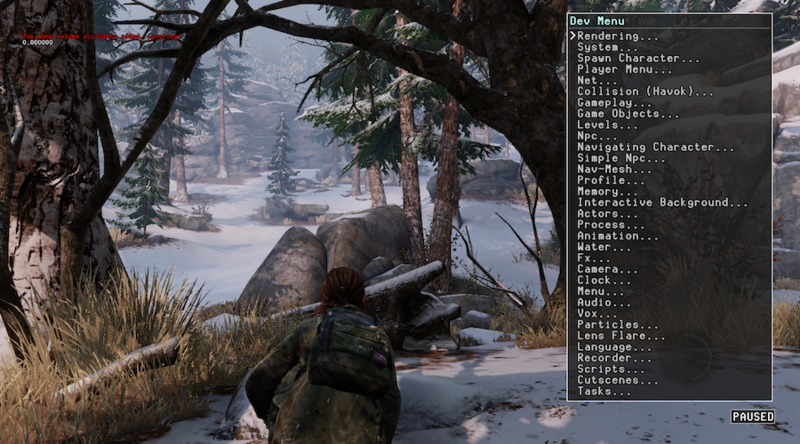 This is the full development Debug Menu similar to the current menu. This is not in the retail eboot.bin, to access it, the Dev eboot.bin would need to be released. Uncharted 1 and 2 have the full menu in their retail eboot.bin's, which can be seen here (Dev Kit required to access).

Memory Edit the below address to enable the engine features.

Normally, leaving the playable area causes the level geometry to stop rendering. This setting allows geometry to be rendered outside of the designated zone, which causes a drop of ~5 FPS.

The Frame lock setting has been set to 06 in memory.

Splitscreen is possible in single-player, but it is very unstable. Expect performance improvements if the full debug eboot is released. 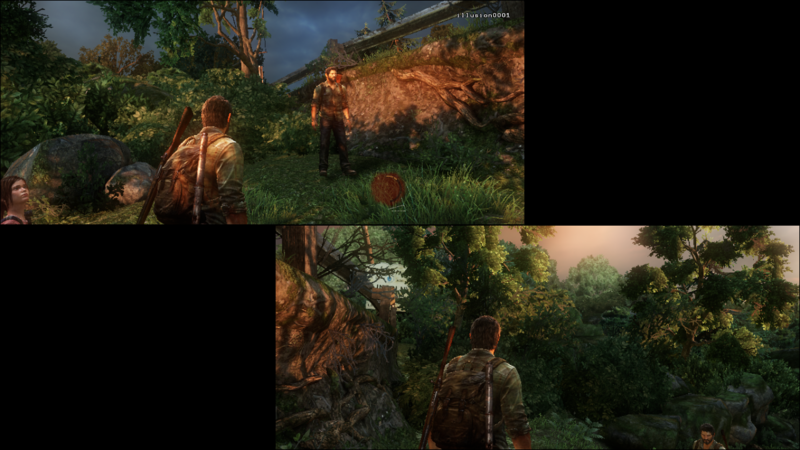 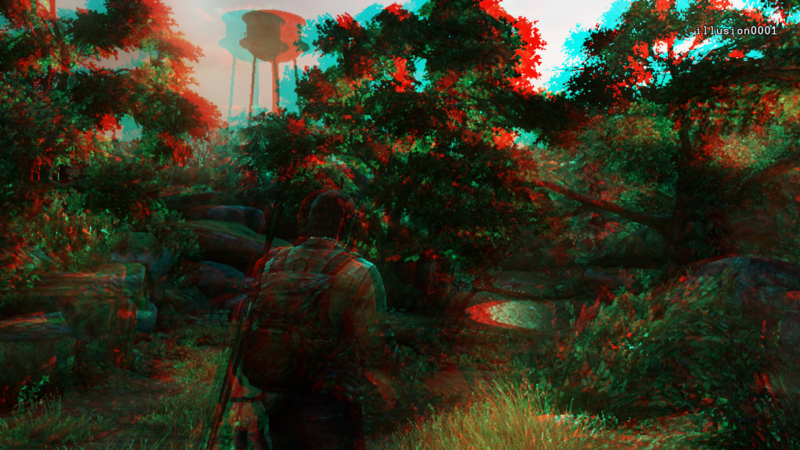 This section lists other engine features that have been stripped from the retail debug menu but do still work in-game. They will need to be enabled with memory editing. The addresses listed will only work on v1.00.

No Description, but the game remains functional.
Address: 14C7C38

Render Shadow Occluders - This option also is partially broken from stripped debug utilities. The player's body and some level geometry is not rendered despite being shadow occluders.

In the full menu, this option would cycle through multiple render modes for viewing specific aspects of the game's levels. These can be seen in the Uncharted 2 breakdown here. All that is left is a minor change from baked shadows to dynamic shadows, which leaves shadow ghosting effects.

This video goes over some of the version differences, mostly censorship; most of these changes are covered by either "Enable Japan Mode" (for single player) or "Enable Europe Mode" (for Factions) Quick Menu settings described above.