Streets of LA is the first game in the short lived True Crime series, which only lasted two games. 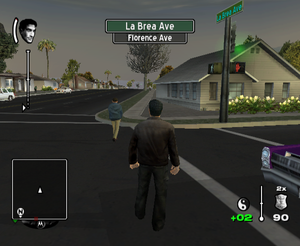 An intersection in Inglewood, accessed using a glitch. 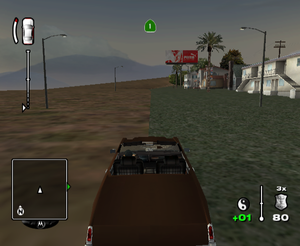 A few of the street props and houses left over from the removal of Topanga Canyon Boulevard west of Pacific Palisades.

Due to deadlines, numerous areas of the map had to be cut from the game, notably Los Angeles International Airport, Griffith Park, the University of California-Los Angeles campus, El Segundo, Inglewood, South Los Angeles, Florence-Graham, Huntington Park, Glendale, Studio City, and Encino Hills, among others. Attempting to enter those areas will result in the flashing of a white screen as the player is teleported back to where they originated. If the player manages to remove the white-screen barrier through modifications or glitching and get out of bounds, however, plenty of leftovers remain: 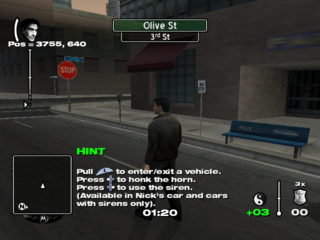 To enable the coordinate display in the console versions, go to the map screen and press X, Circle, Square, Triangle on PlayStation 2, Y, X, Y, Y on GameCube, or A, B, X, Y on Xbox.

The Japanese version features fully translated text as well as dubbed cutscenes, which is unusual in the latter's case as other similar games just kept the original English voices. Strangely, the actual in-game speech, such as Nick's quips or the radio dispatch, are the original English voices. This can be somewhat jarring when going from cutscenes to actual gameplay. The names of the episodes and missions are also in English, but some were renamed, such as the mission "Strip Club Detour" getting renamed to "Show Pub Detour" to avoid any overly sexually arousing naming.

This version also features a small edit in the intro cutscene for the episode 5 mission "On the Chopping Block", where Nick chops off the finger of one of the butchers. In all other versions, the chopped finger is seen falling on the counter. However, the Japanese version doesn't show that since that falls under CERO's ban of extreme bodily mutilation.

The GameCube version removes a large chunk of the game's soundtrack, and what remains can become repetitive during gameplay. Conversely, the PC version expands the soundtrack with rock songs not featured in the console versions.