From The Cutting Room Floor
< Undertale
Jump to navigation Jump to search
This page contains changes which are not marked for translation.
Other languages:
English • ‎한국어

Undertale has a number of unused rooms, ranging from simple testing rooms, to just plain creepy stuff. Most of these rooms require Debug Mode to be enabled, otherwise the Annoying Dog error screen will appear.

A room that is between room_water_farm and room_water_shop. Its name suggests that Toby Fox may have planned to place it between room_water_friendlyhub and room_water_bird. The room has a thin stretch of land surrounded by water on two sides. Grass covers the path, and the protagonist can talk to two NPCs hidden within it. One NPC remarks that they love to catch bugs in their spare time, and the other one asks the protagonist to do something about their friend, who the NPC says has a creepy smile. If the protagonist speaks to the second NPC again, the NPC asks where their friend went. Exiting the area on the left crashes the game, and exiting to the right softlocks the game at a black screen. This could be the bug catching spot Toriel mentions when talking to her in her home.

The room displays a message in the Wingdings font, while the sound ''mus_smile'' (a chopped and screwed variant of Muffet's laugh, slowed down to resemble a dial-up modem) is played; the text's associated voice grunting consists of random snippets from abc_123_a.ogg. The decoded message reads:

A room that displays several sprites of the enemy Froggit before drowning the entire screen in red.

In-game, the word "smell" is displayed in red text. In at least earlier versions of the game, the first line can occasionally appear elsewhere due to a glitch.

Interestingly, the first line would be quoted almost verbatim in the Check text for Spamton NEO's regular fight in the later released Deltarune, only with "smell" being replaced with "taste" and the red coloring being given to the word "pain".

It should be noted that the text is not correctly formatted for the boxes, as the left text goes out of the right side of the box, and the middle text goes straight down out of the box. 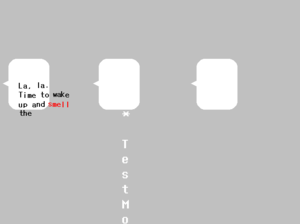 An empty, black room with nothing but an NPC in the center. Speaking to the NPC shows the following dialogue in the Wingdings font:

Leaving the room will lead to the "Sound Test" room. 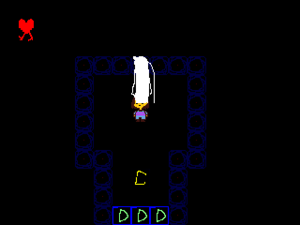 A room that uses many of Waterfall's overworld assets, presumably for testing. 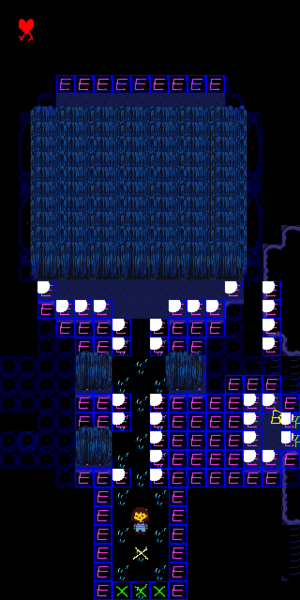 A black room with strange NPCs that move around the room. The NPCs appear to be falling lava streams with faces. This room also has collision boxes, a Flowey dialogue trigger, and a door to room_overworld_3, which is mostly just black space. The Flowey dialogue triggers a battle transition and a botched Toriel dialogue box. The player is then able to move the SOUL around freely. The Game Over theme, "Determination", plays in the background, but triggering Flowey's dialogue will cause "Your Best Friend" to overlap the music. 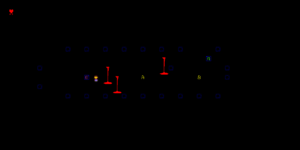 A battle against a Froggit that seems to be used to test the bullets sent by enemies in the game. The SOUL also seems to have a strange red and green ray/light effect emitting off of it. Many pellets will spawn at the bottom of the screen before rising up to the top. The game will crash shortly after. 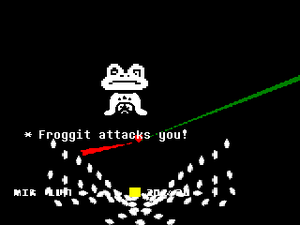 A grey room that was obviously used to check the sprites used in-game. The game will display every single sprite in the game in rapid succession. Strangely, a sprite for the head of Undyne the Undying loads on the screen, but never changes, moves, or disappears. Pressing Space while in Debug Mode allows the player to change to the next room.

A room that was presumably meant to be used as an area for Hotland. The room even plays the Hotland overworld theme, "Another Medium". However, the room seems to use floor assets from Waterfall. The room also contains direction vents that carry the player to the right. These vents were probably used for testing purposes. This room cannot be accessed unless "flag 367" is disabled. Otherwise, the game will crash.

Another room that tests assets exclusive to Hotland, while still using some of Waterfall's assets. The room contains a wave-shaped conveyor belt path that leads to another section of floor. Falling off the conveyor will take the player to room_fire10A_old.

This room contains a wide, straight conveyor belt path leading to the right and a bowl of dry dog food. Along with these are an Echo Flower next to the conveyor path, and a door on the other side that takes the player back up to room_fire10_old. Interacting with the Echo Flower will only write "Error!"

A room that appears to be used to test assets in Snowdin. The room is filled with tiles of ice and snow.

A simple, non-detailed purple room with a pedestal actor that dispenses Rock Candy, an item which can't be obtained anywhere else. Given the room's layout and name, it's likely this room was replaced with the Spider Bake Sale after Muffet was implemented into the game (apparently, rather early on). 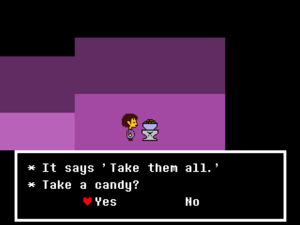 A room that uses Snowdin's assets and contains a unique snowball object that can be made larger by rolling it, unlike the one that is used in-game. Presumably used for testing the snowball physics. 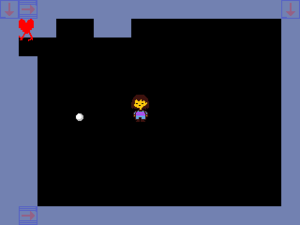 An old version of room_water7. This room appears to use many assets from Waterfall such as lanterns, an Echo Flower, and... well... water. Among these though, are a few odd entities that also appear. There are poorly-drawn torches that are lit up and make a sound effect when interacted with, similar to the mushrooms found in Waterfall. Lighting all the torches triggers an invisible path with poorly-drawn guiding lights. Judging by the low quality of these entities, it's likely that these were either used as placeholders, or for testing purposes. The sign on the north wall has no dialogue assigned to it, so it will do nothing except create a text box that immediately closes.

An older version of the room where the player is introduced to Undyne for the first time. However, there are certain Waterfall assets scattered around. There's even the bunny guy and devil NPCs from Snowdin in the room. The player can talk to these as normal. Walking further right into the boards triggers the final version of the cutscene where the player first meets Undyne. An early version of said cutscene (named obj_undyne1_old) exists, which fits in this room (shown below). 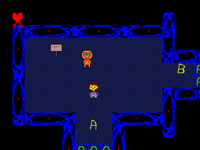 A small room that uses Waterfall's assets. The only entities in the room are a crystal and an NPC that uses unique dialogue. When talked to, the NPC states:

Presumably the dancing mushroom in Temmie village was originally planned to be used here.

A black room with a Memoryhead enemy that disappears. Likely used to test the alignment distortion used for that enemy.