Baba is You is a very creative puzzle game where you rewrite the rules to win. 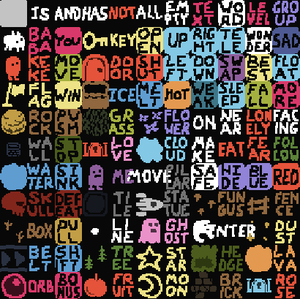 Most objects in the game in an editor menu. You can click one and place it anywhere in the editor screen. “Move” and “enter” are lined up differently than normal.

First, go to the "old-editor" branch in Steam's beta builds. After you've done that, Go to Baba Is You/Data and open syntax.lua, then add the below line above the first end of the file:

The level editor is a little buggy, but works just fine. It can also be accessed by pressing Ctrl + E on the title screen, even without adding the debug line above, or pressing F3 in-game (to toggle between in-game and editor).

This editor has been reworked for a public release, now playable in the main and beta branches of the game. 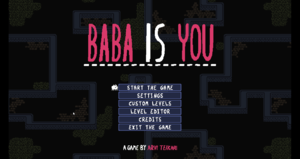 When code is modified to re-enable the level editor, the title screen should look like this. 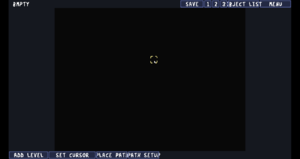 Crash is a property inaccessible in the level editor's object tab as of now, nor is it accessible in the old version of the editor mentioned above. The only way to access it normally is to edit the .ld file of a level, as well as making the same change in the .tmp file, as it will usually just restore edits that are not made to both the files. It has no in-game sprite by default. Note that attempting to rename a object to "text_crash" with the ingame object editor will not work, as the editor will just change it to its previous name.

When Crash is applied to any object the Infinite Loop screen will appear, requiring the level to be restarted or the last action to be undone.

Anni has a full set of walking and sleeping sprites, despite the fact that she is completely stationary in the only level she appears in. All but the first set of right and down facing sprites were removed in a later update.

A strange leftover text sprite that was added (and subsequently removed) in the beta branches of the game. According to the developer (Hempuli), this was for a gif he made for another person, but he accidentally left it in-game.

Two unused property sprites. These were probably scrapped in favor of adding the YOU2 property to the game instead.

A property sprite seen only in a post by the Baba is You Twitter account on November 1, 2020. Despite this, it's still present in the game's files.