In the Japanese version, a large '91 is stored with the title screen graphics, suggesting it was going to be part of the game's title. It is styled similarly to the one used in the previous game, Moe-Pro! '90: Kandou Hen. 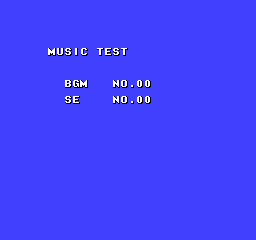 This code is unlockable and given to you in the ending credits screents by 'TAKE-1" programmer. See section below.

All of the music from Bases Loaded 3 is still in the game. Use the patch code 829B:??:24 to hear the unused music on the title screen, with ?? replaced with a hex number between 1C and 22.

In the North American release of Bases Loaded 4, after you complete the game, you are treated to a one-screen ending. However, when you beat the Japanese version, Moe-Pro! Saikyou Hen, you get the same ending screen, but there are game credits following. There are five screens, each with pictures of the developers and their own quotes. This is similar to Rambo for the NES, which had credits in its Japanese release, but were taken out of its US release.

Tatsuya is an alias for Tatsuya Nishimura, who left Tose shortly after the development of this game to work for Capcom. S.M is Satoshi Matsushita, who worked on several other Tose games. Some of these developers would return in Super Bases Loaded. However in that game, both versions have credits with quotations, but the staff pictures are absent.

The programmer "TAKE-1" is referring to the sound test cheat code that can be done on the game's title screen (see above).