The story of a young boy chasing his radioactive pet frog into the depths of the earth, where he finds an ancient battle tank.

Game Genie code XTVYGGAV (EKNYUYAA for the Japanese version) activates a stage select. There's two different "sets" of places to go: one starts you off in a particular world with the tank, and the other starts you off right before the boss.

In the Japanese version (MetaFight), the stage select itself works fine, but in the US version, some things were altered so it turned into more of a demo viewer than anything, unfortunately.

In the European version, the codes AASTKETG + AOVTKEAA activate a stage select screen that works. (AASTKETG alone only allows you to start at the beginning of each world.)

In MetaFight, using the stage select code EKNYUYAA allows you to pause and teleport to wherever you wish. Start returns to the game.

Subscreen and item graphics for an unused Spike item, which was to be acquired in Area 8. It is guessed that this item would have been dropped by the penultimate boss upon defeat, and made the pilot and/or the tank immune to spikes (many of which appear there). Though a hack of this game uses that ability, it was not in the original code.

If this were actually true, then it is also possible that:

The item graphics would later be used for the Wall items in Blaster Master: Enemy Below. Additionally, an upgrade with the above function would appear in Blaster Master Overdrive for WiiWare, where it was known as the Super Tires.

A pointer for the "SPIKE" text tilemap still exists in the subscreen data, and is actually loaded by the screen drawing code if the corresponding bit is set in the tank upgrade flags (bit 6 of RAM address $99); however, the tilemap itself was removed and replaced with a single $80.

An unused set of tiles for an English "MetaFight" logo, possibly meant to be used on the title screen. Unfortunately, no tilemap data remains in either the Japanese or international ROMs.

There are some unused tiles along side the graphics used in the Pause Screen. Below is a mock-up of how they might have been used.

Ultra Sub Blocks[1] that are not used by any Sub Block: 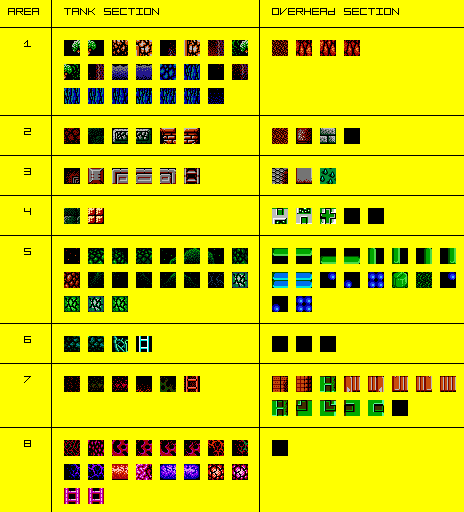 Sub Blocks that are not used by any Block: 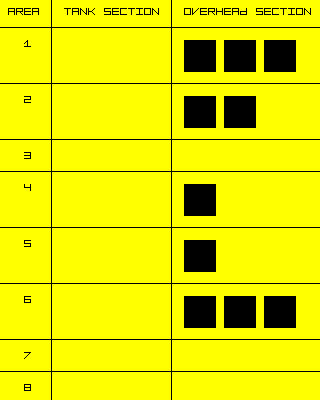 Blocks that are not used in the Map data: 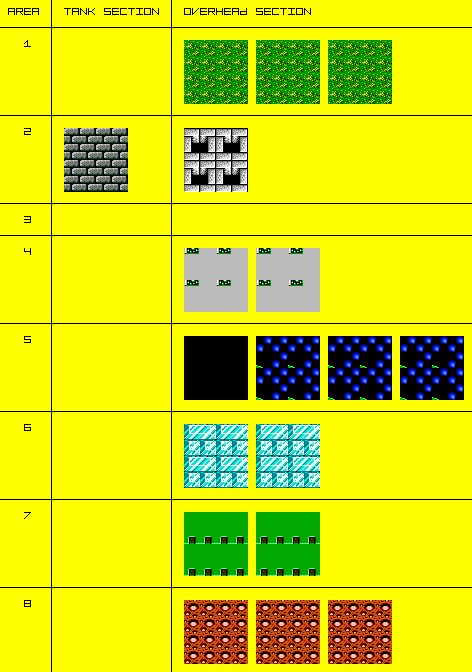 The title screen was completely changed for releases outside of Japan. The Japanese title translates to Extraplanetary War Chronicles: MetaFight (超惑星戦記メタファイト: MetaFight). The western versions have the title and Sunsoft logo flash. The European version, appearing similar to the North American version, changes the cyan color to white and has less copyright information.

An intro was added to versions outside of Japan that completely changes the plot.

In this ridiculous intro we see the hero, a boy named Jason, playing with his pet frog, Fred. Fred then escapes, hops outside, and encounters a mysterious chest of radioactive waste. Upon touching it, the frog grows large, and the combined weight causes a hole in the ground. Jason accidentally follows his frog down the hole and finds a tank that is conveniently designed to attack radioactive mutants. Thus, Jason sets off on an adventure to destroy the underground mutants and overthrow their leader, the Plutonium Boss.

In Japan, the plot is completely different and was only explained in the manual. Instead of taking place on Earth, the game takes place on a planet called Sophia the 3rd in the Epsilon Galaxy, in the year 2052 of the space calendar. The Invem Dark Star Cluster, led by the intergalactic overlord Goez, invades Sophia the 3rd. The Science Academy of Nora, a satellite near Sophia that escaped the invasion, builds a tank, Metal Attacker, to thwart the Invem. A boy named Kane Gardner is chosen to be the pilot of this weapon.

Originally the tank did not really have a name in Blaster Master, but because the display that says "SOFIA THE 3rd. NORA MA-01" on the menu screen was left unchanged, the "Worlds of Power" novelization inadvertently named the tank after the planet where MetaFight takes place and later games in the series went with that.

Since the Japanese version lacks the intro from the western version, the eerie music used is only found in the western release.

After about 13.5 seconds during gameplay demos, this strange bit of "music" plays on the digital PCM channel, producing what sounds like orchestra hits every couple of seconds. It's unknown what its intended purpose was or why it plays only during demos, though it seems to line up perfectly with the track played during the intro cinematic. Stranger still, this track is completely absent from the European version (which adds level music to the gameplay demos).

The place where the tank speeds off in the introduction to Area 1 was changed to a cave in the western versions to fit with the new intro.

The top-right section of Area 4 was changed. This is the section that leads to Area 5. To quote an interview with game designer Yoshiaki Iwata:

[T]here was a part of the map in Area 4 where the player was forced to control Jason and make a desperate suicide-leap for a ladder suspended in mid-air. We reluctantly changed that [...] following complaints from the U.S. staff.

The ending also has some changes between versions.

The tower, only shown during the ending, is different between regions. The Japanese version of the tower has a more alien-like design to go along with the extraterrestrial setting of MetaFight.

The frog buddy doesn't exist in the Japanese version, so he was added to the game's ending. They forgot to change Jason/Kane's hair color to match the new opening, though.

The Japanese version's ending shows chibi-style renditions of the game's hero and heroine, Kane Gardner and Jennifer Cornet. Jennifer, who is shown prominently on the Japanese version's boxart and even has a profile in the manual (which establishes her to be a young gifted Nora scientist serving as Metal Attacker's mechanic), never actually appears in the game outside this one image. The Sunsoft logo is also moved left a bit.

Some names in the staff roll were changed between regions.

The Japanese version has an unlimited number of continues, while the western versions have only 4. However, in both versions, the number on the continue screen is not displayed.

The Japanese manual does claim that only 5 continues are possible, however. It may have been a planned feature that was left out by mistake, which they had time to add in when the US version was developed.

All versions use signature $0123 at RAM address $3F3 to detect soft reset. All versions initialize RAM only on hard reset. But only the western versions always reset variables at $99 (upgrades), $3FB (defeated bosses), $3FC (upgrades) and $3FE (level 1 gate miniboss, level 4 locks) after intro animation. E.g. in the Japanese version soft reset keeps collected tank upgrades and a list of defeated bosses. This allows players to quickly return to the beginning of the game without losing progress. This makes sense because continues are unlimited anyway. However, these variables are cleared after the game has been completed, so starting a new game after final credits will not keep progress. But for some weird reason variable at $3FB is set to $00 immediately after the final boss is defeated, so soft resetting in the Japanese version after defeating the final boss but before the end credits end will keep all upgrades but will also revive all bosses.

The European version has some developer notes not present in the other versions:

The European version has a few extra glitches not found in the other versions: