Breath of Fire is the first in a series of RPGs made by Capcom. This first entry was published by Squaresoft because Capcom USA didn't know how to translate and promote RPGs. Given how the sequel's translation turned out, maybe they should have kept this arrangement going...

The game contains a number of unused items that can be hacked into your inventory via codes.

This is a developmental item that will allow your party to warp to any location in the game. It was mistakenly left on the list of items that came with the game. A complete list of everywhere the DrWarp can send you can be found on the notes page.

Using it, you can access three unused areas: the unfinished Nanai Bar, a glitchy house in Nanai, and a large, unfinished shrine.

The Japanese name of this item is "どこでもドア", which matches the name of the magical teleportation door used by the Japanese cartoon robot cat Doraemon. Considering what the debug item does, it's very likely meant as a reference to Doraemon. Official English translations of Doraemon call the door the "Anywhere Door". Thus, the heavily-truncated name "DrWarp" possibly meant "Door Warp", rather than "Doctor Warp" or "Developer Warp". 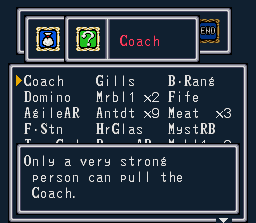 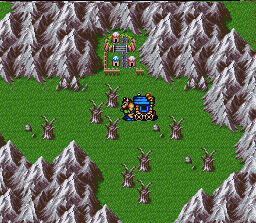 This item's description states that only a very strong person can pull the coach. It doesn't do anything as an item, but can be equipped on Ox as an accessory, and provided he isn't fused with Karn, his overworld sprite will change to that of him pulling a coach, the graphics of which are not used anywhere else in the game. This has no effect on gameplay, however. 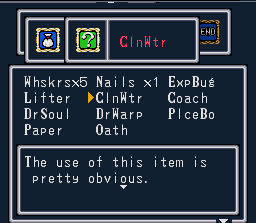 Unlike the DrWarp and Coach, these items don't do anything whatsoever. Each one has the same unhelpful description used normally for some key items ("The use of this item is pretty obvious. It's just what the name suggests."), and can't be used, discarded, sold, or anything else. With the exception of the ClnWtr, DrSoul, and Lifter, all of these names are exclusive to the English version.

There is a surprisingly large number of blank pieces of equipment, most of which is character-specific. They all work fine, and most have stats, some of which are beyond anything normally available.

This strange object is loaded into VRAM on the world map, along with the other field items (meat, antlers, apples, coconuts, etc.). No idea what it could possibly be.

There are a few unused areas, accessible via the DrWarp. A glitch in the original Japanese release allows visting most of the locations in Nanai, though the item shop remains inaccessible. In the first release, if the player skipped Camlon one of the Nanai guards that is supposed to be impassable is incorrectly set to wander instead of stand still, allowing the player to visit a Nanai mostly free of guards.

Normally there is a guard in Nanai that will kick you out before you can ever enter the item shop.
But by hacking the DrWarp into your inventory and going to map 0023, you will warp to Nanai in the daytime with the guard out of the way.
It is actually a standard item shop and fully functional.
The most unusual item in the shop is Curex9 for 4500G. There's no way you can afford it at such an early point in the game, and no way to return once you advanced the plot. Cures are normally sold alone at 2000G apiece, and they are only sold at the bulk rate inside the two dream worlds, which cannot be exited once entered except by completing the story events, and cannot be returned to once the story event has been completed. 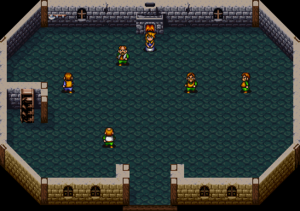 By hacking the DrWarp into your inventory and setting it to location 0023, you will be able to explore Nanai during the day. Nanai is home to one of the game's two bars, but it is inaccessible during normal gameplay, as Nanai is blocked off by soldiers during the day and a sleeping guard blocks the bar's door at night.

The "bar" itself is rather unspectacular, however. It doesn't actually resemble a bar at all – it's just a duplicate of the elder's house in Drogen. There are a few people wandering around that spout stock dialogue heard throughout the rest of the game, and a square of floor a few steps below the fireplace that can't be walked over (this is where the treasure chest is in the identical house in Drogen). The most fascinating part is that the bar's music is not heard anywhere else in the game. The bar can also be warped into directly by setting DrWarp to 0043. 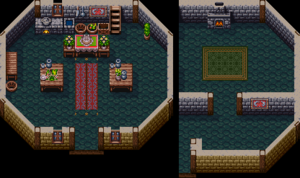 The glitchy house, in full.

Another odd building in Nanai that's usually blocked off but can be accessed via DrWarp is the largest house in the upper-left corner of town. The right side of it appears to be half of a larger building, while the left side appears to be normal, yet inaccessible, as attempting to enter any of the black space will cause you to exit. You can warp to it directly by setting DrWarp to 0044, which reveals that it looks much like the Tantar mayor's house during the wedding sequence, albeit with some graphic glitches. The staircase doesn't work. 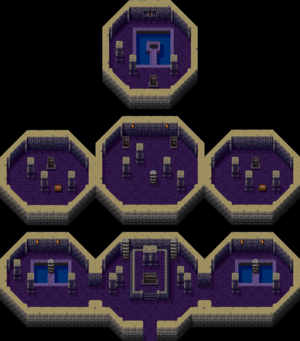 The shrine, in all its incomplete glory!

There is another unused area that can be accessed by entering 0071 on DrWarp. It appears to be an incomplete dungeon or shrine with purple floors. The exterior of the area is a ruined dragon shrine identical to the one on the island north of Gramor. The interior of the shrine has several stairs going up and down, and two side chambers that both have a set of stairs leading up into a small room with a treasure chest that cannot be opened. This area has random encounters with blue slimes.

The upwards stairs in the main chamber lead to a room that has an altar with nothing on it. But if you search the altar, the game freezes. It seems likely that it would've been a save point, but the Dragon Lord statue is missing. The downwards stairs of the main chamber take you to a scrambled room that eventually warps you to the Obelisk dig site at Scande.

Attempting to exit the shrine places you on the world map just outside Drogen.

This is the song that can be heard in the unused bar, as seen in the section above. It is not used in any place that's accessible during normal gameplay.

Much, much lesser known than the other unused song, as this one doesn't play anywhere in the game, although it sounds like it could have been intended for part of the ending.

While not unused, there is a couple obscure cutscenes players are likely to miss.

This is probably less missable, though. When encountering the Tuntar chief at the end of the forest fortress, he will ask if the player wants to go to the stored weapons. The thing is, the player needs to answer No to the same question THREE times and they will activate a cutscene variation that also skips one of the two boss consecutive fights. Most veteran RPG players would likely assume it's a But Thou Must after the first or second response. 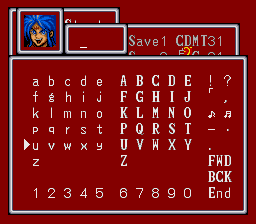 The devs left in a secret way to warp to various points of the game, presumably for testing purposes. This is done by a convoluted method of controller input on Ryu's naming screen, followed by entering a specific name for Ryu:

1. On the naming screen, hold the A+Y+L+R buttons on Controller 2. While these are held, press Up x4, Right x2, Down x8, left on Controller 1. The screen background color should turn red. If it hasn't, back out of the naming screen and try again. 2. Enter one of the following names (all of which reference characters (Ryu, Chun-Li, Vega, Ken, Dee Jay, and Fei Long) from the Street Fighter series) for Ryu. They are case-sensitive:

The Japanese version also accepts "ボ" as a first character, but rejects everything afterwards. It is assumed this is the equivalent of "Fei" in the US version, but disabled because the Fei code is basically useless.

Fei : This one is interesting. Ryu is stated to be level 1 on the file screen. It begins to play an ominous, imperial theme when loaded, but quickly fades out and goes back to the title screen where all controller input is refused until the demo plays all the way through, then the title will operate normally.

Karn, whose name was Danc in the Japanese version, received a "race-lift" in the overseas release, going from a pale, almost ash-grey skin-tone with full lips and curly hair to vaguely Arabian-looking with small lips and straight hair. Given that the face portrait seems to be done in the stereotypical (and culturally offensive in the West) "Blackface"-style, it isn't too surprising this was changed.

P-Bug/Graniddo: In the Japanese version, the enemy Graniddo (グラニッド) will usually attack the player with a small chance of using a Poison move, which doesn't do immediate damage but inflicts Poison status on the player. In the English version (where it is known as P-Bug), it will Poison you every time.
As this is a very common enemy at the beginning of the game, you'll probably need to blow most of your money on Antidotes to cure the inevitable poisoning each time. 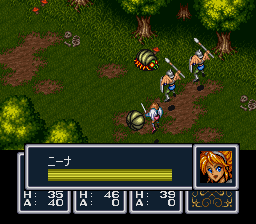 As is common for games translated by Ted Woolsey, many character names were changed. The playable characters are listed below even if their name didn't change.

One interpretation of the above is that Mr. Woolsey may have attempted to keep important names at four characters long, even though this was only mandated by the game's programming for the eleven playable characters.

The soldiers were given meaningful names in the Japanese GBA release, but this was not retained for the English GBA release, which reused the Woolsey translation.