A dancing game featuring a host of varied characters and music styles. Not to be confused with the puzzle game. A sequel was released a year later... or longer, as far as America is concerned... or never if you're European.

The game received a number of changes when it was localized for North America and Europe. The most obvious was the name change from Bust A Move to Bust A Groove to differentiate the game from the puzzle series. 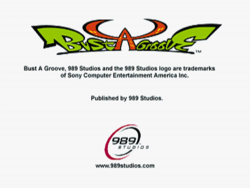