Carmageddon II is the sequel to Carmageddon. The graphics, physics, items and a lot more have been updated, but the goal is still the same: race, wreck, or wreak havoc amongst the populace. For the most part.

After completing the game, the player is rewarded with all the cars in the game, including some extra ones that never show up as opponents. However, one of them, the Digga (supposedly driven by Ron Dumpster), is a bit different - It doesn't exist! While it's selectable, it doesn't have a driver portrait, car picture, status icon, textures or model! As a result, it'll crash the game if you attempt to drive it. It does however have a description, a short name ("Ron"), a cost and a strength value. Due to SCi forcing Stainless to finish the game ahead of schedule, the Digga simply wasn't finished.

What was completed was later leaked out to the Carmageddon community, who finished it as a fan-mod.

These powerups cannot be obtained normally, but can be obtained with the cheat mode, or by writing their cheat code, if there is one.

Carmageddon II was likely designed to have cops that follow you around, much like the original Carmageddon. Two unused power-ups remain, leftovers from the first game. Frozen cops and Turbo cops, which would freeze the cops in place for 30 seconds, and make them faster for 30 seconds, respectively. These power-ups have no effect, not even on the cop opponent, and can only be accessed through cheats. 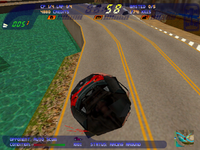 This weird mode can only be accessed via a cheat code, though that code was never published. Through community efforts, some cheat codes have been found that trigger this mode, with the most appropriate one found being EZPZKBALLXXEWAZON. When activated, it turns the player's car into a giant invulnerable ball of pain. It's very large, a pain to control, does huge damage to opponents, and is noticeably unfinished, as it tends to crash the game if you activate it too close to a wall or activate it too many times. The text related to it is hardcoded inside the executable, strangely.

Neil "Nobby" Barnden over at Stainless recently elaborated on the origins of this weird mode: "The Steel Gonad o' Death was a physics test of spheroid physics shapes, it was a bit buggy IIRC and so never made it into the released games".

The sound files can be found in the DATA/SOUNDS, all in .wav format. The following ones aren't used:

Also, it should be interesting to note that the penguins in the game make cat sounds. Maybe cats were meant to be implemented at one point? Reindeer also make cow noises. Both the penguins and the reindeer might have been implemented too late to have sounds.

These are unused strings inside TEXT.TXT:

The penguins have a bloody texture for when they die, same as every other pedestrian. In the final game, when you kill them, their heads and limbs get bloody, but not their stomachs, for some reason. The gore textures are all in the same file, the game probably doesn't load this texture due to programmer oversight.