Club Penguin: Elite Penguin Force: Herbert's Revenge is the sequel to the original DS game, now with ported missions from the Adobe Flash game. Revive your times as a PSA Agent and stop the evil schemes from that no-good Herbert once again!

In Mission 8, the player wears a crab costume in order to infiltrate Herbert's secret base. There are unused sprites for an earlier, much different version of the disguise.

Interestingly enough, this early version of the disguise is seen in early prerelease screenshots.

In the final mission, Dot has some extra dialogue if you speak to her on the mountain at the beginning. However, since you get teleported away to the mine shack before you can interact with anything, you can never actually click on her to make her say it. Using an Action Replay code to return to the room will allow you to interact with her.

Some rooms have been left over from the previous game. Not all of them are intact.

During the flood, you cannot access the Coffee Shop. However, using a code to teleport inside lets you see that there is water by the door. This could mean that the Coffee Shop was meant to be accessible during this mission.

The names of C4_IceBerg_DuckFloat and C4_Dojo_OctopusFloat seem to imply that they were meant to be found at the Iceberg and Dojo. In the final game, the duck float can be found at the Ski Village, and the Octopus is in the Lodge Attic. This also suggests that the Dojo was supposed to be accessible at some point.

There is a seemingly unused track in the game, with ID 19. It may have been planned for the Stage, as it sounds similar to the music used during the Stage play The Penguins that Time Forgot in the online game. There's also alternate versions of 3 tracks from the game. The unused tracks can be accessed with the following code:

replace ?? with one of these IDs:

An unused cutscene depicts two penguins playing mancala in the water. It was likely intended to be played at some point during the flood or the subsequent party.

The unused scene from the game's trailer (depicting Rookie spying on Herbert at the Ice Rink), as well as a second cutscene are still present in the game's files, and can be viewed with the debug menu's cutscene viewer (see below). 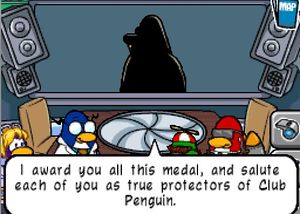 The Director commends you in this unused ending.

Hacking to enter the command room during the final mission triggers an unused ending.
Some of the dialogue from the Director and player is used in the game's final phone call between the player and the Director. However, some of the Director's dialogue is new, as well as the inclusion of Dot, JPG and Rookie.
It appears that you do not actually receive a medal. The mission collectable screen only shows the life ring item, so this scene must have been cut before they made the item available.

The Coffee Shop interior in 'Secret of the Fur' has room ID 13, in contrast to the other missions, which use a Coffee Shop of ID 12. It's possible that this was to exclusively facilitate interaction with the hot chocolate machine in 'Secret of the Fur', yet other rooms (namely, the wilderness river) are perfectly capable of adding and removing interactions depending on the mission, so it's unclear why they had to do this. 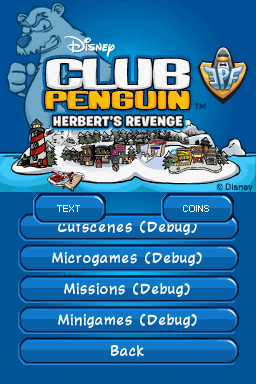 There is a debug menu still present in the game's code. It allows you to modify the player's coins, activate minigames and missions, and view cutscenes.

Once the debug menu has been accessed, the second half of the code must be changed to 00006800, or you will not be able to leave the menu.

The main difference between the American and European versions of the game is the removal of DGamer. Since DGamer is exclusive to North America, the feature was removed in the European version, although many files from DGamer are left in the ROM.

Another minor change is the Puffle Whistle. When using the menu in the European version, the music lowers its volume automatically in order to detect better audio from the microphone. This doesn't happen in the American version.

If the game detects that it is being played through unofficial means, like an old flashcard, a faulty emulator or a ROM loader like TWiLight Menu++ (before v9.3.0), the Puffle Whistle will be inaccessible through every mission, rendering the game unbeatable.

Inside the /dgamer/ folder is a XML file named DGamer.xml.
The file itself contains general settings for DGamer on the DS, but it also has a few dev comments in it.