GingerBrave and his quirky friends decide to stop running and make their own kingdom or something, and also choose violence. There's also some lore about the Cookie Run franchise nestled within as well. And fallen over gnomes. And lots of server maintenance.

A character who was designed to be an NPC appears in the game files, internally named npc0001. They were seen in the 2019 Devsisters Lineup Trailer, having their own menu icon, perhaps suggesting that they were intended to be playable or perhaps have a large role as an NPC, yet as of launch, they seem to have been scrubbed from the game altogether. 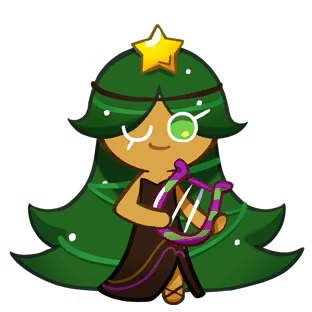 The development of Cookie Run: Kingdom was long and arduous, being reworked several times during development with the final game having several cuts of Cookies that were present in previous game builds. One of these Cookies was Carol Cookie, who was seemingly cut rather late during the rework of the game into it's current state, as she has a unique sprite for standing, as well as exhausted and menu icons, being reused from Cookie Run: OvenBreak. It is unknown what she would have done as a playable character, but she did make it into the game's launch files, only to never be used.

Every playable Cookie has an exhausted graphic in the game. Only GingerBrave's is used, when the player fails a level in Story mode. Every other Cookie does have appropriate graphics, though; but Cookies that appeared in Cookie Run: OvenBreak simply reuse their exhausted sprites from said game. The new Cookies introduced in Kingdom have completely unique images drawn, although they are rough and unfinished... Not to mention some of the Cookies are currently unplayable outside of the "The Final Battle" tutorial, with no other mention of being able to acquire them as units in the game proper. These sprites can be seen in the artbook too. (Placeholders, maybe?)

Tied to the grand launch login bonus event, there was plans to enter players into a raffle for a free copy of the Cookie Run: Kingdom Art Book if you logged in all 14 days. While there's no explicit reason why this was canned, the rocky launch the game faced more than likely meant this event wasn't going to last in the first place--perhaps the development team foresaw issues and canned it due to that?

Most of these loading screens came from the pre-registration animation video, but one can speculate that they were just placeholders to test out something else.

CookieRun: Kingdom was revealed initially in late 2018, showing a game with early animations and scrapped features, and more. Thankfully(?), some of the assets have survived the transition. these were used in said trailer, unless stated otherwise.

A plain, grassy background, that's it.

All of these are related to kingdom pass quests, or an unused series of quests.

3 unused pearl items. Uses are unknown, but it could be an early version of the Rainbow Pearl item.

The costume system was originally going to have the ability to upgrade costumes and three other rarities; Ancient and Legendary. Though as costumes are purely cosmetic, it is unknown what upgrading costumes could do.

The game also has numerous leftover (or placeholder?) sound effects from CookieRun: Ovenbreak, such as different Gacha sound effects.

In a patch in December 2021, Twizzly Gummy Cookie's touching animation was smoothen out, in order to transition to her standard pose.

The old version has him facing to the left, but the new version is at the right. Redrawn again.

The Android version of Cookie Run: Kingdom utilizes an anti-cheat method to prevent playing the game. While how it exactly works is rather unclear, it can be seen that when the game is launched, the game will check for all of the apps installed on the user's device. If an app that is blacklisted is detected to be installed, the game will intentionally crash itself. Occasionally, a small popup with the title of the package saying that the game cannot run with the installed app will appear, but this is rare.

A full list of apps that are blacklisted by the game is currently unknown, but a few of the known blocked apps are: