The game was originally teased as CookieRun: Puzzle in 2017 and CookiePuzzle in early 2019, then softlaunched later that year as CookieRun JellyPop, before officially launching in January of 2020 as Hello! Brave Cookies. They just can't make up their mind on this game.

Early cookie and pet graphics that are in a different art style than the final game. 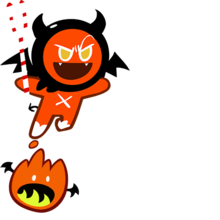 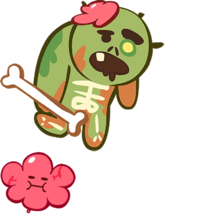 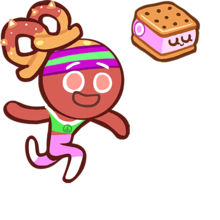 Early episode icons, also lacking the final game's distinctive artstyle. All of these have since been redrawn and properly released.

The combo for "Legendary!", featuring Moonlight Cookie. This was later redrawn with the current artstyle.

A coin texture found in CookieRun JellyPop. Coins weren't in the base game, but were later added in Hello! Brave Cookies.

Graphics for a pinwheel are included in the "Shuffle" message that appears when no possible moves remain. It is possible that this may have been the scrapped "Bear Jelly Windmill" item.

A weird image with a filename in korean. Appears to showcase a screenshot of Popcorn Cookie's world map, with some sketches of some objects, alongside another korean file, this time a screenshot of Hello! Brave Cookies' title screen.

Strange placeholder images labelled Train_Body, Train_Station, Train_Head, and Train_Sign. Funilly enough, Train_Station.png seems to be a screenshot of Stardew Valley. These would later be replaced with the train gimmick introduced in Wizard Cookie's episode.

In the Cookie Run: Puzzle World update, every Cookie was given Cookie Berries to be unlocked from their quest, used for upgrading. With GingerBrave being a starting cookie and Snow Sugar and Cherry Blossom Cookies being event cookies, they don't have their own quests or berries, however, they do have these placeholders for them.

Lemon cookie's second cutscene track in the game files only plays for a split second after the screen is tapped before being replaced with Wind Archer Cookie's cutscene theme, also making Lemon Cookie the only cookie to reuse another cookie's track. This song is actually a reference to the track which originates from This Tweet, as well as a facebook post.

These music tracks were present in the files of the original release of the game when it was known as CookieRun: JellyPop. They were removed after a few updates.

Titled Bgm_Cutscene_01, this was likely meant for an early form of cutscenes in an early build. Cutscenes were not added until the game's rebranding, and each cutscene used its own independent music track for each cookie. The file "audio.txt" describes it as "Tutorial Cutscene BGM".

Titled bgm_mycookies, this was likely meant for an early Cookie menu. In the final game, the Cookies menu is consolidated to the lobby and has no distinct music track.

It's likely this was used in one of the many early builds, as in a Early prerelease screenshot, Pilot Cookie is seen being used as a stage gimmick, lining up with the unused sound effects, in the same screenshot, 5 Cookies are used at once, so having the Cookie menu have its own song would've made alot more sense. The audio.txt file describes it as "Inventory BGM".

Titled bgm_worldmap_themea1, this was most likely an early world map theme. The final game does not have a world map, but a map-like area is used for the Special Episodes. A world map was later added for the Cookie Run: Puzzle World update, however it used the same lobby theme introduced in CookieRun JellyPop.

Files for Pilot Cookie, titled Sfx_Pilot_Arrival and Sfx_Pilot_Move. These are most likely from the same build From this early prelease screenshot, as Pilot Cookie is being used as a stage gimmick there.

Titled Sfx_Alien_Donut_Mission_Complete, this was probably some form of early mission objective. There's also sprites alluding to these missions.

Sound files relating to leveling up cookies and hatching pets. As of the Cookie Run: Puzzle World update, cookies can level up, however these sound effects remain unused.

Ominous text exclaiming that GingerBrave has escaped from the Oven.

Unused text referring to items that currently are not in the game.

Episode lineup after the Hello! Brave Cookies release. It's worth noting Whipped Cream and Hero got their episodes switched, and Cream Puff replaced Squid Ink.